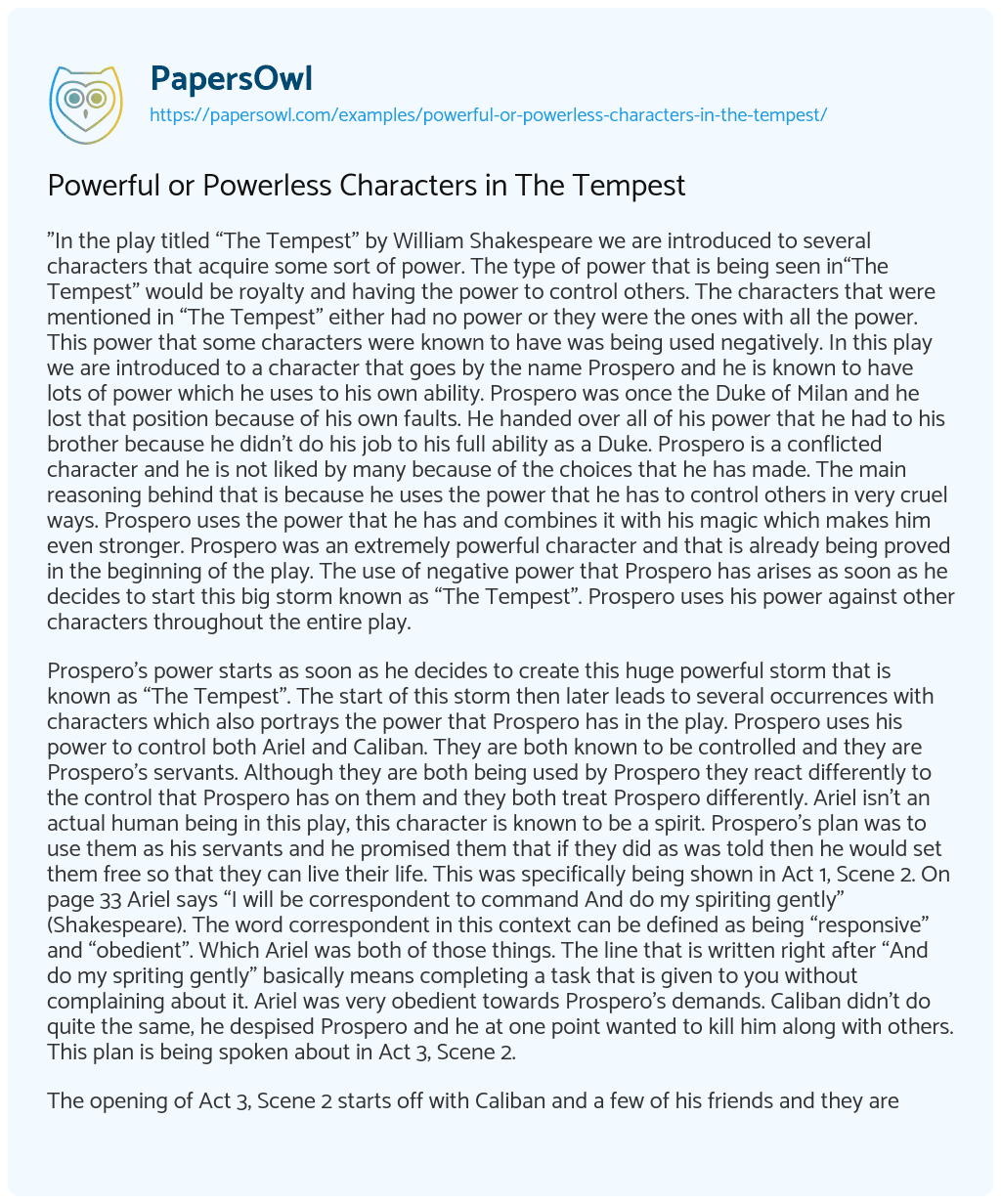 “In the play titled “The Tempest” by William Shakespeare we are introduced to several characters that acquire some sort of power. The type of power that is being seen in“The Tempest” would be royalty and having the power to control others. The characters that were mentioned in “The Tempest” either had no power or they were the ones with all the power. This power that some characters were known to have was being used negatively. In this play we are introduced to a character that goes by the name Prospero and he is known to have lots of power which he uses to his own ability. Prospero was once the Duke of Milan and he lost that position because of his own faults. He handed over all of his power that he had to his brother because he didn’t do his job to his full ability as a Duke. Prospero is a conflicted character and he is not liked by many because of the choices that he has made. The main reasoning behind that is because he uses the power that he has to control others in very cruel ways. Prospero uses the power that he has and combines it with his magic which makes him even stronger. Prospero was an extremely powerful character and that is already being proved in the beginning of the play. The use of negative power that Prospero has arises as soon as he decides to start this big storm known as “The Tempest”. Prospero uses his power against other characters throughout the entire play.

Prospero’s power starts as soon as he decides to create this huge powerful storm that is known as “The Tempest”. The start of this storm then later leads to several occurrences with characters which also portrays the power that Prospero has in the play. Prospero uses his power to control both Ariel and Caliban. They are both known to be controlled and they are Prospero’s servants. Although they are both being used by Prospero they react differently to the control that Prospero has on them and they both treat Prospero differently. Ariel isn’t an actual human being in this play, this character is known to be a spirit. Prospero’s plan was to use them as his servants and he promised them that if they did as was told then he would set them free so that they can live their life. This was specifically being shown in Act 1, Scene 2. On page 33 Ariel says “I will be correspondent to command And do my spiriting gently” (Shakespeare). The word correspondent in this context can be defined as being “responsive” and “obedient”. Which Ariel was both of those things. The line that is written right after “And do my spriting gently” basically means completing a task that is given to you without complaining about it. Ariel was very obedient towards Prospero’s demands. Caliban didn’t do quite the same, he despised Prospero and he at one point wanted to kill him along with others. This plan is being spoken about in Act 3, Scene 2.

The opening of Act 3, Scene 2 starts off with Caliban and a few of his friends and they are all heavily intoxicated with alcohol. During this time they all speak about a plan which involves killing Prospero. On page 101 Caliban says “Lo, lo again! Bite him to death, I prithee” (Shakespeare). These words are meant for Prospero. Caliban is requesting that the others participate in this plan to kill Prospero and it would work in favor for all of them. This conversation is lingering as Caliban, Trinculo and Stephano continue to plot against Prospero. The character of Caliban also says “Within this half hour will he be asleep. Will thou destroy him then?” (105).During this time Caliban feels powerful and he is in control of the others. He seems to be the one giving orders so that the others complete the task that he wishes for. He also says “When Prospero is destroyed” (107). Which shows that Caliban is feeling confident about this plan of getting rid of Prospero. It comes to show that Caliban feels obligated to be the one in control. He believes that the power that Prospero holds should be his. The spirit of Ariel is listening to Prospero and does as told meanwhile Caliban is out there planning to end Prospero’s life. This proves that although both characters are being controlled by Prospero one obeys him and the other one rebels.

Caliban wanted the life of Prospero because he wanted to be powerful. Caliban and Prospero are characters who construct the plot of the play for us. Most of the play revolves around those two characters and the situations that they are in. In the article titled “Recent Perspectives on the Tempest” by Brinda Charry it focuses on the type of character that Caliban is. Charry states “The play is thus structured around the eminence of royal power and social hierarchy, which are both challenged by Caliban, who symbolizes rebellion and disorder” (64-65). This evidence further argues that the play is centered around power and it is all based off of the social structure and background that you come from. The character of Caliban is put up for debate as he tries to challenge Prospero but, then fails. Prospero ends up staying alive and he ends up imprisoning Caliban and the other drunks who tried to do him wrong. This comes to show that Prospero was always the character that had all the power and that no one was able to overpower him. During the 17th century in England the terms New World and Old World were very important and they were being linked to the kind of character that Caliban was in “The Tempest”. In the article written by Charry it compares the character of Caliban to the natives. Caliban’s character seems to be stuck between the regulations of the Old World and the New World. In the article it talks about how Natives were under constant control so they did not have power. When in comparison to “The Tempest” Prospero was the one who had all the power over Caliban. During this time the natives were being placed under a term known as ‘cannibals’ which in this context meant that you had characteristics in you that make you savage. Which would be considered to be a negative trait in a person.

With the idea of Prospero being powerful comes also the usage of his magic. This ability of being able to perform magic on others makes the character of Prospero even more powerful. In the article it states “In Hulme’s reading, Prospero’s magic is equated with the colonizers technology” (71). This is saying that during this time in history Prospero’s magic was the same as the technology that the colonizers had such as gunpowder. In comparison both of these sources were of important use to Prospero and the Natives. As this article continues to speak about Caliban it argues that “Caliban talks back to Prospero but is also trapped in a double bind as both ‘slave’ and ‘conspirator’” (71). These were terms being used during this time in history to describe people. Caliban was known to be a slave because he was under the control of Prospero but, he was also known to be a conspirator because a group of men under Caliban’s control were setting up a plan to kill Prospero. Federici in a way agrees with all that is being said here. In her article she argues that “In the eyes of his masters, it’s life was pure inertia, but at the same time was uncontrolled passion and unbridled fantasy, ever ready to explode in riotous commotions” (154). When you look at this argument in comparison to “ The Tempest” it shows the shift of characterization in Caliban as the play progresses. This states that when Caliban was under the control of Prospero he was unable to do anything his way. Prospero would be known as Caliban’s master. Caliban was so desperate for power and that can be viewed as his unbridled fantasy in this context that he decided to plot against Prospero. During that time in history the natives were under the control of their masters so they were the slaves. Prospero once again was the master and Caliban was a servant. This would also make him a servant during the 17th century.

Caliban’s plan does not go the way that he wants it to. Ariel who is a helpful servant is able to spy on the drunks as they plot against Prospero and since Ariel is a spirit they are unable to see that Spirit. Ariel helps Prospero defeat the others so that their plan does not play out. They fail and they are now under the power of Prospero. Throughout this story Prospero is constantly the one in power. He is of higher social status which also places him at the top of the royal hierarchy. The power that Prospero uses against Ariel and Caliban reveals the true colors of what those characters are actually like in “The Tempest”. Ariel stays faithful towards Prospero and she ends up being set free just as promised. Prospero frees himself from magic which then also strips him from all of his power. The last we see of Caliban is when he is still under the control of Prospero. In a way the character of Caliban was never set free because since he performed his foolish mistake he was taken into control by Prospero. Caliban becomes powerless and remains a native as Prospero remains powerful till the very ending of the play. He decided under his own conscious to set himself free from his power and magic because he comes to the realization of all the wrong he has committed.”

Powerful or Powerless Characters in The Tempest. (2021, May 24). Retrieved from https://papersowl.com/examples/powerful-or-powerless-characters-in-the-tempest/