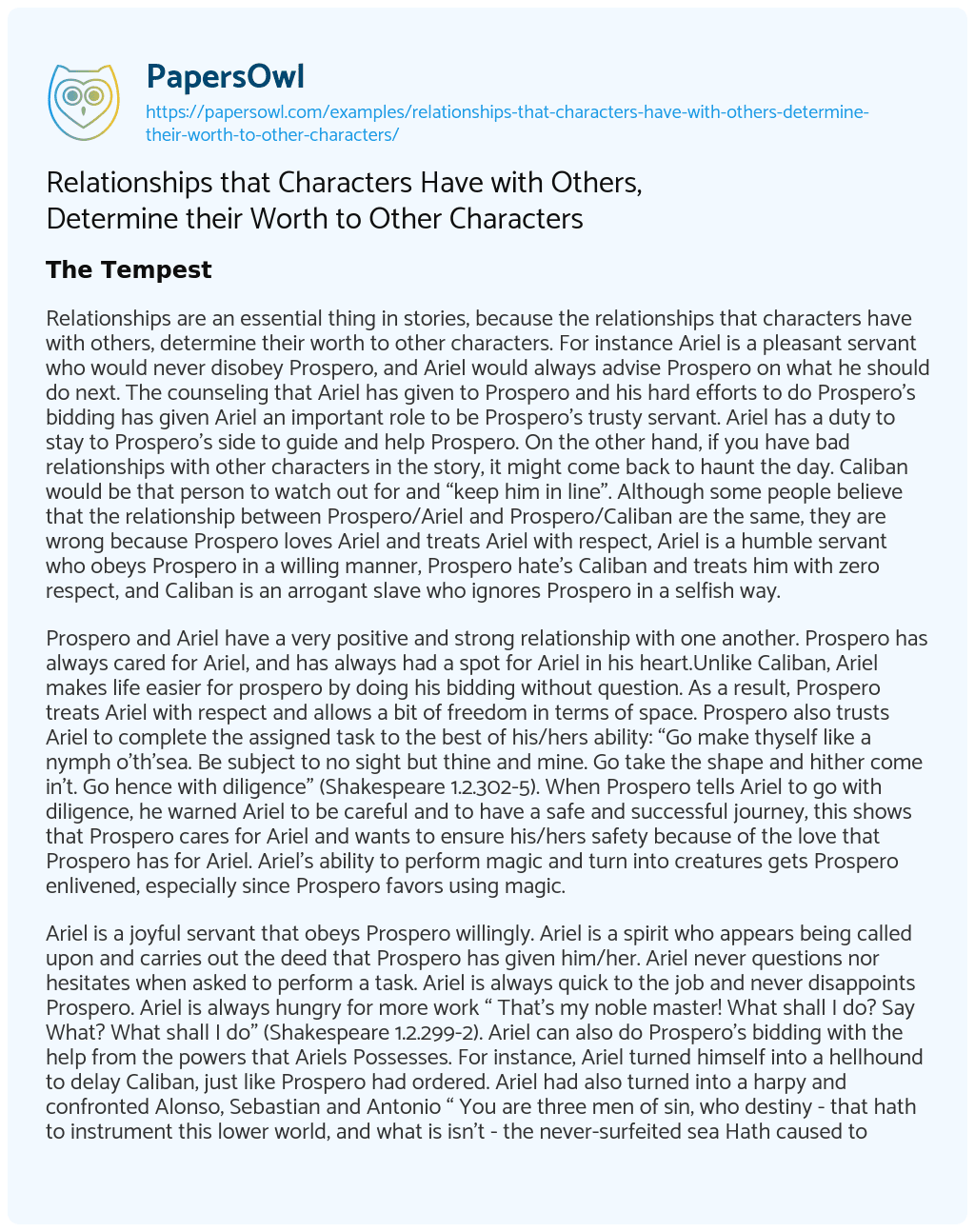 Relationships are an essential thing in stories, because the relationships that characters have with others, determine their worth to other characters. For instance Ariel is a pleasant servant who would never disobey Prospero, and Ariel would always advise Prospero on what he should do next. The counseling that Ariel has given to Prospero and his hard efforts to do Prospero’s bidding has given Ariel an important role to be Prospero’s trusty servant. Ariel has a duty to stay to Prospero’s side to guide and help Prospero. On the other hand, if you have bad relationships with other characters in the story, it might come back to haunt the day. Caliban would be that person to watch out for and “keep him in line”. Although some people believe that the relationship between Prospero/Ariel and Prospero/Caliban are the same, they are wrong because Prospero loves Ariel and treats Ariel with respect, Ariel is a humble servant who obeys Prospero in a willing manner, Prospero hate’s Caliban and treats him with zero respect, and Caliban is an arrogant slave who ignores Prospero in a selfish way.

Prospero and Ariel have a very positive and strong relationship with one another. Prospero has always cared for Ariel, and has always had a spot for Ariel in his heart.Unlike Caliban, Ariel makes life easier for prospero by doing his bidding without question. As a result, Prospero treats Ariel with respect and allows a bit of freedom in terms of space. Prospero also trusts Ariel to complete the assigned task to the best of his/hers ability: “Go make thyself like a nymph o’th’sea. Be subject to no sight but thine and mine. Go take the shape and hither come in’t. Go hence with diligence” (Shakespeare 1.2.302-5). When Prospero tells Ariel to go with diligence, he warned Ariel to be careful and to have a safe and successful journey, this shows that Prospero cares for Ariel and wants to ensure his/hers safety because of the love that Prospero has for Ariel. Ariel’s ability to perform magic and turn into creatures gets Prospero enlivened, especially since Prospero favors using magic.

Ariel is a joyful servant that obeys Prospero willingly. Ariel is a spirit who appears being called upon and carries out the deed that Prospero has given him/her. Ariel never questions nor hesitates when asked to perform a task. Ariel is always quick to the job and never disappoints Prospero. Ariel is always hungry for more work “ That’s my noble master! What shall I do? Say What? What shall I do” (Shakespeare 1.2.299-2). Ariel can also do Prospero’s bidding with the help from the powers that Ariels Possesses. For instance, Ariel turned himself into a hellhound to delay Caliban, just like Prospero had ordered. Ariel had also turned into a harpy and confronted Alonso, Sebastian and Antonio “ You are three men of sin, who destiny – that hath to instrument this lower world, and what is isn’t – the never-surfeited sea Hath caused to belch you up. And on this island, Where man doth not inhabit – you amongst men being most unfit to live – I have made you mad ; and even with suchlike valour men hang and drown their proper selves.’’(Shakespeare 3.3.53-7). The power that Ariel shows here defines him as strong, magical, and a useful tool to Prospero to use for his bidding. Ariel absolutely loves being Prospero’s servant but desires freedom after serving Prospero for a number of years.

Prospero and Caliban’s relationship is absolutely appalling and ghastly. Since Prospero trapped Caliban on the island. He hasn’t really cared what has happened to Caliban. As a result of Caliban treating Prospero with zero respect, and the fact how Caliban was conspired to kill prospero to get back for what he has done to Caliban. For instance, Prospero Confronts Caliban after he threatened Prospero harshly and didn’t even support his claims after Prospero had threatened to get rid of him and punish him for his efforts to carry out the deed to kill Prospero. Why should Prospero care about Caliban if he doesn’t put any work in or help Prospero? An example of how poorly their relationship is right now would be when Caliban threatens Prospero by saying: “You taught me language: and my profit on’t Is, I know how to curse: the red plague rid you, For learning me your language!”(Shakespeare 3.3.53-7). This shows both the anger Caliban has for Prospero after she trapped him, and this will eventually build up to Caliban’s plot to kill Prospero. Unfortunately for Prospero, he has to deal with a selfish Caliban and still manage to get things done. Prospero therefore has no choice to treat Caliban like a child.

Caliban is a lazy, arrogant and selfish slave being controlled by Prospero. He is a simple man, who defies Prospero and completely couldn’t care less about what happens to Prospero. He is completely small compared to Ariel. Caliban never thinks of anyone else, all he cares about is, what will happen to him next? Caliban is always slow to completing the work given to him by Prospero. Caliban is more likely to disobey Prospero and do what’s best for him and betray Prospero. In fact, Caliban once said that he isn’t afraid to curse at Prospero using the language that was given to Caliban By Prospero himself. Caliban even at one point completely disowns Prospero and bashes on him for what Prospero has done with Caliban, “Cursed be I that did so! All the charms Of Sycorax, toads, beetles, bats, light on you, For I am all the subjects that you have, Which first was mine own king; and here you sty meIn this hard rock, whiles you do keep from me? The rest o’ th’ island” (1.2.396-15). This shows us that Caliban doesn’t understand Prospero’s understanding and completely disagrees with Prospero’s reasoning with trapping him on the island. Because he has a completely negative attitude towards Prospero for keeping him on the island, Caliban’s overall attitude towards Prospero has just gotten sour and decaying throughout the entire play until Prospero finally frees him at the end of the play when Prospero gave up magic to be the duke of Milan.

The difference of both relationships between Prospero/Ariel and Prospero and Caliban is incredibly different. Prospero treats Ariel with 100% more respect than what he gives to Caliban for numerous reasons. Ariel possesses magical powers and uses them to do Prospero’s bidding. Ariel also never disobeys Prospero when carrying out a task, he is always quick to get it done no matter what it takes. Caliban, had he been the hand of Prospero, would absolutely slow down Prospero and cause him to have trouble when carrying out important deeds. Caliban would disown Prospero and bring shame to him. As a result, Ariel is the true hand to Prospero, a noble and true servant of Prospero. He never left the side of Prospero till the end of Prospero’s days as a wizard. When Prospero finally decided to leave his duties as a magical wizard, he wished Ariel a farewell and wished him the best. To show his kindness to Prospero, Ariel had asked Prospero, if there was anything else he could do for him, since Prospero lifted his duties to serve him. Prospero responded with “ Fair winds and Following seas” to help make his voyage back to the rest of the fleet, quick and easy.”

Relationships that Characters Have with Others, Determine their Worth to Other Characters. (2021, Apr 10). Retrieved from https://papersowl.com/examples/relationships-that-characters-have-with-others-determine-their-worth-to-other-characters/