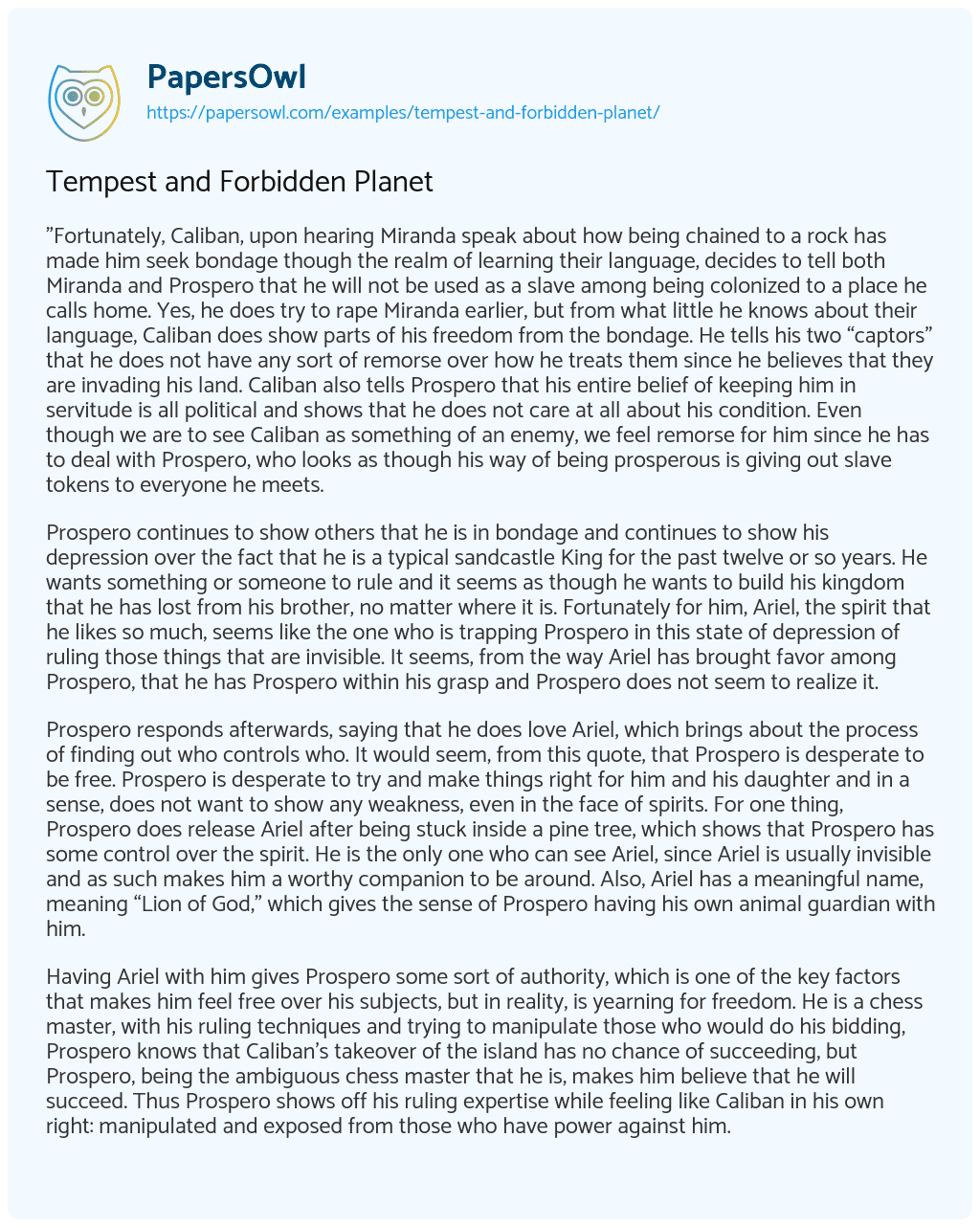 “Fortunately, Caliban, upon hearing Miranda speak about how being chained to a rock has made him seek bondage though the realm of learning their language, decides to tell both Miranda and Prospero that he will not be used as a slave among being colonized to a place he calls home. Yes, he does try to rape Miranda earlier, but from what little he knows about their language, Caliban does show parts of his freedom from the bondage. He tells his two “captors” that he does not have any sort of remorse over how he treats them since he believes that they are invading his land. Caliban also tells Prospero that his entire belief of keeping him in servitude is all political and shows that he does not care at all about his condition. Even though we are to see Caliban as something of an enemy, we feel remorse for him since he has to deal with Prospero, who looks as though his way of being prosperous is giving out slave tokens to everyone he meets.

Prospero continues to show others that he is in bondage and continues to show his depression over the fact that he is a typical sandcastle King for the past twelve or so years. He wants something or someone to rule and it seems as though he wants to build his kingdom that he has lost from his brother, no matter where it is. Fortunately for him, Ariel, the spirit that he likes so much, seems like the one who is trapping Prospero in this state of depression of ruling those things that are invisible. It seems, from the way Ariel has brought favor among Prospero, that he has Prospero within his grasp and Prospero does not seem to realize it.

Prospero responds afterwards, saying that he does love Ariel, which brings about the process of finding out who controls who. It would seem, from this quote, that Prospero is desperate to be free. Prospero is desperate to try and make things right for him and his daughter and in a sense, does not want to show any weakness, even in the face of spirits. For one thing, Prospero does release Ariel after being stuck inside a pine tree, which shows that Prospero has some control over the spirit. He is the only one who can see Ariel, since Ariel is usually invisible and as such makes him a worthy companion to be around. Also, Ariel has a meaningful name, meaning “Lion of God,” which gives the sense of Prospero having his own animal guardian with him.

Having Ariel with him gives Prospero some sort of authority, which is one of the key factors that makes him feel free over his subjects, but in reality, is yearning for freedom. He is a chess master, with his ruling techniques and trying to manipulate those who would do his bidding, Prospero knows that Caliban’s takeover of the island has no chance of succeeding, but Prospero, being the ambiguous chess master that he is, makes him believe that he will succeed. Thus Prospero shows off his ruling expertise while feeling like Caliban in his own right: manipulated and exposed from those who have power against him.

At the end of the play, during the epilogue, having been able to hook up Miranda with Ferdinand the prince, sending Ariel to check on the ships that are sailing off to Naples and returning to being a Duke, Prospero turns and speaks to the reader, (or the audience). It shows that he finally understands his role of being the controller and being controlled and as such, is hoping for repentance. He forgives Antonio (Act 5, Scene 1) for his usurping of the throne, which in turn makes Prospero feel relieved of his binds that trap him away from his freedom and confinement of the island. Seeing Miranda free from the bondage that he has placed over her, and finding her playing chess with Ferdinand (as mentioned before, Prospero is a chess master of strategy throughout the play), makes him all the more reasonable to be a person of forgiveness. Prospero, from seeing how happy Miranda is, releases Caliban from slavery (even when he was planning to try and kill him) and leaves him with the island. He tells the reader (or audience) that he shall be free from only their approval. The epilogue speech is more or less a symbolism from the ultimate freedom: “the Tempest” is usually thought out to be Shakespeare’s final written play. Therefore, Prospero, in his “prosperous” nature, wants to escape not only the island, but the theater. By letting the audience (or the reader) be part with him on the island, we too are trapped with him, and with him, we also earn our freedom. The last two lines of the epilogue: “As you from crimes would pardoned be, / Let your indulgence set me free” (Epilogue. Lines 19-20) makes Prospero a fine hero from the play and not experience tragedy from his earlier actions. Sure, he was the one who caused the actual tempest which broke the boat in half, but being the manipulator that he is (and with help from Ariel which Prospero frees), Prospero does not turn insane and instead turns away from it all, bidding farewell and ending with the word “free.””

Colonialism in the Tempest