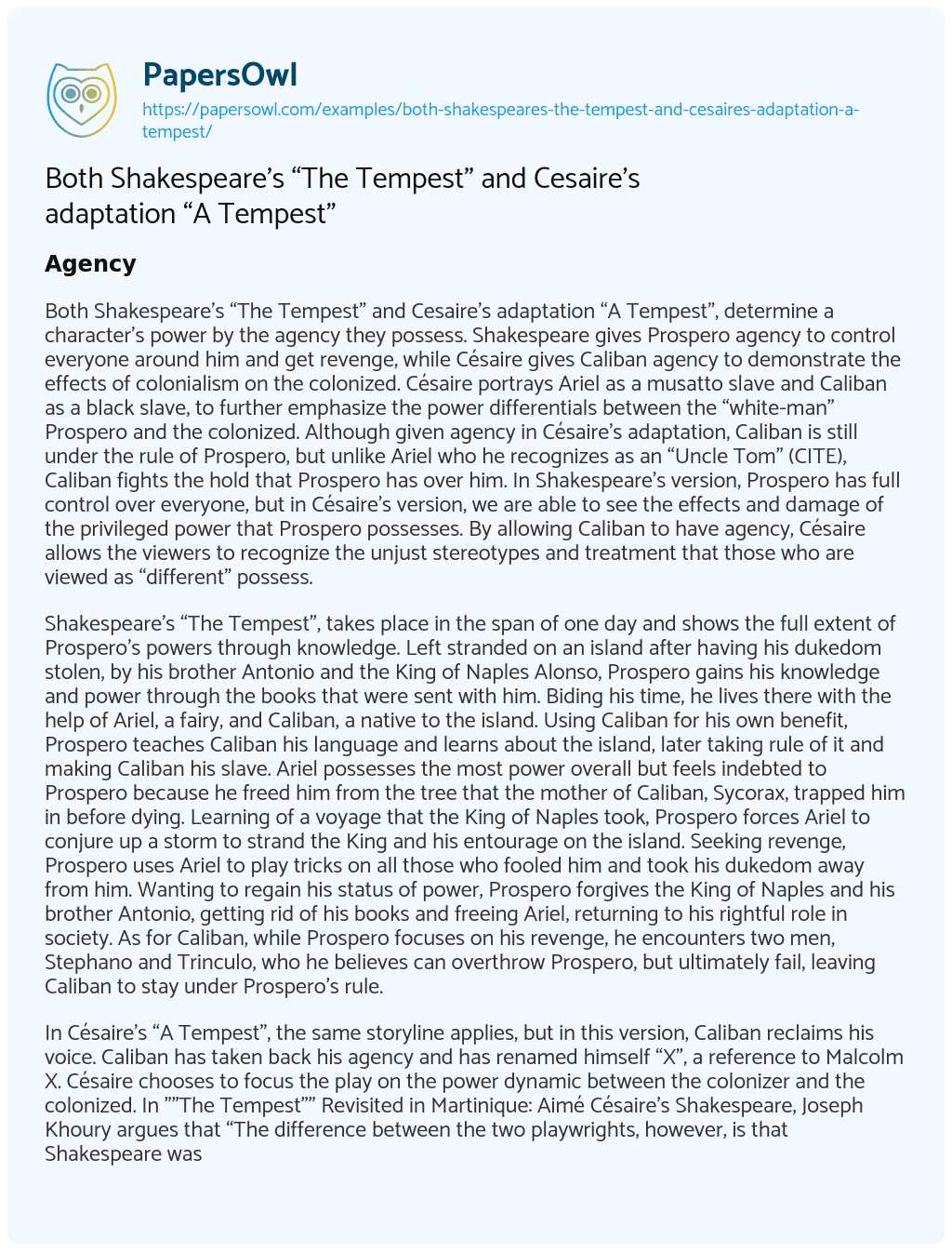 Both Shakespeare’s “The Tempest” and Cesaire’s adaptation “A Tempest”, determine a character’s power by the agency they possess. Shakespeare gives Prospero agency to control everyone around him and get revenge, while Césaire gives Caliban agency to demonstrate the effects of colonialism on the colonized. Césaire portrays Ariel as a musatto slave and Caliban as a black slave, to further emphasize the power differentials between the “white-man” Prospero and the colonized. Although given agency in Césaire’s adaptation, Caliban is still under the rule of Prospero, but unlike Ariel who he recognizes as an “Uncle Tom” (CITE), Caliban fights the hold that Prospero has over him. In Shakespeare’s version, Prospero has full control over everyone, but in Césaire’s version, we are able to see the effects and damage of the privileged power that Prospero possesses. By allowing Caliban to have agency, Césaire allows the viewers to recognize the unjust stereotypes and treatment that those who are viewed as “different” possess.

Shakespeare’s “The Tempest”, takes place in the span of one day and shows the full extent of Prospero’s powers through knowledge. Left stranded on an island after having his dukedom stolen, by his brother Antonio and the King of Naples Alonso, Prospero gains his knowledge and power through the books that were sent with him. Biding his time, he lives there with the help of Ariel, a fairy, and Caliban, a native to the island. Using Caliban for his own benefit, Prospero teaches Caliban his language and learns about the island, later taking rule of it and making Caliban his slave. Ariel possesses the most power overall but feels indebted to Prospero because he freed him from the tree that the mother of Caliban, Sycorax, trapped him in before dying. Learning of a voyage that the King of Naples took, Prospero forces Ariel to conjure up a storm to strand the King and his entourage on the island. Seeking revenge, Prospero uses Ariel to play tricks on all those who fooled him and took his dukedom away from him. Wanting to regain his status of power, Prospero forgives the King of Naples and his brother Antonio, getting rid of his books and freeing Ariel, returning to his rightful role in society. As for Caliban, while Prospero focuses on his revenge, he encounters two men, Stephano and Trinculo, who he believes can overthrow Prospero, but ultimately fail, leaving Caliban to stay under Prospero’s rule.

In Césaire’s “A Tempest”, the same storyline applies, but in this version, Caliban reclaims his voice. Caliban has taken back his agency and has renamed himself “X”, a reference to Malcolm X. Césaire chooses to focus the play on the power dynamic between the colonizer and the colonized. In “”The Tempest”” Revisited in Martinique: Aimé Césaire’s Shakespeare, Joseph Khoury argues that “The difference between the two playwrights, however, is that Shakespeare was problematizing the colonizer/colonized relationship for his strictly English (i.e. colonizer) audience, while Césaire was writing for both the colonizers and the colonized” (Khoury, 23). Portrayed as the colonizer, Prospero has enslaved Caliban and Ariel to do his will, because he feels that he is above them, viewing them as savage. Caliban and Ariel hold more agency in this play, compared to Shakespeare’s. Both Caliban and Ariel are able to see the maltreatment they receive and resent Prospero for it, but Ariel believes that his freedom lies within his obedience, while Caliban believes that his freedom must be fought for. The most noticeable difference between the two plays is the ending. While in “The Tempest” Prospero returns home, in “A Tempest”, Prospero chooses to stay on the island with Caliban, retaining his power and continuing his role as the colonial power.

Caliban understands that language was not a gift, yet rather a convenience. Prospero believes that he has educated Caliban, but Caliban believes that he has been used and taken advantage of. He rejects the language and speaks in his native tongue, something that disturbs Prospero. The unknown makes him anxious because he likes to stay in control, but Caliban uses his native language to take back a part of himself that has been taken, something that can be exemplified by the colonized.

By portraying Caliban as the victim rather than the antagonist, Césaire allows for the story of the colonized to be told. In Césaire’s version, Caliban rebels against Prospero the most, willingly showing that he will not conform to his ways. Rejecting the name “Caliban” given to him by Prospero, Caliban renames himself “X”. Caliban rejects the name because it is born out of hatred by Prospero and feels that it is used as an insult, choosing rather to go by “X”, and be nameless (Césaire, 1.2 p.349). Césaire did this as a comparison to Malcolm X, “the X representing the unknown name of his African ancestors and their culture that had been lost during slavery” (Scrimgeour). Caliban refuses to be called by a name not given to him from his ancestors (Sycorax) and refuses to take the name given to him by a colonizer and oppressor like Prospero, choosing like Malcolm X to rename himself and rebel against the power of the oppressor.

Unlike Caliban who rebels against Prospero, Ariel, also enslaved, believes that by obeying Prospero, he will eventually obtain his freedom, which he does, showing the progression of the colonized. Césaire points out that although Ariel may believe himself to be free at the end of the play, he still executed all of Prospero’s dirty work, he even goes as far as to compare him to an “Uncle Tom”, seen when Caliban calls him out for doing Prospero’s bidding. Prospero used Ariel for his own benefit and albeit kinder to him than to Caliban, he was still enslaved under him. Ariel and Caliban lie in the same boat, and although in different situations sympathize with one another. Ariel confronts Caliban and they empathize with one another’s struggles, seen when Ariel warns Caliban about Prospero, but Caliban is unafraid and willing to rebel for his freedom no matter the consequence. Caliban feels that the power that Prospero has taken away from him merits revenge, while Ariel believes that peace is the answer.

Césaire hopes to connect to his audience, the colonized, and show them that within the power dynamic of colonialism, there is room for freedom, and they are in their right to ask for it. As leader of the Negritude movement, Césaire, Cesaire’s adaptation allows the audience to see the story from Caliban’s perspective, by giving him agency, meant to help ignite the Negritude movement that Cesaire began.”

Both Shakespeare’s “The Tempest” and Cesaire’s adaptation “A Tempest”. (2021, May 10). Retrieved from https://papersowl.com/examples/both-shakespeares-the-tempest-and-cesaires-adaptation-a-tempest/

About “The Tempest” by William Shakespeare,

Colonization in the Tempest