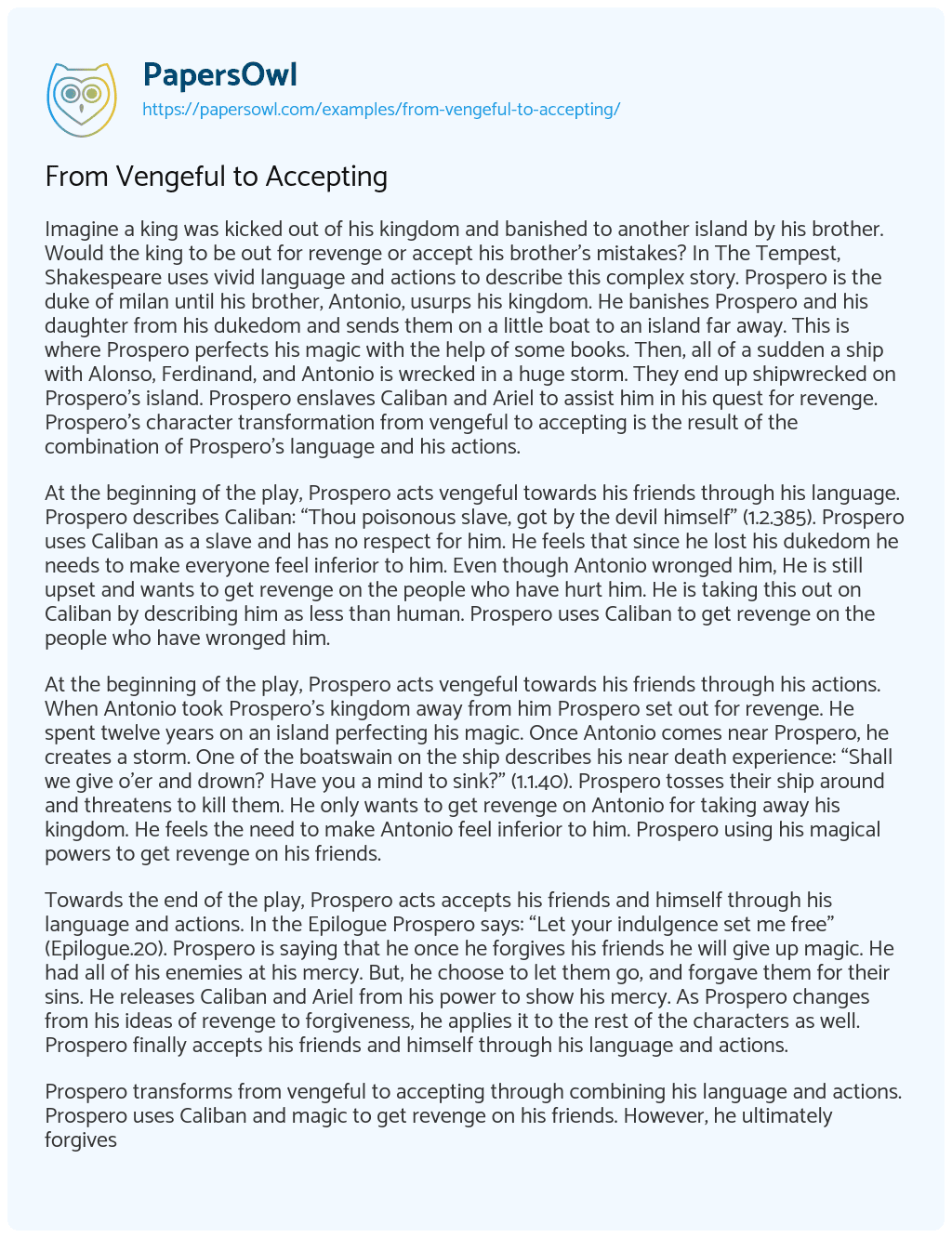 Imagine a king was kicked out of his kingdom and banished to another island by his brother. Would the king to be out for revenge or accept his brother’s mistakes? In The Tempest, Shakespeare uses vivid language and actions to describe this complex story. Prospero is the duke of milan until his brother, Antonio, usurps his kingdom. He banishes Prospero and his daughter from his dukedom and sends them on a little boat to an island far away. This is where Prospero perfects his magic with the help of some books. Then, all of a sudden a ship with Alonso, Ferdinand, and Antonio is wrecked in a huge storm. They end up shipwrecked on Prospero’s island. Prospero enslaves Caliban and Ariel to assist him in his quest for revenge. Prospero’s character transformation from vengeful to accepting is the result of the combination of Prospero’s language and his actions.

At the beginning of the play, Prospero acts vengeful towards his friends through his language. Prospero describes Caliban: “Thou poisonous slave, got by the devil himself” (1.2.385). Prospero uses Caliban as a slave and has no respect for him. He feels that since he lost his dukedom he needs to make everyone feel inferior to him. Even though Antonio wronged him, He is still upset and wants to get revenge on the people who have hurt him. He is taking this out on Caliban by describing him as less than human. Prospero uses Caliban to get revenge on the people who have wronged him.

At the beginning of the play, Prospero acts vengeful towards his friends through his actions. When Antonio took Prospero’s kingdom away from him Prospero set out for revenge. He spent twelve years on an island perfecting his magic. Once Antonio comes near Prospero, he creates a storm. One of the boatswain on the ship describes his near death experience: “Shall we give o’er and drown? Have you a mind to sink?” (1.1.40). Prospero tosses their ship around and threatens to kill them. He only wants to get revenge on Antonio for taking away his kingdom. He feels the need to make Antonio feel inferior to him. Prospero using his magical powers to get revenge on his friends.

Prospero transforms from vengeful to accepting through combining his language and actions. Prospero uses Caliban and magic to get revenge on his friends. However, he ultimately forgives them for hurting him. Even though Prospero’s friends were planning to kill him and his brother took away his kingdom, he still forgave them. Prospero proves that forgiveness and understanding ultimately trump revenge. The king forgave his brother after all.”

From Vengeful to Accepting. (2021, May 10). Retrieved from https://papersowl.com/examples/from-vengeful-to-accepting/