Mystery in Play the Tempest by Shakespeare 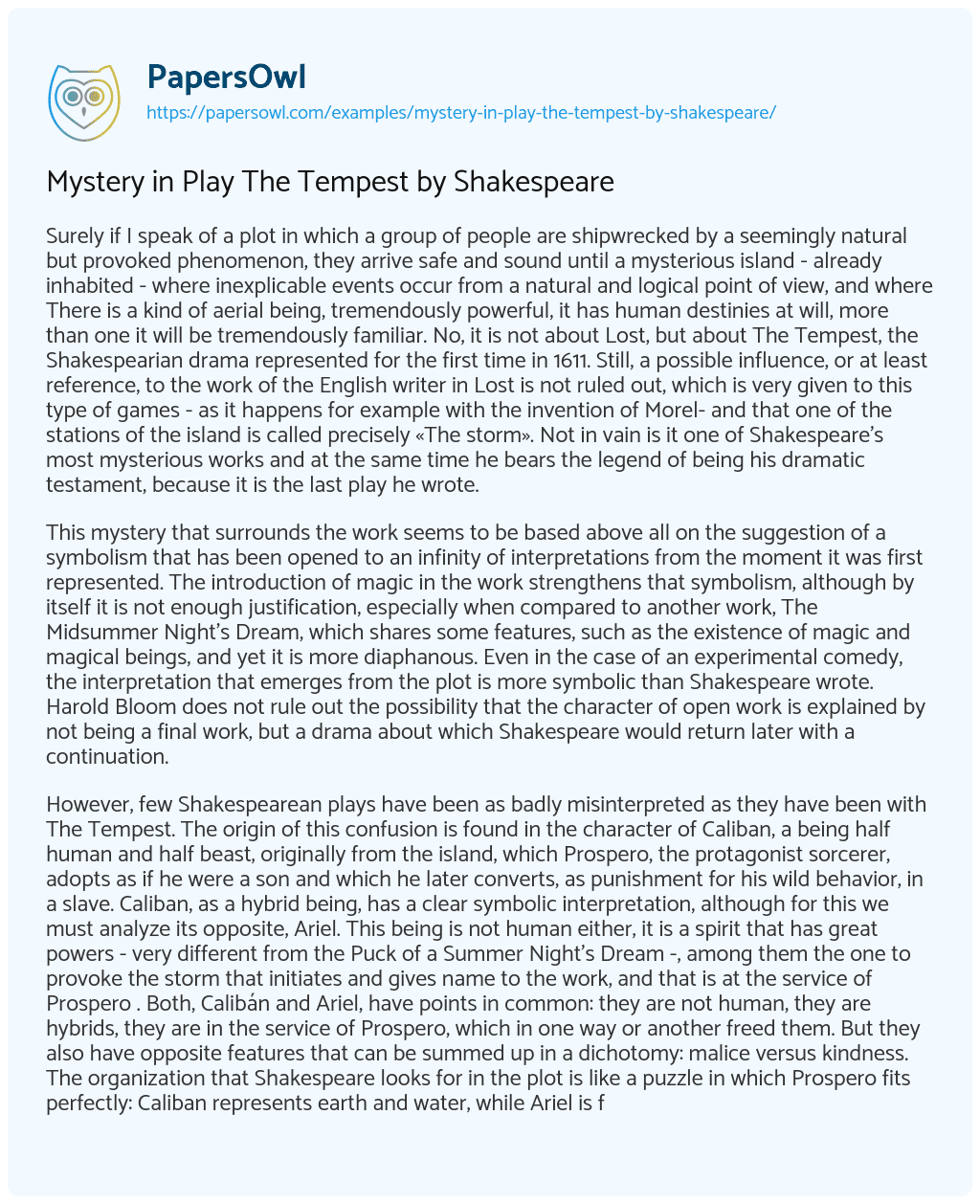 Surely if I speak of a plot in which a group of people are shipwrecked by a seemingly natural but provoked phenomenon, they arrive safe and sound until a mysterious island – already inhabited – where inexplicable events occur from a natural and logical point of view, and where There is a kind of aerial being, tremendously powerful, it has human destinies at will, more than one it will be tremendously familiar. No, it is not about Lost, but about The Tempest, the Shakespearian drama represented for the first time in 1611. Still, a possible influence, or at least reference, to the work of the English writer in Lost is not ruled out, which is very given to this type of games – as it happens for example with the invention of Morel- and that one of the stations of the island is called precisely «The storm». Not in vain is it one of Shakespeare’s most mysterious works and at the same time he bears the legend of being his dramatic testament, because it is the last play he wrote.

This mystery that surrounds the work seems to be based above all on the suggestion of a symbolism that has been opened to an infinity of interpretations from the moment it was first represented. The introduction of magic in the work strengthens that symbolism, although by itself it is not enough justification, especially when compared to another work, The Midsummer Night’s Dream, which shares some features, such as the existence of magic and magical beings, and yet it is more diaphanous. Even in the case of an experimental comedy, the interpretation that emerges from the plot is more symbolic than Shakespeare wrote. Harold Bloom does not rule out the possibility that the character of open work is explained by not being a final work, but a drama about which Shakespeare would return later with a continuation.

However, few Shakespearean plays have been as badly misinterpreted as they have been with The Tempest. The origin of this confusion is found in the character of Caliban, a being half human and half beast, originally from the island, which Prospero, the protagonist sorcerer, adopts as if he were a son and which he later converts, as punishment for his wild behavior, in a slave. Caliban, as a hybrid being, has a clear symbolic interpretation, although for this we must analyze its opposite, Ariel. This being is not human either, it is a spirit that has great powers – very different from the Puck of a Summer Night’s Dream -, among them the one to provoke the storm that initiates and gives name to the work, and that is at the service of Prospero . Both, Calibán and Ariel, have points in common: they are not human, they are hybrids, they are in the service of Prospero, which in one way or another freed them. But they also have opposite features that can be summed up in a dichotomy: malice versus kindness. The organization that Shakespeare looks for in the plot is like a puzzle in which Prospero fits perfectly: Caliban represents earth and water, while Ariel is fire and air; in front of them Prospero is the one who dominates the four elements, it would be, therefore, the fifth element. It fits perfectly with the character, who combines equal parts magic and wisdom, as it emerges from the path towards hermetic knowledge.

opposite to Ariel, who has a great importance within the action, Calibán, with apparitions counted, is a personage who in the work does not have too much relevance, and that produces at times commiseration and at times contempt. But this character is going to be the basis of a completely erroneous interpretation that has little to do with the initial perspective with which Shakespeare wrote The Tempest. The current vision of the work wrongly tends, on many occasions, to interpret Prospero and Caliban as colonizers and colonized respectively. The reading between the lines allows a partial assessment: Prospero arrives on the island as an invader, destroys Sycorax, which represents the barbarism of the land, takes his son Caliban for adoption, whom he will try to civilize uselessly – through the language and customs. To this reductionist interpretation point partisan views that use the anachronism interested to read works of the past with parameters of the present, as it happens with Rubén Darío and his work “El triunfo de Calibán”, which denounces the materialistic barbarism of the United States, or in that same felt José Enrique Rodó in his essay «Ariel». It is as if the indigenous identity is lacking in icons and we should use Shakespeare, who of course would never have understood his work in such terms. For the English poet Calibán is a monstrous being who, at most, can arouse compassion, but in no case is he the hero that later he wanted to see in books like Tomás Cartelli, Prospero in Africa: The storm as a text and colonialist pretext.

More accurate is the reading proposed by Harold Bloom, for which Prospero is the anti-Faust, a response and at the same time an attempt to overcome Doctor Faustus of Marlowe. He is a tremendously cold character, who does not arouse sympathies -when the work appears he loses part of his comic character- because he deals harshly with all those who are in charge of him. Caliban comes to threaten him in these terms: “Get out, spawn! / Bring us firewood and you better not be late […] / If you neglect or do your work / unwillingly, I torture you with cramps / I put the pain in your bones ». One of the great mysteries of The Tempest resides precisely in Prospero. First, because he constantly expects from him a wisdom that has not just arrived and then because his final behavior is an enigma. In spite of his character, he decides to pardon the traitors, who have no more punishment than recrimination, and decides to leave the island and its magic to return to be the Duke of Milan. It does not seem too logical that Próspero abandons such an immense power, capable even of resurrecting the dead, in exchange for a political office, no matter how much authority it gives him.

As the logical renunciation of magic does not seem logical either, on noticing that he will break his rod and that he will throw away his book – understand spells or simply knowledge – to the sea. Especially if one considers that Prospero does not enter the magical arts on the island, but that magic is precisely the element that has led him to the situation in which he finds himself, because the obsession with magic was the reason by which his government became careless and opened the way for his brother the traitor. What misses the viewer is the absence of justification in the resignation, when precisely everything seemed to indicate that Prospero was on a higher plane than the material ambitions. Of what there is no doubt, although it may have been able to mythologize the work, is that, following once again to Harold Bloom, Shakespeare initiates, already in its last stage, a way of making comedies different. A way that will not be much less fruitless, with attempts to improve like the one Beckett does in the Final game, which is a mixture of Hamlet and The Tempest.

Mystery in Play The Tempest by Shakespeare. (2021, Apr 15). Retrieved from https://papersowl.com/examples/mystery-in-play-the-tempest-by-shakespeare/