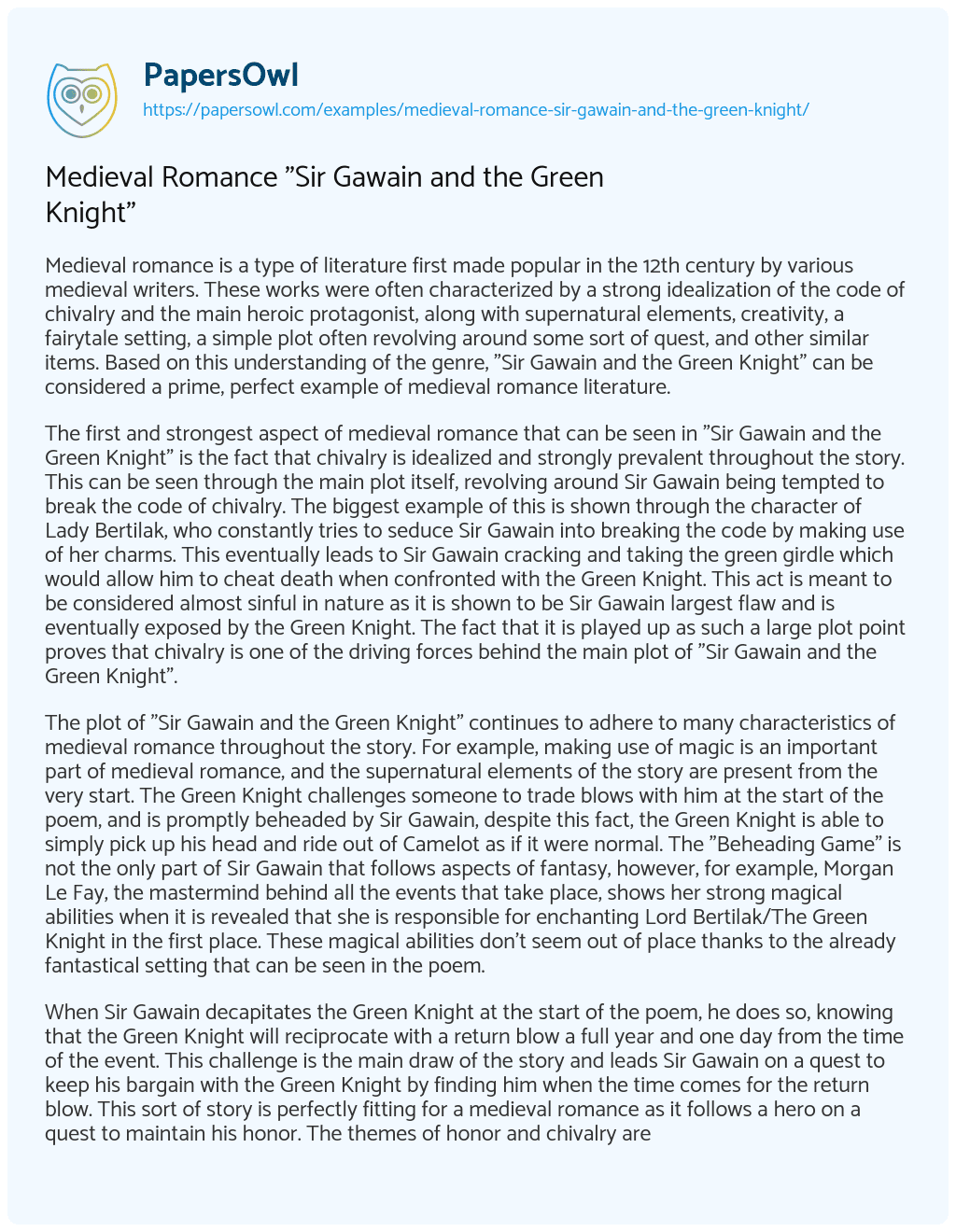 Medieval romance is a type of literature first made popular in the 12th century by various medieval writers. These works were often characterized by a strong idealization of the code of chivalry and the main heroic protagonist, along with supernatural elements, creativity, a fairytale setting, a simple plot often revolving around some sort of quest, and other similar items. Based on this understanding of the genre, “Sir Gawain and the Green Knight” can be considered a prime, perfect example of medieval romance literature.

The first and strongest aspect of medieval romance that can be seen in “Sir Gawain and the Green Knight” is the fact that chivalry is idealized and strongly prevalent throughout the story. This can be seen through the main plot itself, revolving around Sir Gawain being tempted to break the code of chivalry. The biggest example of this is shown through the character of Lady Bertilak, who constantly tries to seduce Sir Gawain into breaking the code by making use of her charms. This eventually leads to Sir Gawain cracking and taking the green girdle which would allow him to cheat death when confronted with the Green Knight. This act is meant to be considered almost sinful in nature as it is shown to be Sir Gawain largest flaw and is eventually exposed by the Green Knight. The fact that it is played up as such a large plot point proves that chivalry is one of the driving forces behind the main plot of “Sir Gawain and the Green Knight”.

The plot of “Sir Gawain and the Green Knight” continues to adhere to many characteristics of medieval romance throughout the story. For example, making use of magic is an important part of medieval romance, and the supernatural elements of the story are present from the very start. The Green Knight challenges someone to trade blows with him at the start of the poem, and is promptly beheaded by Sir Gawain, despite this fact, the Green Knight is able to simply pick up his head and ride out of Camelot as if it were normal. The “Beheading Game” is not the only part of Sir Gawain that follows aspects of fantasy, however, for example, Morgan Le Fay, the mastermind behind all the events that take place, shows her strong magical abilities when it is revealed that she is responsible for enchanting Lord Bertilak/The Green Knight in the first place. These magical abilities don’t seem out of place thanks to the already fantastical setting that can be seen in the poem.

There are other aspects of the story that could be used to prove that “Sir Gawain and the Green Knight” is a medieval romance, but I believe that these are the most important characteristics of medieval romance, and they are well fulfilled by the poem. The focus on the code of chivalry, the supernatural elements, and the nature of the quest in the story all come together to create a memorable piece of literature that has often been used as a shining example of medieval romance.

The Color Symbolism in Sir Gawain and the Green Knight

The Heroic Journey of Sir Gawain and the Green Knight