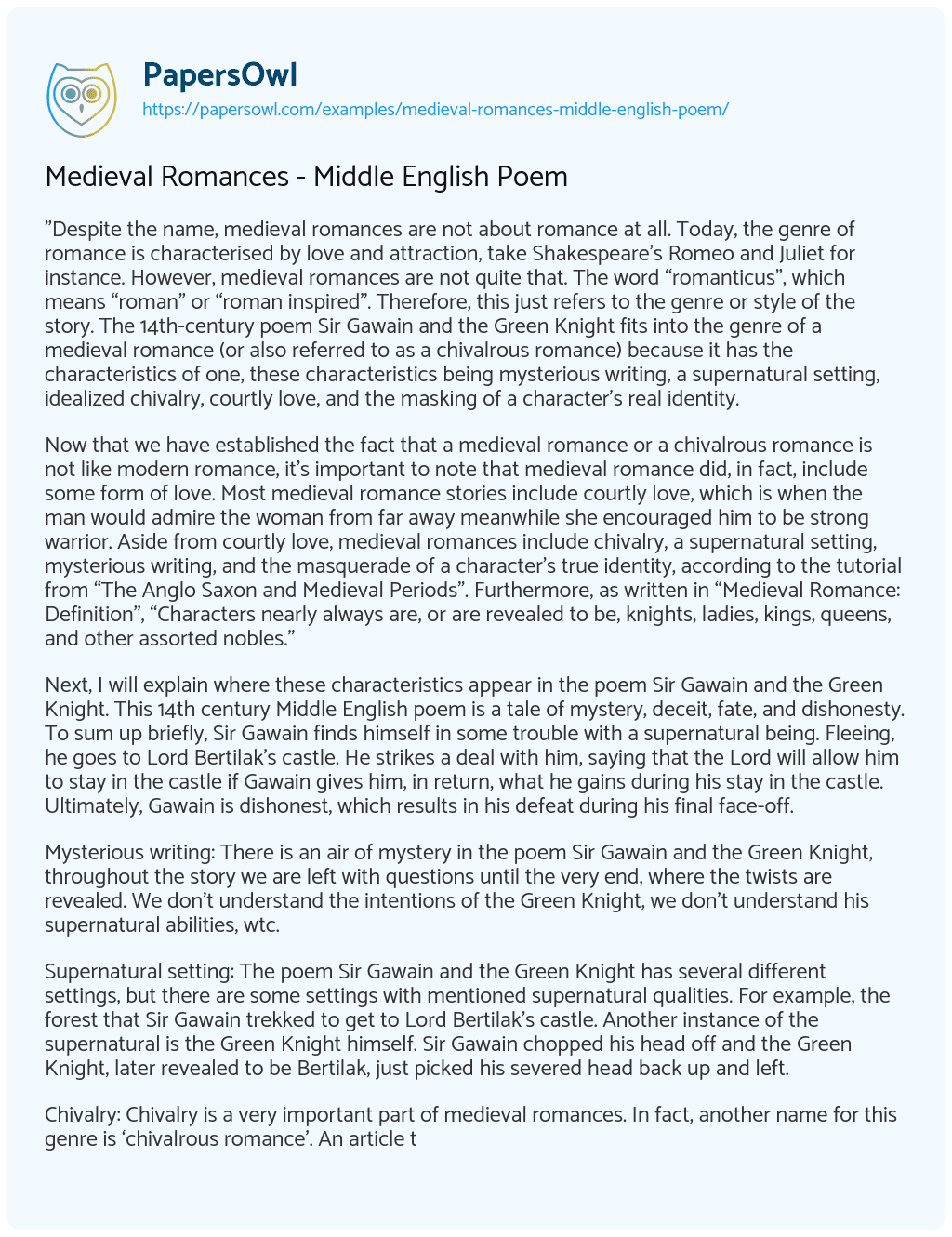 “Despite the name, medieval romances are not about romance at all. Today, the genre of romance is characterised by love and attraction, take Shakespeare’s Romeo and Juliet for instance. However, medieval romances are not quite that. The word “romanticus”, which means “roman” or “roman inspired”. Therefore, this just refers to the genre or style of the story. The 14th-century poem Sir Gawain and the Green Knight fits into the genre of a medieval romance (or also referred to as a chivalrous romance) because it has the characteristics of one, these characteristics being mysterious writing, a supernatural setting, idealized chivalry, courtly love, and the masking of a character’s real identity.

Now that we have established the fact that a medieval romance or a chivalrous romance is not like modern romance, it’s important to note that medieval romance did, in fact, include some form of love. Most medieval romance stories include courtly love, which is when the man would admire the woman from far away meanwhile she encouraged him to be strong warrior. Aside from courtly love, medieval romances include chivalry, a supernatural setting, mysterious writing, and the masquerade of a character’s true identity, according to the tutorial from “The Anglo Saxon and Medieval Periods”. Furthermore, as written in “Medieval Romance: Definition”, “Characters nearly always are, or are revealed to be, knights, ladies, kings, queens, and other assorted nobles.”

Next, I will explain where these characteristics appear in the poem Sir Gawain and the Green Knight. This 14th century Middle English poem is a tale of mystery, deceit, fate, and dishonesty. To sum up briefly, Sir Gawain finds himself in some trouble with a supernatural being. Fleeing, he goes to Lord Bertilak’s castle. He strikes a deal with him, saying that the Lord will allow him to stay in the castle if Gawain gives him, in return, what he gains during his stay in the castle. Ultimately, Gawain is dishonest, which results in his defeat during his final face-off.

Chivalry: Chivalry is a very important part of medieval romances. In fact, another name for this genre is ‘chivalrous romance’. An article titled “Chivalry” in a wikipedia article mentions that chivalry was a code that knights lived by, saying, “The code of chivalry, as it stood by the Late Middle Ages, was a moral system which combined a warrior ethos, knightly piety, and courtly manners, all combining to establish a notion of honour and nobility.” This “code” of chivalry is a running theme in Sir Gawain and the Green Knight. An example of this is the beginning of the poem, when King Arthur is mocked for not being brave enough to take on the challenge. Sir Gawain steps in so King Arthur doesn’t have to, exemplifying nobility, bravery, and generosity.

Courtly love: Courtly love in medieval romances is usually between a knight and a woman whom he admires from a far. In most literature, they are kept apart, whether that be by a quest the knight goes on, the lady’s husband, etc. In this poem, the forbidden intimacy between Sir Gawain and Lady Bertilak exemplifies an aspect of this. In the poem, Lady Bertilak goes behind her husbands back and attempts to seduce Sir Gawain. At first he refuses, but toward the end of his stay, he takes something from her that he could use for his own benefit. This leads to his dishonesty to Lord Bertilak, who already knows what is going on.

Masking a character’s identity: The final quality of a medieval romance that is portrayed in this poem is the masquerade of a character’s identity. In the story, it is revealed that Lord Bertilak was The Green Knight all along. Not only this, but the old woman at the castle is revealed to be a powerful sorceress and King Arthur’s half sister, not the feeble ugly old woman she masqueraded as. In conclusion, the poem Sir Gawain and the Green Knight is a medieval romance because it upholds the standards and has the qualities to fit in that genre.”

The Roles of Women in Middle English Literature

The Five Knightly Virtues of Gawain