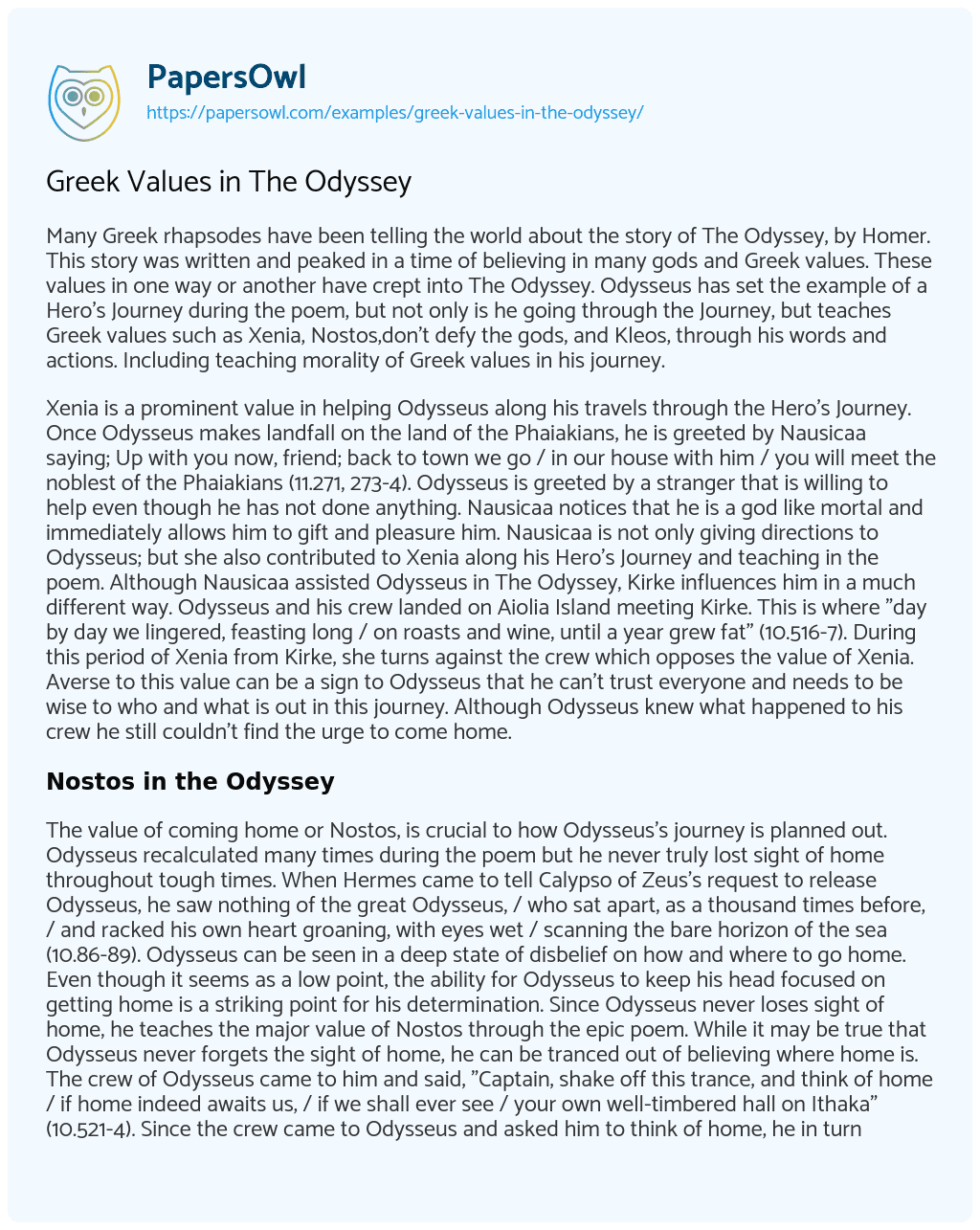 Many Greek rhapsodes have been telling the world about the story of The Odyssey, by Homer. This story was written and peaked in a time of believing in many gods and Greek values. These values in one way or another have crept into The Odyssey. Odysseus has set the example of a Hero’s Journey during the poem, but not only is he going through the Journey, but teaches Greek values such as Xenia, Nostos,don’t defy the gods, and Kleos, through his words and actions. Including teaching morality of Greek values in his journey.

Xenia is a prominent value in helping Odysseus along his travels through the Hero’s Journey. Once Odysseus makes landfall on the land of the Phaiakians, he is greeted by Nausicaa saying; Up with you now, friend; back to town we go / in our house with him / you will meet the noblest of the Phaiakians (11.271, 273-4). Odysseus is greeted by a stranger that is willing to help even though he has not done anything. Nausicaa notices that he is a god like mortal and immediately allows him to gift and pleasure him. Nausicaa is not only giving directions to Odysseus; but she also contributed to Xenia along his Hero’s Journey and teaching in the poem. Although Nausicaa assisted Odysseus in The Odyssey, Kirke influences him in a much different way. Odysseus and his crew landed on Aiolia Island meeting Kirke. This is where “day by day we lingered, feasting long / on roasts and wine, until a year grew fat” (10.516-7). During this period of Xenia from Kirke, she turns against the crew which opposes the value of Xenia. Averse to this value can be a sign to Odysseus that he can’t trust everyone and needs to be wise to who and what is out in this journey. Although Odysseus knew what happened to his crew he still couldn’t find the urge to come home.

Nostos in the Odyssey

The value of coming home or Nostos, is crucial to how Odysseus’s journey is planned out. Odysseus recalculated many times during the poem but he never truly lost sight of home throughout tough times. When Hermes came to tell Calypso of Zeus’s request to release Odysseus, he saw nothing of the great Odysseus, / who sat apart, as a thousand times before, / and racked his own heart groaning, with eyes wet / scanning the bare horizon of the sea (10.86-89). Odysseus can be seen in a deep state of disbelief on how and where to go home. Even though it seems as a low point, the ability for Odysseus to keep his head focused on getting home is a striking point for his determination. Since Odysseus never loses sight of home, he teaches the major value of Nostos through the epic poem. While it may be true that Odysseus never forgets the sight of home, he can be tranced out of believing where home is. The crew of Odysseus came to him and said, “Captain, shake off this trance, and think of home / if home indeed awaits us, / if we shall ever see / your own well-timbered hall on Ithaka” (10.521-4). Since the crew came to Odysseus and asked him to think of home, he in turn has taught them the Greek value of Nostos. Even though the crew was disrespectful of their captain at first, they were able to be taught a major Greek value. It should be noted that Odysseus single handedly was able to teach to his crew that they need to keep their morals straight, not just with Xenia and Nostos, but to never test the gods.

The gods have the ability to do what anything they can desire with the power of just being a god. Odysseus was prophesied by Tierias, you’ll find the grazing herds of Helios … if you raid the beeves, I see destruction / for ship and crew. (11.122, 126-7). Even though Odysseus was told this, his crew still went ahead with eating the livestock and paid the price. The power between a god and a mortal is a massive difference and his crew should have been taught to respect them. Since only Odysseus was told this, and not the crew, it can be seen as if Odysseus has special benefits or advantages over regular’ mortals. For the power Odysseus has over mortals, it may be seen to that he is a god, but not even Odysseus can fend off the gods’ influence. When Odysseus is talking to Alkinoss telling him that, “I am like those men / who suffer the worst trials that you know, / and miseries greater yet, as I might tell you / hundreds; indeed the gods could send no more” (7.226-9). Odysseus has seen what the gods are able to create and knows that they will be unbeatable forever if you don’t obey their commands. He has seen what they can do and he is trying to tell/teach Alkinoss this value. Odysseus is trying to help out Alkinoss so he will never be delayed by the gods. Seeing the power of the gods from Odysseus’s perspective makes him almost want to be one just through his actions and speech.

The reputation Odysseus strives for throughout his journey, is the main factors and influence of his actions. This value of reputation is called Kleos, or being glorified. When Odysseus is, “In the hushed hall it smote the suitors / and all their faces changed … / Odysseus laughed within him” (21.470-1, 473). When the master tactician reveals himself, the suitors already have an idea of what power he has. Odysseus laughing at himself in this scene symbolises how powerful and gloryful he thinks he is as a mortal. The symbol of being more powerful than another human can be very intimidating to rivals. Odysseus is trying to show this symbol and Greek value to Telemakus to show that he needs to own up to his dad’s work and learn how these values affect his life. Odysseus not only proves his reputation to his son and the suitors, he also proves it to Zeus. When Zeus and Athena are talking, Zeus says, Could I forget that kingly man, Odysseus? / There is no mortal half so wise; no mortal / gave so much to the lords of open sky (1.87-9). Odysseus setting a powerful example of Kleos to not only the mortals but to the gods is so big it is spread throughout the world. As long as these Greek values transfer through the world, we can see Odysseus has taught the world some of these Greek values through Hero’s Journey.

Through the epic poem, Odysseus proves he is able to teach Xenia, Nostos, not despising the gods, and Kleos through his actions and speech. Odysseus is able to relate these Greek values into his journey by trying to come to a common ground with his listeners. He makes it a point to his followers and enemies that he always wants to be set with his Greek values. Never shall he stray even though some of these values can be interpreted as outrageous in today’s society, they are the building blocks for this world.

Greek Values in The Odyssey. (2019, May 20). Retrieved from https://papersowl.com/examples/greek-values-in-the-odyssey/

Homeric Values Within the Odyssey