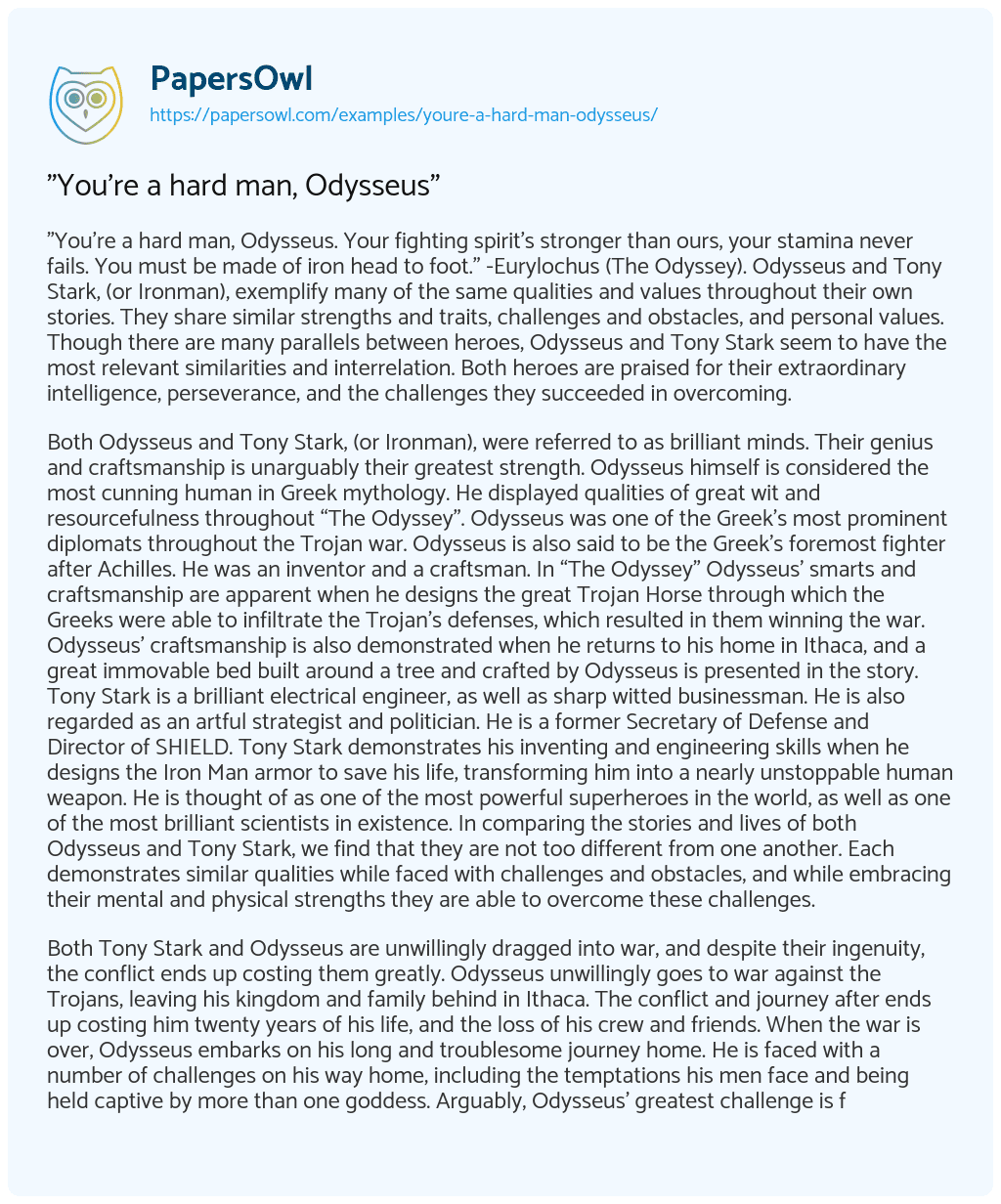 “You’re a hard man, Odysseus. Your fighting spirit’s stronger than ours, your stamina never fails. You must be made of iron head to foot.” -Eurylochus (The Odyssey). Odysseus and Tony Stark, (or Ironman), exemplify many of the same qualities and values throughout their own stories. They share similar strengths and traits, challenges and obstacles, and personal values. Though there are many parallels between heroes, Odysseus and Tony Stark seem to have the most relevant similarities and interrelation. Both heroes are praised for their extraordinary intelligence, perseverance, and the challenges they succeeded in overcoming.

Both Odysseus and Tony Stark, (or Ironman), were referred to as brilliant minds. Their genius and craftsmanship is unarguably their greatest strength. Odysseus himself is considered the most cunning human in Greek mythology. He displayed qualities of great wit and resourcefulness throughout “The Odyssey”. Odysseus was one of the Greek’s most prominent diplomats throughout the Trojan war. Odysseus is also said to be the Greek’s foremost fighter after Achilles. He was an inventor and a craftsman. In “The Odyssey” Odysseus’ smarts and craftsmanship are apparent when he designs the great Trojan Horse through which the Greeks were able to infiltrate the Trojan’s defenses, which resulted in them winning the war. Odysseus’ craftsmanship is also demonstrated when he returns to his home in Ithaca, and a great immovable bed built around a tree and crafted by Odysseus is presented in the story. Tony Stark is a brilliant electrical engineer, as well as sharp witted businessman. He is also regarded as an artful strategist and politician. He is a former Secretary of Defense and Director of SHIELD. Tony Stark demonstrates his inventing and engineering skills when he designs the Iron Man armor to save his life, transforming him into a nearly unstoppable human weapon. He is thought of as one of the most powerful superheroes in the world, as well as one of the most brilliant scientists in existence. In comparing the stories and lives of both Odysseus and Tony Stark, we find that they are not too different from one another. Each demonstrates similar qualities while faced with challenges and obstacles, and while embracing their mental and physical strengths they are able to overcome these challenges.

Both Tony Stark and Odysseus are unwillingly dragged into war, and despite their ingenuity, the conflict ends up costing them greatly. Odysseus unwillingly goes to war against the Trojans, leaving his kingdom and family behind in Ithaca. The conflict and journey after ends up costing him twenty years of his life, and the loss of his crew and friends. When the war is over, Odysseus embarks on his long and troublesome journey home. He is faced with a number of challenges on his way home, including the temptations his men face and being held captive by more than one goddess. Arguably, Odysseus’ greatest challenge is faced when he finally does arrive back home in Ithaca. He returns to find his kingdom overrun with disrespectful Suitors who refuse to leave until Penelope chooses one of them to marry. Odysseus, being cunning and a quick thinker, chooses not to reveal himself immediately. He instead disguises himself as a beggar in an effort to find out who has been loyal to the long lost king of Ithaca. Meanwhile, Penelope retrieves Odysseus’s bow and announces that she will marry the suitor who can string the bow and then shoot an arrow through a line of twelve axes, which is a task only Odysseus could achieve. While this is announced Odysseus follows Eumaeus and Philoetius outside, revealing his identity and promising the men a reward if they fight by his side against the suitors. When Odysseus returns, still in disguise, he is presented with the bow and of course, effortlessly strings it and sends an arrow sailing through all 12 axes. The suitors are shocked, and the next thing they know Odysseus has shot a second arrow through the throat of Antinous. When Odysseus reveals himself, the suitors are terrified. The gates are locked, and the suitors’ weapons have been hidden. Their only fate is to die as defenseless lambs at the feet of the returned Odysseus. This plan involved great thinking and patience. Tony Stark’s endures similar challenges to those of Odysseus. Though perhaps the greatest challenge Tony Stark faces is his kidnapping. He is unwillingly dragged into war and ends up falling victim to an enemy trap and suffering a severe chest injury during said kidnapping. When his captors attempt to force him to build a weapon of mass destruction, he puts his great intelligence and craftsmanship to use and instead creates a powerful suit of armor to save his life and escape captivity. Later he develops his suit, adding weapons and other technological devices he has designed through his own company, Stark Industries. He uses the suit to protect the world as Iron Man. Not only does Tony Stark use his intelligence and cunning to save his own life, but he also becomes a hero who will go on to save countless lives. Both Odysseus and Tony Stark are faced with many challenges and obstacles, of which they use their genius and artistry to overcome in the end. Throughout the many journeys these two embark on, there are many lessons learned.

One important value exemplified by Odysseus throughout “The Odyssey” is perseverance. Despite the countless challenges and obstacles he is faced with, Odysseus never gives up on his quest to return home to Ithaca. He endures many trials while trying to return home from the Trojan War. On his voyage home, he visits the Land of the Dead, evades the Sirens, Scylla and Charybdis and when he does arrive home, he has to pull together a plan to dismiss the suitors and reunite with his wife, Penelope. All of these examples prove that Odysseus exhibits extreme determination and perseverance. He uses both his mental and physical strength to outwit the many beings who attempt to ensnare him. From the very beginning of the poem, Odysseus is painted with great determination to return to his home and family in Ithaca. Tony Stark also proves to value perseverance to a great extent. Tony never backs down from a challenge, no matter how dangerous or demanding. Rather than simply giving up after he is kidnapped and being held captive, he builds a flying suit of armor using only scraps found in a cave. When on the verge of death, he synthesizes a new element that will save his life. Instead of backing down from a fight, he engages in a head-to-head battle with a super soldier, his only weapon being a gauntlet. Both Odysseus and Tony Stark are incredibly determined and persevering. Between the two there is never a challenge backed down from or a battle fled from. These two heroes exemplify the meaning of perseverance.

Odysseus and Tony Stark, (or Ironman), exemplify many of the same qualities and values throughout their own stories. These two heroes represent many of the same mental and physical strengths, face many similar challenges and obstacles, and both exemplify the same important personal values. Iron man could even be considered to be the Odysseus of the 20th century. Through examining the stories of these two heroes, it can be concluded that these two men are not all too different from one another.

Is Odysseus a Good Leader

A Study on the Heroic Traits of Odysseus