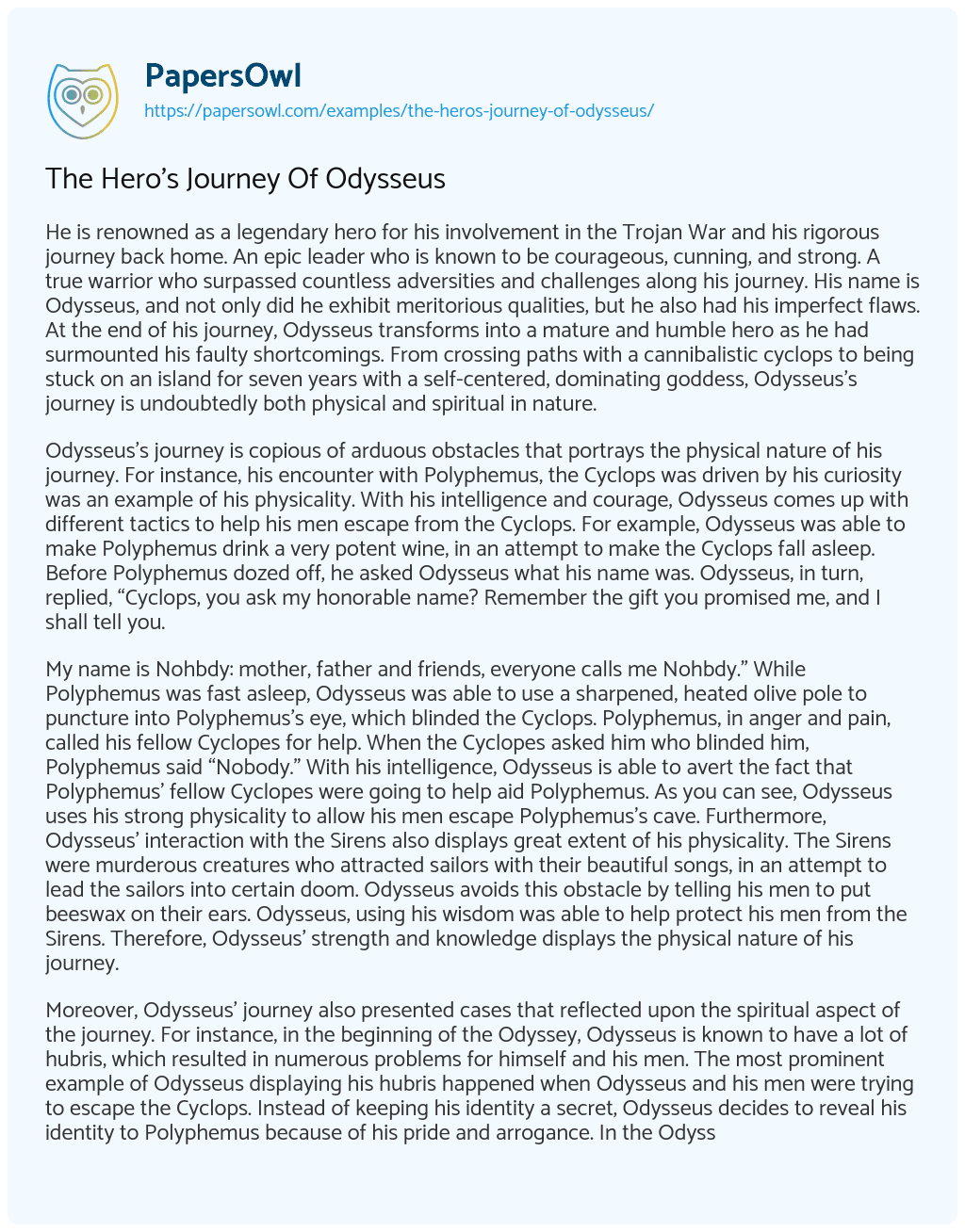 He is renowned as a legendary hero for his involvement in the Trojan War and his rigorous journey back home. An epic leader who is known to be courageous, cunning, and strong. A true warrior who surpassed countless adversities and challenges along his journey. His name is Odysseus, and not only did he exhibit meritorious qualities, but he also had his imperfect flaws. At the end of his journey, Odysseus transforms into a mature and humble hero as he had surmounted his faulty shortcomings. From crossing paths with a cannibalistic cyclops to being stuck on an island for seven years with a self-centered, dominating goddess, Odysseus’s journey is undoubtedly both physical and spiritual in nature.

Odysseus’s journey is copious of arduous obstacles that portrays the physical nature of his journey. For instance, his encounter with Polyphemus, the Cyclops was driven by his curiosity was an example of his physicality. With his intelligence and courage, Odysseus comes up with different tactics to help his men escape from the Cyclops. For example, Odysseus was able to make Polyphemus drink a very potent wine, in an attempt to make the Cyclops fall asleep. Before Polyphemus dozed off, he asked Odysseus what his name was. Odysseus, in turn, replied, “Cyclops, you ask my honorable name? Remember the gift you promised me, and I shall tell you.

My name is Nohbdy: mother, father and friends, everyone calls me Nohbdy.” While Polyphemus was fast asleep, Odysseus was able to use a sharpened, heated olive pole to puncture into Polyphemus’s eye, which blinded the Cyclops. Polyphemus, in anger and pain, called his fellow Cyclopes for help. When the Cyclopes asked him who blinded him, Polyphemus said “Nobody.” With his intelligence, Odysseus is able to avert the fact that Polyphemus’ fellow Cyclopes were going to help aid Polyphemus. As you can see, Odysseus uses his strong physicality to allow his men escape Polyphemus’s cave. Furthermore, Odysseus’ interaction with the Sirens also displays great extent of his physicality. The Sirens were murderous creatures who attracted sailors with their beautiful songs, in an attempt to lead the sailors into certain doom. Odysseus avoids this obstacle by telling his men to put beeswax on their ears. Odysseus, using his wisdom was able to help protect his men from the Sirens. Therefore, Odysseus’ strength and knowledge displays the physical nature of his journey.

Moreover, Odysseus’ journey also presented cases that reflected upon the spiritual aspect of the journey. For instance, in the beginning of the Odyssey, Odysseus is known to have a lot of hubris, which resulted in numerous problems for himself and his men. The most prominent example of Odysseus displaying his hubris happened when Odysseus and his men were trying to escape the Cyclops. Instead of keeping his identity a secret, Odysseus decides to reveal his identity to Polyphemus because of his pride and arrogance. In the Odyssey it states, “ Cyclops, if ever mortal man inquire how you were put to shame and blinded, tell him Odysseus, raider of cities, took your eye: Laertes’ son, whose home’s on Ithaca.” Polyphemus, irritated by Odysseus prays to his father, Poseidon to punish Odysseus, who delayed Odysseus’ journey back and at the expense of all of his men’s lives. Odysseus learns from this mistake and makes sure that everything he does would benefit his men the most. An example of this is when Odysseus had to choose between Scylla and Charybdis. Scylla is a six-headed monster who will consume the head of one sailor. Charybdis is a whirlpool who will consume an entire ship, leading to the deaths of everyone of his ship. Odysseus chooses to go towards Scylla because only six men would die instead of everyone.

Along his journey, Odysseus had learned many valuable lessons. At the start of his journey, Odysseus was very arrogant and he believes that he doesn’t need assistance from the gods. When Odysseus struggles to get back home, he finally realizes that he can’t do everything by himself and acknowledges the fact that he should ask the gods for help. This illustrates his journey as one that attains spirituality because Odysseus went from a pretentious man to a humble, open-minded man. Homer’s message of the Odyssey is reflected upon our own lives. Everyone face challenges and struggles throughout their lifetime. However, it takes perseverance and determination to overcome these obstacles and finish your journey.

All in all, Odysseus’ journey is a heroic journey both physical and spiritually in nature. He has faced many barriers, for instance, his encounters with Polyphemus and the Sirens. However, through his determination, knowledge, perseverance and courage, Odysseus was able to finally go back to Ithaca. He gained very important knowledge and transitioned from a very hubristic man to a mature and knowledgeable hero.

The Hero's Journey Of Odysseus. (2021, Jul 05). Retrieved from https://papersowl.com/examples/the-heros-journey-of-odysseus/