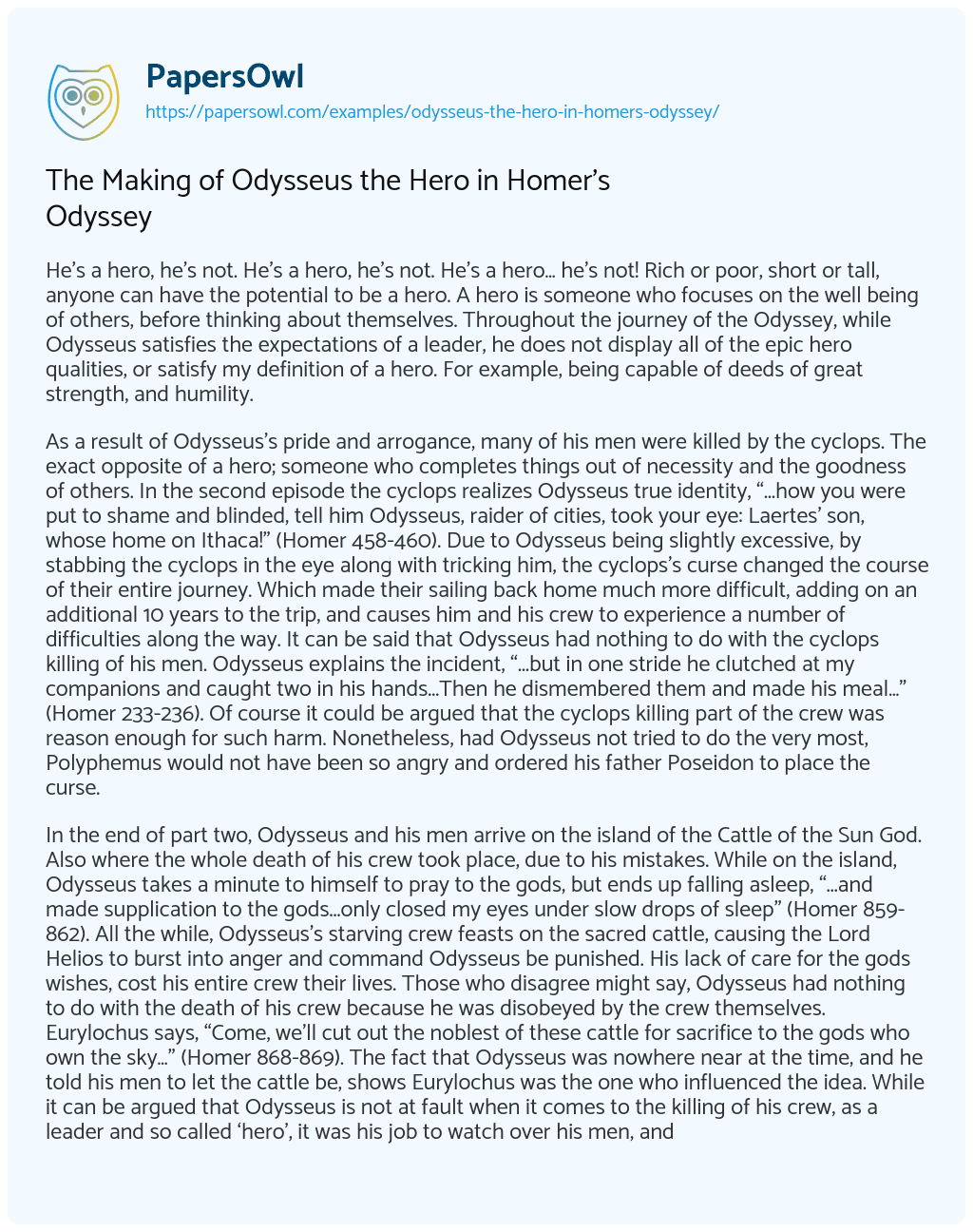 As a result of Odysseus’s pride and arrogance, many of his men were killed by the cyclops. The exact opposite of a hero; someone who completes things out of necessity and the goodness of others. In the second episode the cyclops realizes Odysseus true identity, “…how you were put to shame and blinded, tell him Odysseus, raider of cities, took your eye: Laertes’ son, whose home on Ithaca!” (Homer 458-460). Due to Odysseus being slightly excessive, by stabbing the cyclops in the eye along with tricking him, the cyclops’s curse changed the course of their entire journey. Which made their sailing back home much more difficult, adding on an additional 10 years to the trip, and causes him and his crew to experience a number of difficulties along the way. It can be said that Odysseus had nothing to do with the cyclops killing of his men. Odysseus explains the incident, “…but in one stride he clutched at my companions and caught two in his hands…Then he dismembered them and made his meal…” (Homer 233-236). Of course it could be argued that the cyclops killing part of the crew was reason enough for such harm. Nonetheless, had Odysseus not tried to do the very most, Polyphemus would not have been so angry and ordered his father Poseidon to place the curse.

In the end of part two, Odysseus and his men arrive on the island of the Cattle of the Sun God. Also where the whole death of his crew took place, due to his mistakes. While on the island, Odysseus takes a minute to himself to pray to the gods, but ends up falling asleep, “…and made supplication to the gods…only closed my eyes under slow drops of sleep” (Homer 859-862). All the while, Odysseus’s starving crew feasts on the sacred cattle, causing the Lord Helios to burst into anger and command Odysseus be punished. His lack of care for the gods wishes, cost his entire crew their lives. Those who disagree might say, Odysseus had nothing to do with the death of his crew because he was disobeyed by the crew themselves. Eurylochus says, “Come, we’ll cut out the noblest of these cattle for sacrifice to the gods who own the sky…” (Homer 868-869). The fact that Odysseus was nowhere near at the time, and he told his men to let the cattle be, shows Eurylochus was the one who influenced the idea. While it can be argued that Odysseus is not at fault when it comes to the killing of his crew, as a leader and so called ‘hero’, it was his job to watch over his men, and encourage them on the rest of their journey.

While the Odyssey shows the story of a great journey, it does not tell the story of an epic hero. Being a hero has nothing to do with where you come from, or the amount of physical strength had. Just like heroes in movies nowadays or even in everyday life, their heroic status is based off of things that actually matter, and make an impact. Whether it be deeds from the goodness of their heart, or their dedication and commitment to their community.

The Making of Odysseus the Hero in Homer's Odyssey. (2021, Jul 05). Retrieved from https://papersowl.com/examples/odysseus-the-hero-in-homers-odyssey/

“Great War Hero” in the Odyssey by Homer