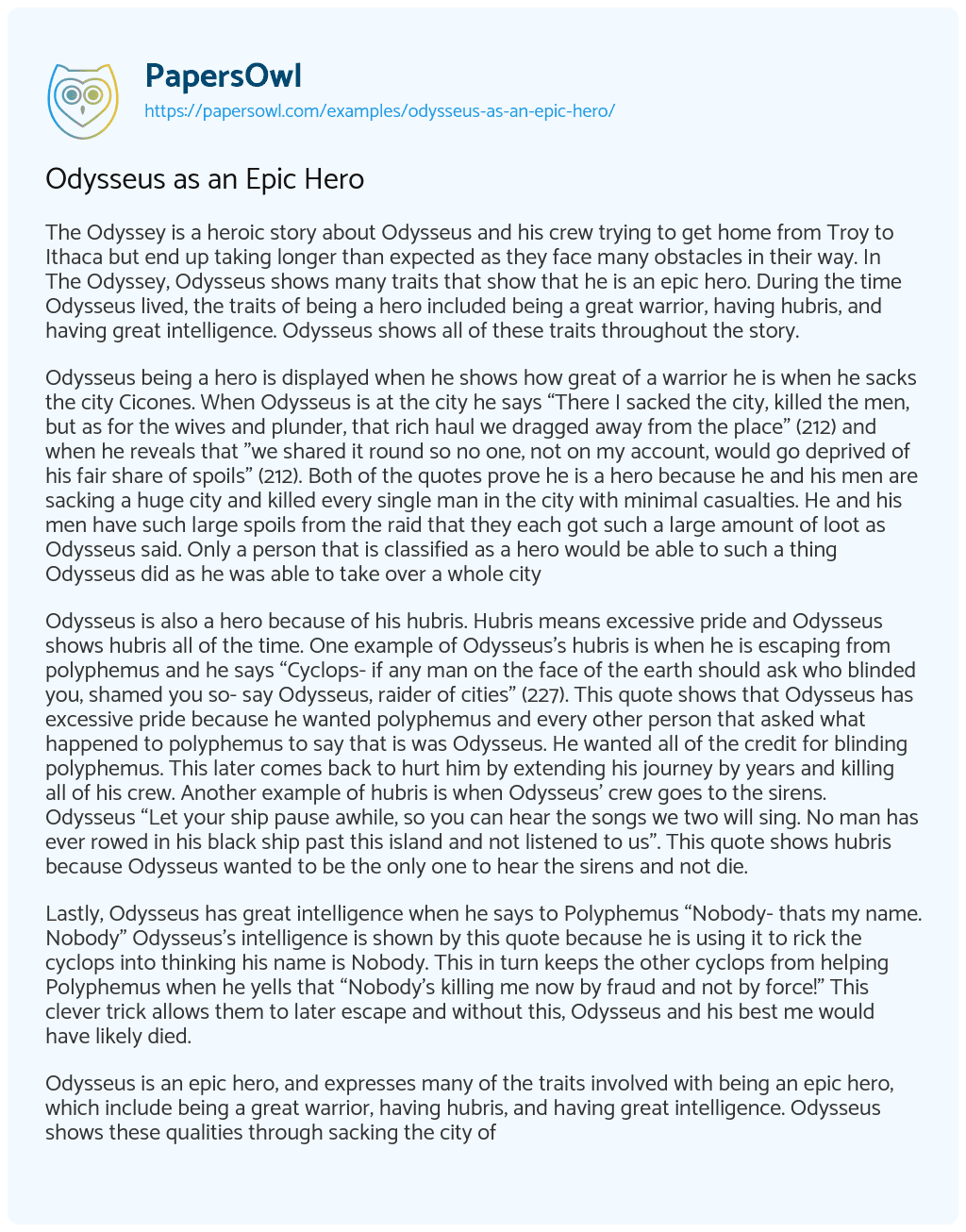 The Odyssey is a heroic story about Odysseus and his crew trying to get home from Troy to Ithaca but end up taking longer than expected as they face many obstacles in their way. In The Odyssey, Odysseus shows many traits that show that he is an epic hero. During the time Odysseus lived, the traits of being a hero included being a great warrior, having hubris, and having great intelligence. Odysseus shows all of these traits throughout the story.

Odysseus being a hero is displayed when he shows how great of a warrior he is when he sacks the city Cicones. When Odysseus is at the city he says “There I sacked the city, killed the men, but as for the wives and plunder, that rich haul we dragged away from the place” (212) and when he reveals that ”we shared it round so no one, not on my account, would go deprived of his fair share of spoils” (212). Both of the quotes prove he is a hero because he and his men are sacking a huge city and killed every single man in the city with minimal casualties. He and his men have such large spoils from the raid that they each got such a large amount of loot as Odysseus said. Only a person that is classified as a hero would be able to such a thing Odysseus did as he was able to take over a whole city

Odysseus is also a hero because of his hubris. Hubris means excessive pride and Odysseus shows hubris all of the time. One example of Odysseus’s hubris is when he is escaping from polyphemus and he says “Cyclops- if any man on the face of the earth should ask who blinded you, shamed you so- say Odysseus, raider of cities” (227). This quote shows that Odysseus has excessive pride because he wanted polyphemus and every other person that asked what happened to polyphemus to say that is was Odysseus. He wanted all of the credit for blinding polyphemus. This later comes back to hurt him by extending his journey by years and killing all of his crew. Another example of hubris is when Odysseus’ crew goes to the sirens. Odysseus “Let your ship pause awhile, so you can hear the songs we two will sing. No man has ever rowed in his black ship past this island and not listened to us”. This quote shows hubris because Odysseus wanted to be the only one to hear the sirens and not die.

Lastly, Odysseus has great intelligence when he says to Polyphemus “Nobody- thats my name. Nobody” Odysseus’s intelligence is shown by this quote because he is using it to rick the cyclops into thinking his name is Nobody. This in turn keeps the other cyclops from helping Polyphemus when he yells that “Nobody’s killing me now by fraud and not by force!” This clever trick allows them to later escape and without this, Odysseus and his best me would have likely died.

Odysseus is an epic hero, and expresses many of the traits involved with being an epic hero, which include being a great warrior, having hubris, and having great intelligence. Odysseus shows these qualities through sacking the city of the Cicones, telling polyphemus his name, and outsmarting Polyphemus in the cave. All of these qualities, being a great warrior, having god-like qualities, and having great intelligence are all prevalent in being a hero today.

Odysseus as an Epic Hero. (2021, Mar 19). Retrieved from https://papersowl.com/examples/odysseus-as-an-epic-hero/