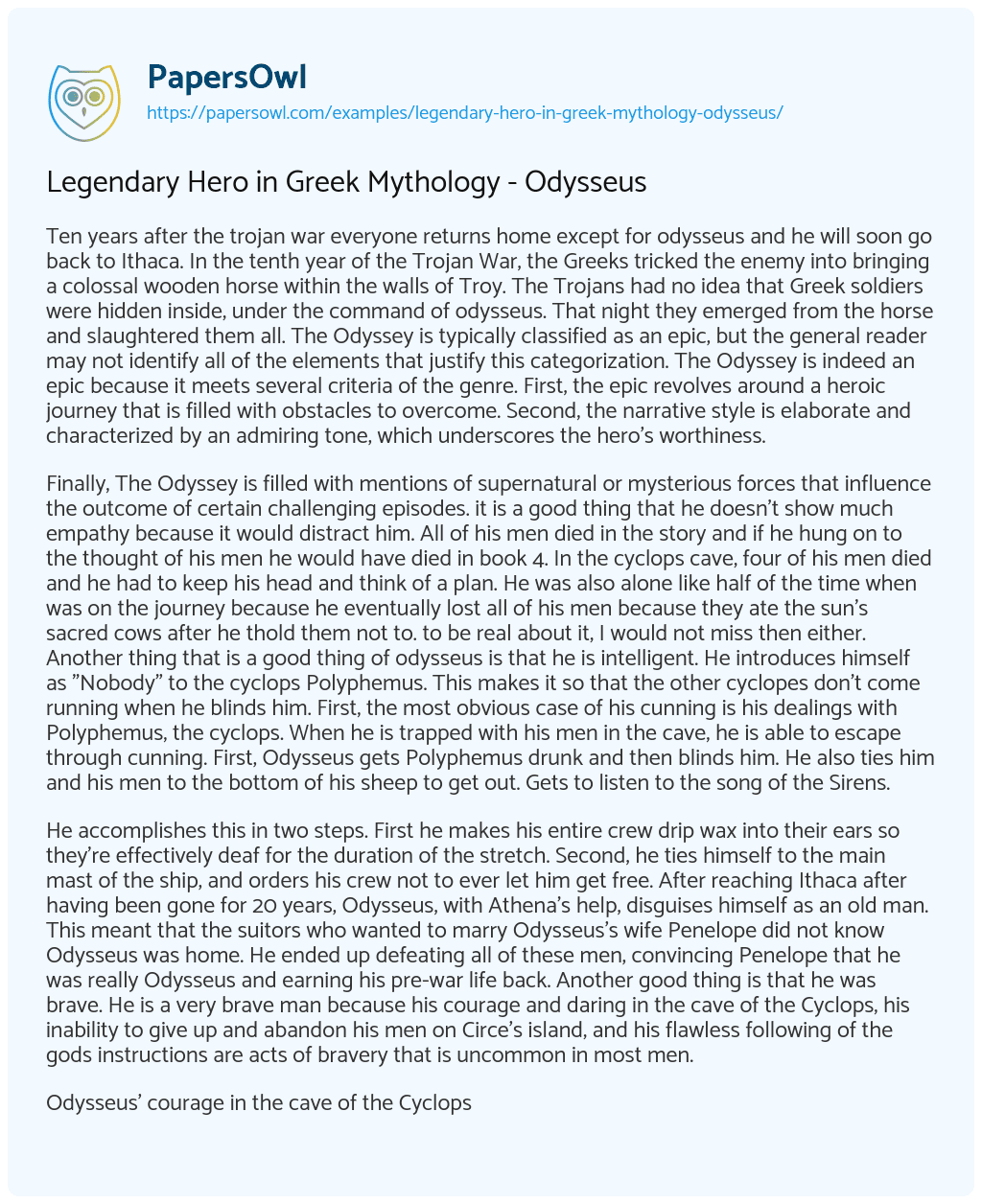 Ten years after the trojan war everyone returns home except for odysseus and he will soon go back to Ithaca. In the tenth year of the Trojan War, the Greeks tricked the enemy into bringing a colossal wooden horse within the walls of Troy. The Trojans had no idea that Greek soldiers were hidden inside, under the command of odysseus. That night they emerged from the horse and slaughtered them all. The Odyssey is typically classified as an epic, but the general reader may not identify all of the elements that justify this categorization. The Odyssey is indeed an epic because it meets several criteria of the genre. First, the epic revolves around a heroic journey that is filled with obstacles to overcome. Second, the narrative style is elaborate and characterized by an admiring tone, which underscores the hero’s worthiness.

Finally, The Odyssey is filled with mentions of supernatural or mysterious forces that influence the outcome of certain challenging episodes. it is a good thing that he doesn’t show much empathy because it would distract him. All of his men died in the story and if he hung on to the thought of his men he would have died in book 4. In the cyclops cave, four of his men died and he had to keep his head and think of a plan. He was also alone like half of the time when was on the journey because he eventually lost all of his men because they ate the sun’s sacred cows after he thold them not to. to be real about it, I would not miss then either. Another thing that is a good thing of odysseus is that he is intelligent. He introduces himself as “Nobody” to the cyclops Polyphemus. This makes it so that the other cyclopes don’t come running when he blinds him. First, the most obvious case of his cunning is his dealings with Polyphemus, the cyclops. When he is trapped with his men in the cave, he is able to escape through cunning. First, Odysseus gets Polyphemus drunk and then blinds him. He also ties him and his men to the bottom of his sheep to get out. Gets to listen to the song of the Sirens.

He accomplishes this in two steps. First he makes his entire crew drip wax into their ears so they’re effectively deaf for the duration of the stretch. Second, he ties himself to the main mast of the ship, and orders his crew not to ever let him get free. After reaching Ithaca after having been gone for 20 years, Odysseus, with Athena’s help, disguises himself as an old man. This meant that the suitors who wanted to marry Odysseus’s wife Penelope did not know Odysseus was home. He ended up defeating all of these men, convincing Penelope that he was really Odysseus and earning his pre-war life back. Another good thing is that he was brave. He is a very brave man because his courage and daring in the cave of the Cyclops, his inability to give up and abandon his men on Circe’s island, and his flawless following of the gods instructions are acts of bravery that is uncommon in most men.

Odysseus’ courage in the cave of the Cyclops Polyphemus banishes his crew’s trepidation and eventually gets them out of there. When Polyphemus returns to the cave after capturing them, Odysseus takes the risk to get the Cyclops’ attention so he can manipulate the one-eyed giant into drinking the potent wine. Odysseus’ bravery is catching and he inspires those with him. Once Polyphemus has passed out, Odysseus and a few other men stab the giant’s eye. This quote of Odysseus inspiring his men in the Cyclops’ cave shows how Odysseus bravery never abandons him even in a situation where it seems he cannot win.