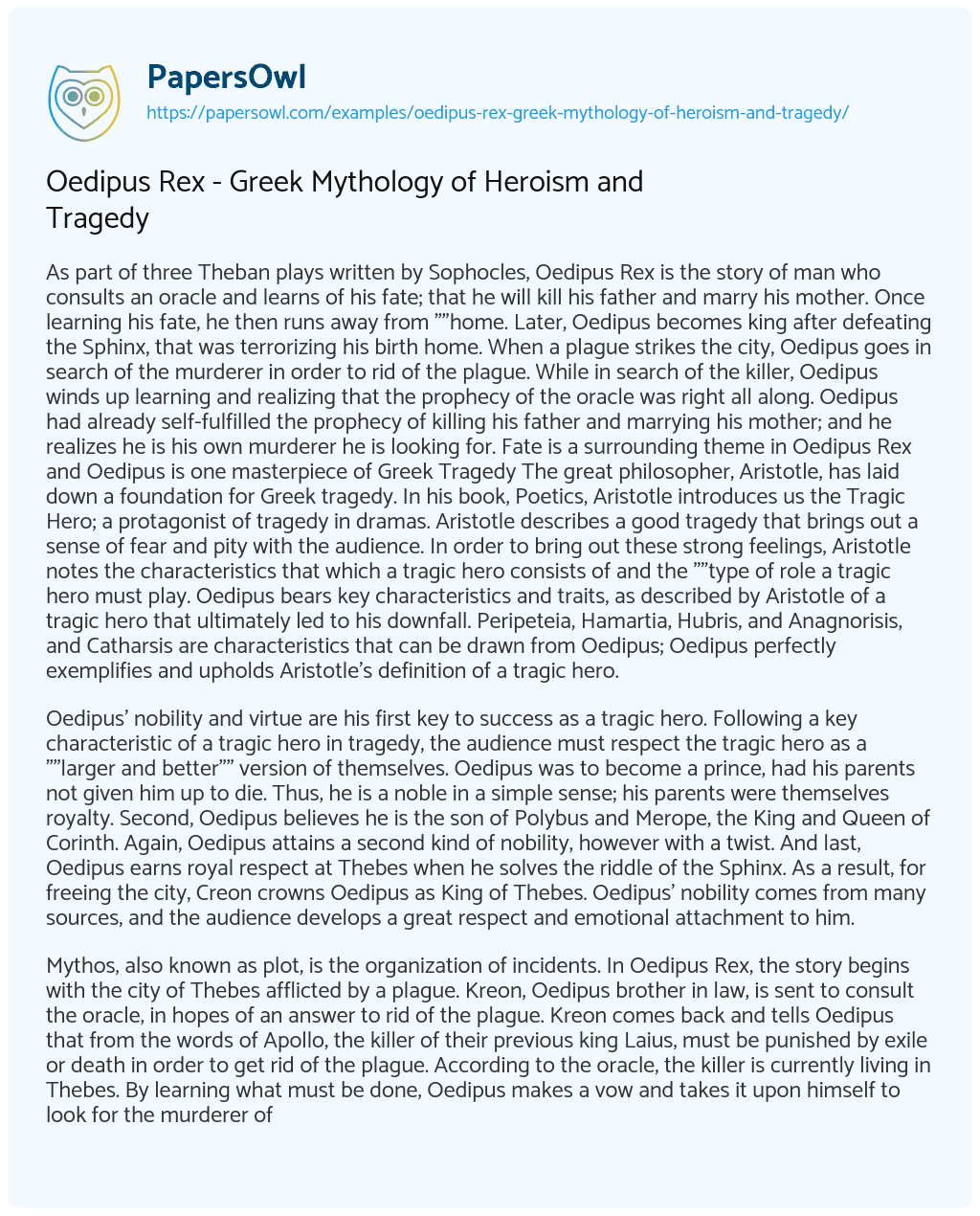 As part of three Theban plays written by Sophocles, Oedipus Rex is the story of man who consults an oracle and learns of his fate; that he will kill his father and marry his mother. Once learning his fate, he then runs away from “”home. Later, Oedipus becomes king after defeating the Sphinx, that was terrorizing his birth home. When a plague strikes the city, Oedipus goes in search of the murderer in order to rid of the plague. While in search of the killer, Oedipus winds up learning and realizing that the prophecy of the oracle was right all along. Oedipus had already self-fulfilled the prophecy of killing his father and marrying his mother; and he realizes he is his own murderer he is looking for. Fate is a surrounding theme in Oedipus Rex and Oedipus is one masterpiece of Greek Tragedy The great philosopher, Aristotle, has laid down a foundation for Greek tragedy. In his book, Poetics, Aristotle introduces us the Tragic Hero; a protagonist of tragedy in dramas. Aristotle describes a good tragedy that brings out a sense of fear and pity with the audience. In order to bring out these strong feelings, Aristotle notes the characteristics that which a tragic hero consists of and the “”type of role a tragic hero must play. Oedipus bears key characteristics and traits, as described by Aristotle of a tragic hero that ultimately led to his downfall. Peripeteia, Hamartia, Hubris, and Anagnorisis, and Catharsis are characteristics that can be drawn from Oedipus; Oedipus perfectly exemplifies and upholds Aristotle’s definition of a tragic hero.

Oedipus’ nobility and virtue are his first key to success as a tragic hero. Following a key characteristic of a tragic hero in tragedy, the audience must respect the tragic hero as a “”larger and better”” version of themselves. Oedipus was to become a prince, had his parents not given him up to die. Thus, he is a noble in a simple sense; his parents were themselves royalty. Second, Oedipus believes he is the son of Polybus and Merope, the King and Queen of Corinth. Again, Oedipus attains a second kind of nobility, however with a twist. And last, Oedipus earns royal respect at Thebes when he solves the riddle of the Sphinx. As a result, for freeing the city, Creon crowns Oedipus as King of Thebes. Oedipus’ nobility comes from many sources, and the audience develops a great respect and emotional attachment to him.

Mythos, also known as plot, is the organization of incidents. In Oedipus Rex, the story begins with the city of Thebes afflicted by a plague. Kreon, Oedipus brother in law, is sent to consult the oracle, in hopes of an answer to rid of the plague. Kreon comes back and tells Oedipus that from the words of Apollo, the killer of their previous king Laius, must be punished by exile or death in order to get rid of the plague. According to the oracle, the killer is currently living in Thebes. By learning what must be done, Oedipus makes a vow and takes it upon himself to look for the murderer of Laius. Little does Oedipus know, he is the killer he goes in search for. This is the beginning stages of Oedipus’s downfall.

Hamartia, also known as personal error, is a part ofprotagonist’s personality, which ultimately brings about their tragic downfall. Hubris, excessive pride, is an example of Hamartia. While in search for the murderer, Choragos introduces Oedipus to a wise woman named Teiresias; a holy blind prophet. Oedipus quickly asks for her help of how to rid the plague, but Teiresias is reluctant to give Oedipus the answer. Teiresias knows the truth; Oedipus is the killer. After Oedipus demands that Teiresias reveals the truth to him, they go back and forth arguing; until finally she tells Oedipus that he is the murderer. “”Teiresias: I say that you are the murderer whom you seek.1 Disturbed and upset, Oedipus argues with Teiresias, condemning her words as harsh and vile. Oedipus’s pride, Hubris, blinds him from seeing the truth. If we take a look back in the story, Oedipus is no stranger to receiving new from oracles or prophets. He first consults the oracle at Delphi, he learns his fate, which is that he is going to kill his father and marry his mother. Oedipus rejects this prophecy, and vows to never return to Corinth, his believed place of birth. Teiresias affirms Oedipus that he already killed his father and married his mother. It is almost like Oedipus does not want to believe the truth. Teiresias tells Oedipus that he is blind; that he cannot see his own evil and wrongdoings. This meeting between Oedipus and Teiresias is an ironic situation. Oedipus can see with his own eyes, yet is blind to the truth. Teiresias is blind, but can “”see the truth Oedipus cannot see.

Oedipus the King and Aristotle