Oedipus the King and Aristotle 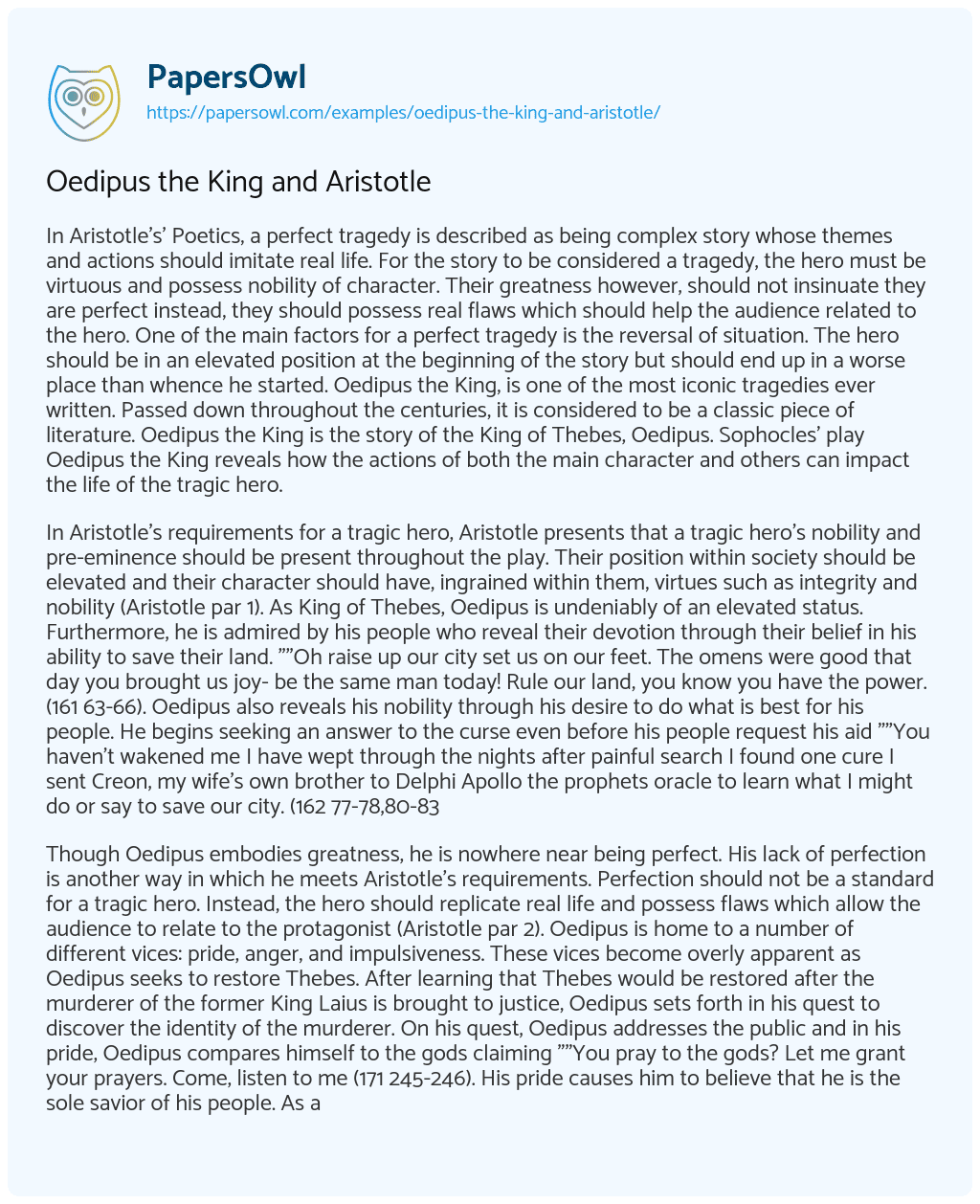 In Aristotle’s’ Poetics, a perfect tragedy is described as being complex story whose themes and actions should imitate real life. For the story to be considered a tragedy, the hero must be virtuous and possess nobility of character. Their greatness however, should not insinuate they are perfect instead, they should possess real flaws which should help the audience related to the hero. One of the main factors for a perfect tragedy is the reversal of situation. The hero should be in an elevated position at the beginning of the story but should end up in a worse place than whence he started. Oedipus the King, is one of the most iconic tragedies ever written. Passed down throughout the centuries, it is considered to be a classic piece of literature. Oedipus the King is the story of the King of Thebes, Oedipus. Sophocles’ play Oedipus the King reveals how the actions of both the main character and others can impact the life of the tragic hero.

In Aristotle’s requirements for a tragic hero, Aristotle presents that a tragic hero’s nobility and pre-eminence should be present throughout the play. Their position within society should be elevated and their character should have, ingrained within them, virtues such as integrity and nobility (Aristotle par 1). As King of Thebes, Oedipus is undeniably of an elevated status. Furthermore, he is admired by his people who reveal their devotion through their belief in his ability to save their land. “”Oh raise up our city set us on our feet. The omens were good that day you brought us joy- be the same man today! Rule our land, you know you have the power. (161 63-66). Oedipus also reveals his nobility through his desire to do what is best for his people. He begins seeking an answer to the curse even before his people request his aid “”You haven’t wakened me I have wept through the nights after painful search I found one cure I sent Creon, my wife’s own brother to Delphi Apollo the prophets oracle to learn what I might do or say to save our city. (162 77-78,80-83

Though Oedipus embodies greatness, he is nowhere near being perfect. His lack of perfection is another way in which he meets Aristotle’s requirements. Perfection should not be a standard for a tragic hero. Instead, the hero should replicate real life and possess flaws which allow the audience to relate to the protagonist (Aristotle par 2). Oedipus is home to a number of different vices: pride, anger, and impulsiveness. These vices become overly apparent as Oedipus seeks to restore Thebes. After learning that Thebes would be restored after the murderer of the former King Laius is brought to justice, Oedipus sets forth in his quest to discover the identity of the murderer. On his quest, Oedipus addresses the public and in his pride, Oedipus compares himself to the gods claiming “”You pray to the gods? Let me grant your prayers. Come, listen to me (171 245-246). His pride causes him to believe that he is the sole savior of his people. As a result, he dismisses the people’s prayers and presents the word of Apollo to the people as if he alone discovered how to remove the plague.

Another area where Oedipus falls short is his quick temper. As Oedipus seeks the murderer of King Laius, he requests that the blind seer Tiresias reveal whether or not he knew who had killed the former king. When Tiresias refuses to reveal what he knows, Oedipus quickly gives in to his anger. “”What? You know and you won’t tell?… I’d rather not cause pain for you or meNothing! You scum of the earth, you’d enrage a heart of stone! (177 376,378, 380-381). When Tiresias finally reveals that it is Oedipus who killed King Laius, he becomes even more irate and begins mocking the seer. “”You’ve lost your power, stone-blind, stone-deaf-senses, eyes as blind as stone! (181 421-422). Connected to both his pride and his quick temper, Oedipus is also extremely impulsive. When Tiresias first refuses to tell Oedipus the truth about the murder of King Laius, Oedipus accuses the Seer of being an accomplice in the murder. He also begins to accuse Creon of plotting to overthrow him. His impulsive behavior is also responsible for beginning his downward spiral. When Oedipus came to the crossroads and was confronted with the kings group of men, he allowed his anger to get the best of him. When one of the men physically assaulted Oedipus, he killed the man and his entire party.

Another area where Aristotle defines what is necessary for a tragic hero is Hamartia. The tragedy which the hero experiences should be partially due to their own actions. Their error in judgement should be the result of a decision or action made of their own violation. Fate should not be the determining factor in a hero’s downfall (Aristotle par 3). Oedipus downfall is brought about by a number of different factors however, they all stem from one original source, prophesy. “”You are fated to couple with your mother, you will bring a breed of children into the light no man can bear to see you will kill your father, the one who gave you life! (205 873-875). This prophesy provides the backbone for all of the events leading to Oedipus downfall. This is the prophesy which caused King Laius and Queen Jocasta to try and attempt infanticide. It is also this same prophesy which led Oedipus to flee his supposed homeland Corinth. Even though the prophesy plays a part in Oedipus downfall, it is his actions and the actions of those around him which truly bring it about. After Tiresias accuses Oedipus of being the murderer of King Laius Oedipus begins to seek to prove his innocence. However, as he digs further into the death of King Laius and questions the sole survivor of King Laius party, Oedipus comes to realize that he had indeed killed the king. He also realizes that the prophesy has come true as it is revealed that he is not the biological son of the King and Queen of Corinth but instead of a child from the House of Laius.

After learning the truth about his marriage and unintentional crimes, Oedipus faces a punishment which far exceeded the weight of his crimes. This falls into accordance with Aristotle’s requirements which state that the hero should not receive a light punishment. Instead, for a tragedy, the hero should face a punishment far more intense than the crime demanded (Aristotle par 4). In the span of one day, Oedipus goes from being King of Thebes to being a blind outcast. After finally seeing the truth about his parentage and marriage, Oedipus returns to the palace where he sees that Jocasta, his wife and mother has committed suicide. Unable to bear the grief, he uses Jocasta’s pins to blind himself. “”he digs them down the sockets of his eyes, crying, “”You, you’ll see no more of the pain I suffered, all the pain I caused! (237 1405-1406). At the end, Oedipus leaves Thebes, as a blind outcast and victim of his own curse.

Even though Oedipus has lost everything: his pride, sight, family, and kingdom; he does not leave Thebes completely empty handed. Instead, he has replaced his pride with humility and in his blindness he is able to see more clearly. “”Pitiful, you suffer so, you understand so much/I wish you had never known (241 1481-1482). Thus, Oedipus the King meets another one of Aristotle’s requirements, the hero should gain something from the experience, whether it is wisdom, self-awareness, or knowledge (Aristotle par 5).

Oedipus the King and Aristotle. (2019, Dec 31). Retrieved from https://papersowl.com/examples/oedipus-the-king-and-aristotle/

Oedipus the King by Sophocles

Should Oedipus be Held Responsible for Killing Laius