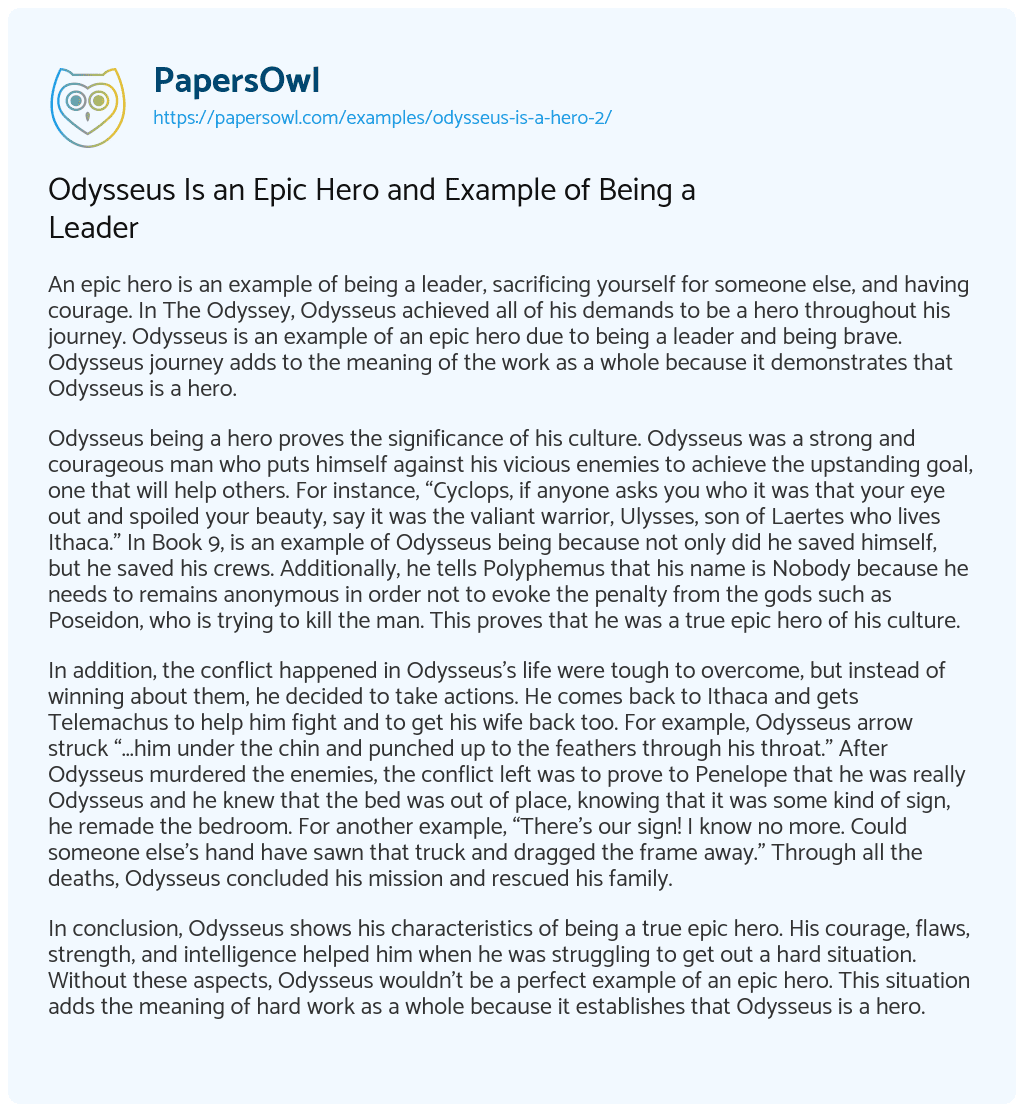 Odysseus being a hero proves the significance of his culture. Odysseus was a strong and courageous man who puts himself against his vicious enemies to achieve the upstanding goal, one that will help others. For instance, “Cyclops, if anyone asks you who it was that your eye out and spoiled your beauty, say it was the valiant warrior, Ulysses, son of Laertes who lives Ithaca.” In Book 9, is an example of Odysseus being because not only did he saved himself, but he saved his crews. Additionally, he tells Polyphemus that his name is Nobody because he needs to remains anonymous in order not to evoke the penalty from the gods such as Poseidon, who is trying to kill the man. This proves that he was a true epic hero of his culture.

In addition, the conflict happened in Odysseus’s life were tough to overcome, but instead of winning about them, he decided to take actions. He comes back to Ithaca and gets Telemachus to help him fight and to get his wife back too. For example, Odysseus arrow struck “…him under the chin and punched up to the feathers through his throat.” After Odysseus murdered the enemies, the conflict left was to prove to Penelope that he was really Odysseus and he knew that the bed was out of place, knowing that it was some kind of sign, he remade the bedroom. For another example, “There’s our sign! I know no more. Could someone else’s hand have sawn that truck and dragged the frame away.” Through all the deaths, Odysseus concluded his mission and rescued his family.

In conclusion, Odysseus shows his characteristics of being a true epic hero. His courage, flaws, strength, and intelligence helped him when he was struggling to get out a hard situation. Without these aspects, Odysseus wouldn’t be a perfect example of an epic hero. This situation adds the meaning of hard work as a whole because it establishes that Odysseus is a hero.

Odysseus Is an Epic Hero and Example of Being a Leader. (2020, Mar 19). Retrieved from https://papersowl.com/examples/odysseus-is-a-hero-2/

Is Odysseus a Hero: Essay on the Main Character of Homer’s Epic Poem