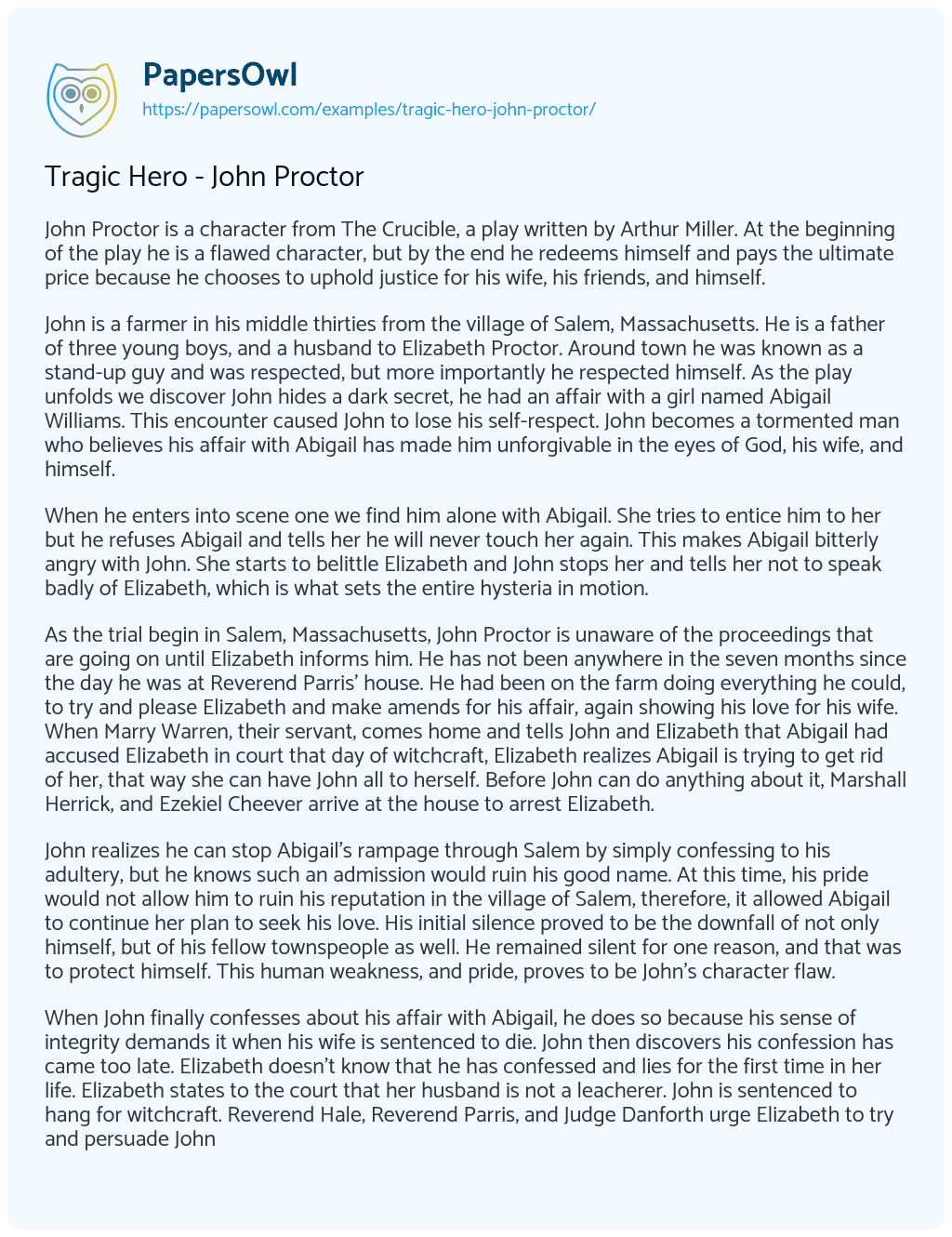 John Proctor is a character from The Crucible, a play written by Arthur Miller. At the beginning of the play he is a flawed character, but by the end he redeems himself and pays the ultimate price because he chooses to uphold justice for his wife, his friends, and himself.

John is a farmer in his middle thirties from the village of Salem, Massachusetts. He is a father of three young boys, and a husband to Elizabeth Proctor. Around town he was known as a stand-up guy and was respected, but more importantly he respected himself. As the play unfolds we discover John hides a dark secret, he had an affair with a girl named Abigail Williams. This encounter caused John to lose his self-respect. John becomes a tormented man who believes his affair with Abigail has made him unforgivable in the eyes of God, his wife, and himself.

When he enters into scene one we find him alone with Abigail. She tries to entice him to her but he refuses Abigail and tells her he will never touch her again. This makes Abigail bitterly angry with John. She starts to belittle Elizabeth and John stops her and tells her not to speak badly of Elizabeth, which is what sets the entire hysteria in motion.

As the trial begin in Salem, Massachusetts, John Proctor is unaware of the proceedings that are going on until Elizabeth informs him. He has not been anywhere in the seven months since the day he was at Reverend Parris’ house. He had been on the farm doing everything he could, to try and please Elizabeth and make amends for his affair, again showing his love for his wife. When Marry Warren, their servant, comes home and tells John and Elizabeth that Abigail had accused Elizabeth in court that day of witchcraft, Elizabeth realizes Abigail is trying to get rid of her, that way she can have John all to herself. Before John can do anything about it, Marshall Herrick, and Ezekiel Cheever arrive at the house to arrest Elizabeth.

John realizes he can stop Abigail’s rampage through Salem by simply confessing to his adultery, but he knows such an admission would ruin his good name. At this time, his pride would not allow him to ruin his reputation in the village of Salem, therefore, it allowed Abigail to continue her plan to seek his love. His initial silence proved to be the downfall of not only himself, but of his fellow townspeople as well. He remained silent for one reason, and that was to protect himself. This human weakness, and pride, proves to be John’s character flaw.

When John finally confesses about his affair with Abigail, he does so because his sense of integrity demands it when his wife is sentenced to die. John then discovers his confession has came too late. Elizabeth doesn’t know that he has confessed and lies for the first time in her life. Elizabeth states to the court that her husband is not a leacherer. John is sentenced to hang for witchcraft. Reverend Hale, Reverend Parris, and Judge Danforth urge Elizabeth to try and persuade John to sign a confession of guilt to witchcraft to save him. Elizabeth tells John he is a good man whatever he decides to do. She tells him he is not the only one to blame for his sins. That she was a cold, and frigid women which also contributed to his affair with Abigail.

In the end, John decides he will not sign his name to a written confession because it would mean he sold out his friends by lying about them as well as himself. He also refuses to confess and goes to his hanging a free man having found “his goodness” as Elizabeth Proctor says.