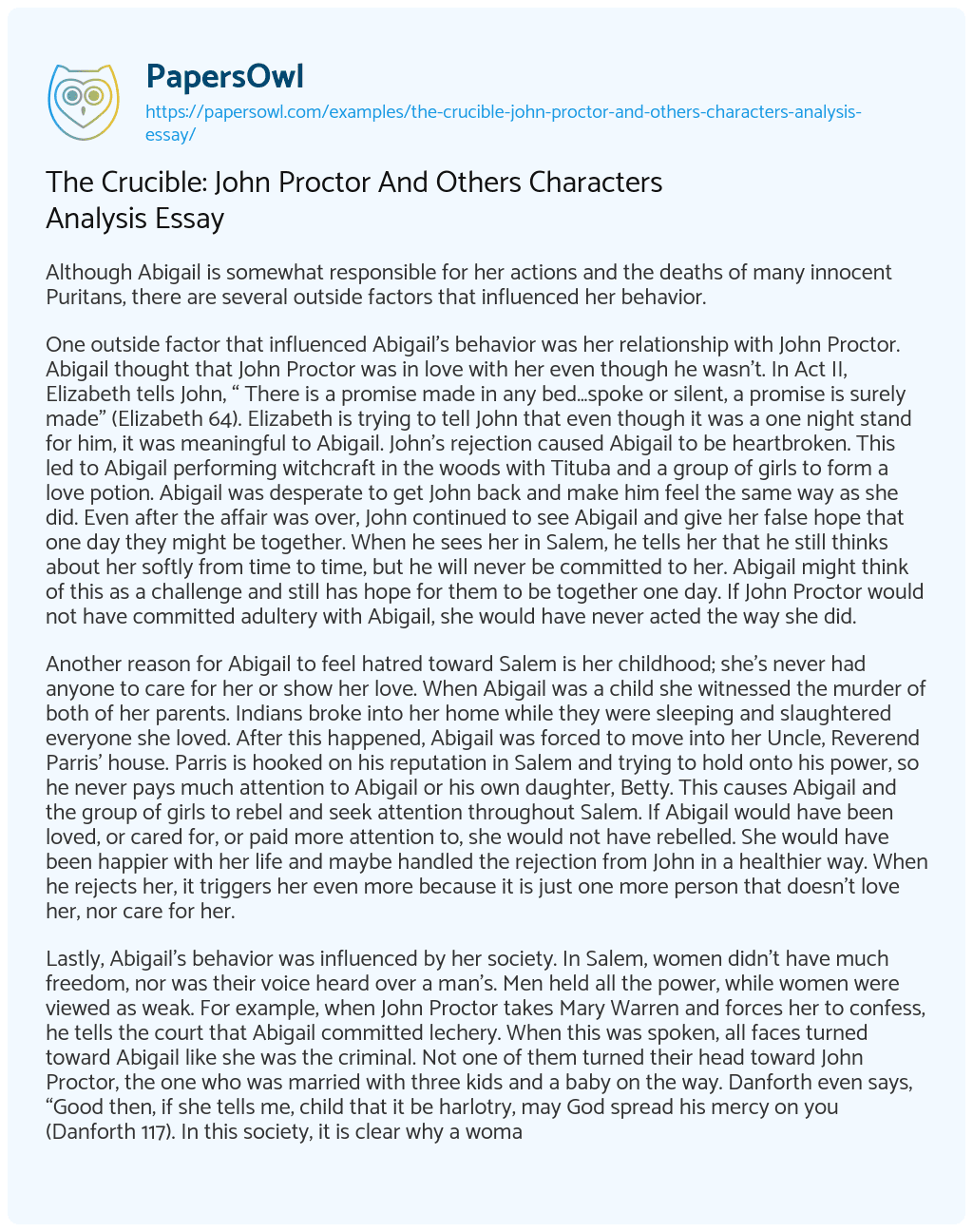 Although Abigail is somewhat responsible for her actions and the deaths of many innocent Puritans, there are several outside factors that influenced her behavior.

One outside factor that influenced Abigail’s behavior was her relationship with John Proctor. Abigail thought that John Proctor was in love with her even though he wasn’t. In Act II, Elizabeth tells John, “ There is a promise made in any bed…spoke or silent, a promise is surely made” (Elizabeth 64). Elizabeth is trying to tell John that even though it was a one night stand for him, it was meaningful to Abigail. John’s rejection caused Abigail to be heartbroken. This led to Abigail performing witchcraft in the woods with Tituba and a group of girls to form a love potion. Abigail was desperate to get John back and make him feel the same way as she did. Even after the affair was over, John continued to see Abigail and give her false hope that one day they might be together. When he sees her in Salem, he tells her that he still thinks about her softly from time to time, but he will never be committed to her. Abigail might think of this as a challenge and still has hope for them to be together one day. If John Proctor would not have committed adultery with Abigail, she would have never acted the way she did.

Another reason for Abigail to feel hatred toward Salem is her childhood; she’s never had anyone to care for her or show her love. When Abigail was a child she witnessed the murder of both of her parents. Indians broke into her home while they were sleeping and slaughtered everyone she loved. After this happened, Abigail was forced to move into her Uncle, Reverend Parris’ house. Parris is hooked on his reputation in Salem and trying to hold onto his power, so he never pays much attention to Abigail or his own daughter, Betty. This causes Abigail and the group of girls to rebel and seek attention throughout Salem. If Abigail would have been loved, or cared for, or paid more attention to, she would not have rebelled. She would have been happier with her life and maybe handled the rejection from John in a healthier way. When he rejects her, it triggers her even more because it is just one more person that doesn’t love her, nor care for her.

Lastly, Abigail’s behavior was influenced by her society. In Salem, women didn’t have much freedom, nor was their voice heard over a man’s. Men held all the power, while women were viewed as weak. For example, when John Proctor takes Mary Warren and forces her to confess, he tells the court that Abigail committed lechery. When this was spoken, all faces turned toward Abigail like she was the criminal. Not one of them turned their head toward John Proctor, the one who was married with three kids and a baby on the way. Danforth even says, “Good then, if she tells me, child that it be harlotry, may God spread his mercy on you (Danforth 117). In this society, it is clear why a woman would not ever want to tell the truth when all the blame will lead back to her.

Although Abigail made some poor choices, it was not all her fault. There were several outside forces that led to her actions. More responsibility should have been put on John Proctor; he gave her false hope and misled her in the wrong direction. Parris should also be more to blame for her actions because as a family member, he should have loved and cared for her more than worrying about his own reputation. And family, had Abigail lived in a more equal society, she may not been heartbroken or careless about her actions.

The Crucible: John Proctor And Others Characters Analysis Essay. (2022, Jun 22). Retrieved from https://papersowl.com/examples/the-crucible-john-proctor-and-others-characters-analysis-essay/