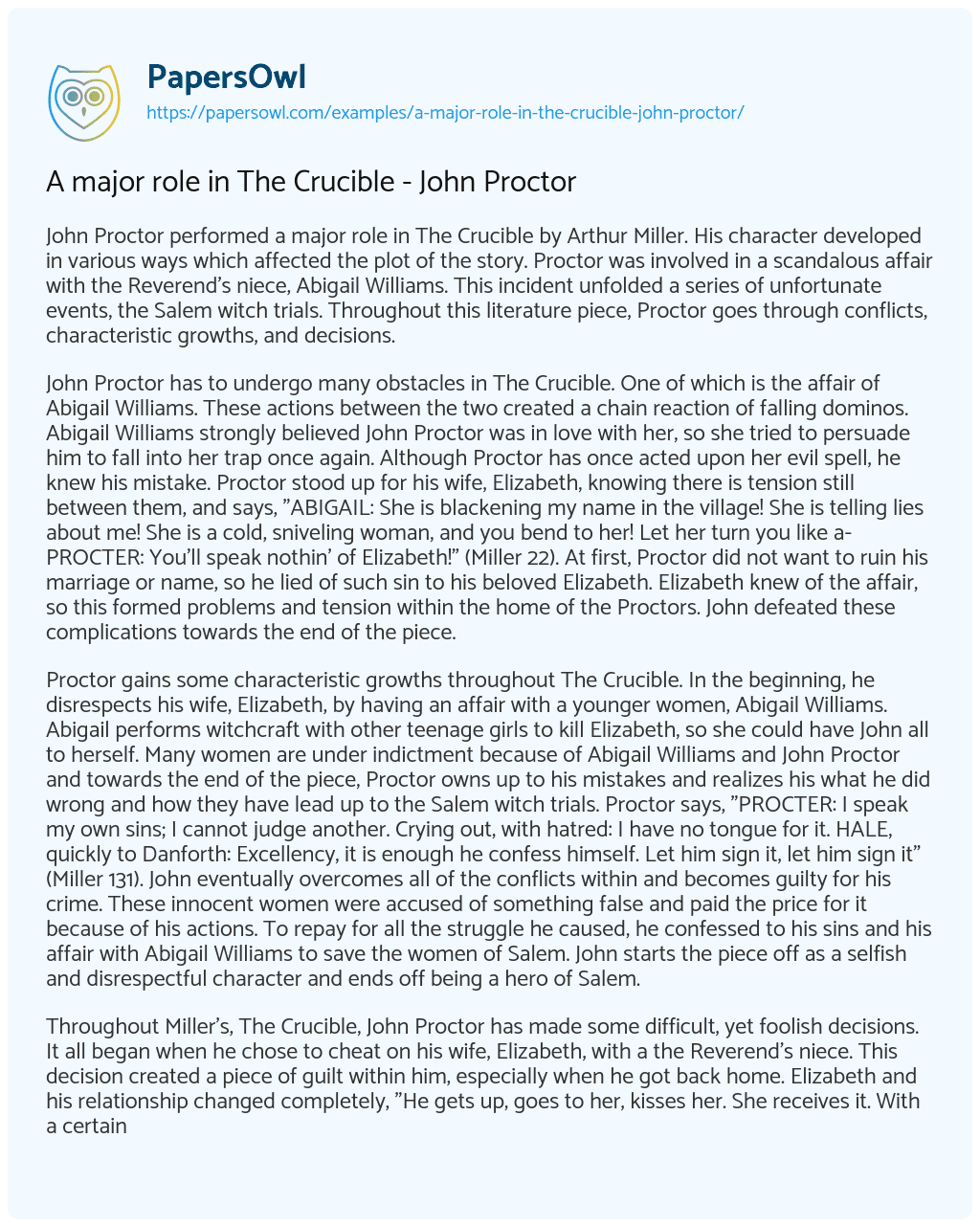 John Proctor performed a major role in The Crucible by Arthur Miller. His character developed in various ways which affected the plot of the story. Proctor was involved in a scandalous affair with the Reverend’s niece, Abigail Williams. This incident unfolded a series of unfortunate events, the Salem witch trials. Throughout this literature piece, Proctor goes through conflicts, characteristic growths, and decisions.

John Proctor has to undergo many obstacles in The Crucible. One of which is the affair of Abigail Williams. These actions between the two created a chain reaction of falling dominos. Abigail Williams strongly believed John Proctor was in love with her, so she tried to persuade him to fall into her trap once again. Although Proctor has once acted upon her evil spell, he knew his mistake. Proctor stood up for his wife, Elizabeth, knowing there is tension still between them, and says, “ABIGAIL: She is blackening my name in the village! She is telling lies about me! She is a cold, sniveling woman, and you bend to her! Let her turn you like a- PROCTER: You’ll speak nothin’ of Elizabeth!” (Miller 22). At first, Proctor did not want to ruin his marriage or name, so he lied of such sin to his beloved Elizabeth. Elizabeth knew of the affair, so this formed problems and tension within the home of the Proctors. John defeated these complications towards the end of the piece.

Proctor gains some characteristic growths throughout The Crucible. In the beginning, he disrespects his wife, Elizabeth, by having an affair with a younger women, Abigail Williams. Abigail performs witchcraft with other teenage girls to kill Elizabeth, so she could have John all to herself. Many women are under indictment because of Abigail Williams and John Proctor and towards the end of the piece, Proctor owns up to his mistakes and realizes his what he did wrong and how they have lead up to the Salem witch trials. Proctor says, “PROCTER: I speak my own sins; I cannot judge another. Crying out, with hatred: I have no tongue for it. HALE, quickly to Danforth: Excellency, it is enough he confess himself. Let him sign it, let him sign it” (Miller 131). John eventually overcomes all of the conflicts within and becomes guilty for his crime. These innocent women were accused of something false and paid the price for it because of his actions. To repay for all the struggle he caused, he confessed to his sins and his affair with Abigail Williams to save the women of Salem. John starts the piece off as a selfish and disrespectful character and ends off being a hero of Salem.

Throughout Miller’s, The Crucible, John Proctor has made some difficult, yet foolish decisions. It all began when he chose to cheat on his wife, Elizabeth, with a the Reverend’s niece. This decision created a piece of guilt within him, especially when he got back home. Elizabeth and his relationship changed completely, “He gets up, goes to her, kisses her. She receives it. With a certain disappointment, he returns to the table” (Miller 48). Towards the end of the play, Proctor’s character changed, which affected his decision making. He started coming forward with his sins to protect his wife, “On the last night of my joy, some eight months past. She [Abigail] used to serve me in my house, sir. He has to clamp his jaw to keep from weeping” (Miller 102). Proctor chooses to come forward with his mistake and affair with young Abigail instead of hiding his secret like he did before. He chose to come forward in order to save his wife from her false consequences. Another piece of Proctor making a decision is when he did not want to lose his name. Proctor lost everything once he confessed to lechery. The one thing he did not want to lose was his name, “Because I am not worth the dust on my feet of them that hang! How may I will without my name? I have given you my soul; leave me my name!” (Miller 133). Proctor just wants to save his name so society will not think of him in a bad way. He wants to keep his name so he does not lose everything about him.

A major role in The Crucible - John Proctor. (2020, Feb 14). Retrieved from https://papersowl.com/examples/a-major-role-in-the-crucible-john-proctor/

John Proctor a One Man Show

The Crucible: Tell the Truth