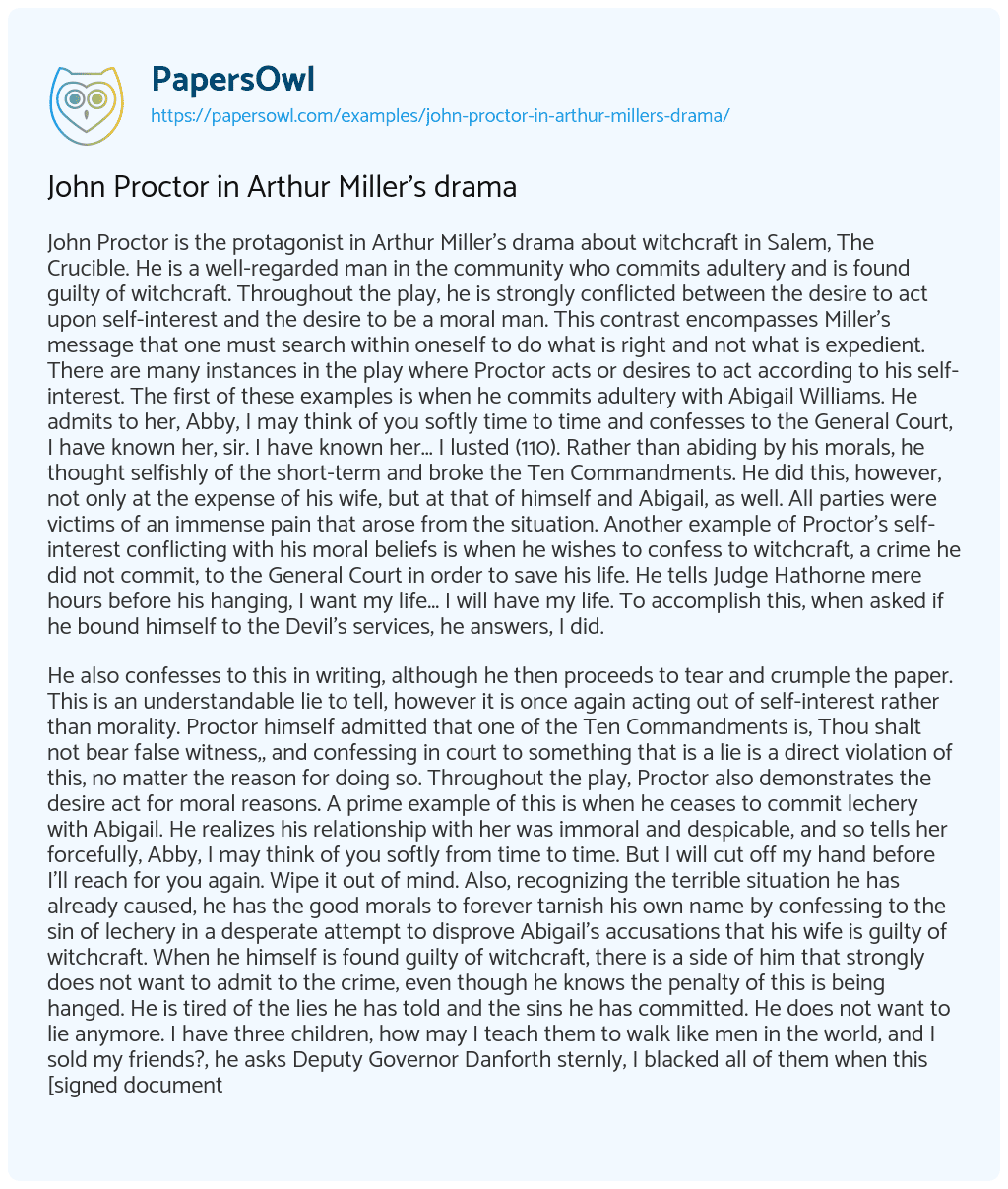 John Proctor is the protagonist in Arthur Miller’s drama about witchcraft in Salem, The Crucible. He is a well-regarded man in the community who commits adultery and is found guilty of witchcraft. Throughout the play, he is strongly conflicted between the desire to act upon self-interest and the desire to be a moral man. This contrast encompasses Miller’s message that one must search within oneself to do what is right and not what is expedient. There are many instances in the play where Proctor acts or desires to act according to his self- interest. The first of these examples is when he commits adultery with Abigail Williams. He admits to her, Abby, I may think of you softly time to time and confesses to the General Court, I have known her, sir. I have known her… I lusted (110). Rather than abiding by his morals, he thought selfishly of the short-term and broke the Ten Commandments. He did this, however, not only at the expense of his wife, but at that of himself and Abigail, as well. All parties were victims of an immense pain that arose from the situation. Another example of Proctor’s self-interest conflicting with his moral beliefs is when he wishes to confess to witchcraft, a crime he did not commit, to the General Court in order to save his life. He tells Judge Hathorne mere hours before his hanging, I want my life… I will have my life. To accomplish this, when asked if he bound himself to the Devil’s services, he answers, I did.

He also confesses to this in writing, although he then proceeds to tear and crumple the paper. This is an understandable lie to tell, however it is once again acting out of self-interest rather than morality. Proctor himself admitted that one of the Ten Commandments is, Thou shalt not bear false witness,, and confessing in court to something that is a lie is a direct violation of this, no matter the reason for doing so. Throughout the play, Proctor also demonstrates the desire act for moral reasons. A prime example of this is when he ceases to commit lechery with Abigail. He realizes his relationship with her was immoral and despicable, and so tells her forcefully, Abby, I may think of you softly from time to time. But I will cut off my hand before I’ll reach for you again. Wipe it out of mind. Also, recognizing the terrible situation he has already caused, he has the good morals to forever tarnish his own name by confessing to the sin of lechery in a desperate attempt to disprove Abigail’s accusations that his wife is guilty of witchcraft. When he himself is found guilty of witchcraft, there is a side of him that strongly does not want to admit to the crime, even though he knows the penalty of this is being hanged. He is tired of the lies he has told and the sins he has committed. He does not want to lie anymore. I have three children, how may I teach them to walk like men in the world, and I sold my friends?, he asks Deputy Governor Danforth sternly, I blacked all of them when this [signed document of my confession] is nailed to the church the very day they hang for silence!. With this said, he proceeds to rip up the document, securing his hanging. He then utters, while I tears, …for now I do think I see a shred of goodness in John Proctor.

Not enough to weave a banner with, but enough to keep it from such dogs. This final, valiant stand shows that Proctor truly does care about morals and is willing to pay the ultimate price for them. After being confronted throughout the play with regards to whether or not to act upon self-interest or morals, Proctor made his final decision in the final moments of the play. He chose morals, and in doing Crucible 5 Paragraph Essay By: Jaedin C. 11/09/18 so found goodness within himself. This is summed up well in the final line of the play. When asked to attempt to persuade her husband to lie and confess to witchcraft in order to save his life, Elizabeth Proctor responded with a cry, He have his goodness now. God forbid I take it away from him!. This is a very powerful concluding line, and it reinforces the overall message that Miller is attempting to leave readers with: that one must do what is right and not what is expedient. If everyone had done this in the first place, the witchcraft scandal would have been nonexistent. People would have been honest in their testimonies and would not have unfairly accused others of witchcraft, which was the fuel of the ferocious, forever-flaming fire. When this feat of doing what is right rather than what is expedient is fulfilled, anyone  even those as sinful and miserable as John Proctor in his latter stagescan find goodness within themselves. To conclude in the play, The Crucible there was a lot of horrific events that happened. Such as Tituba being accused of witch craft and hung as a result of it.