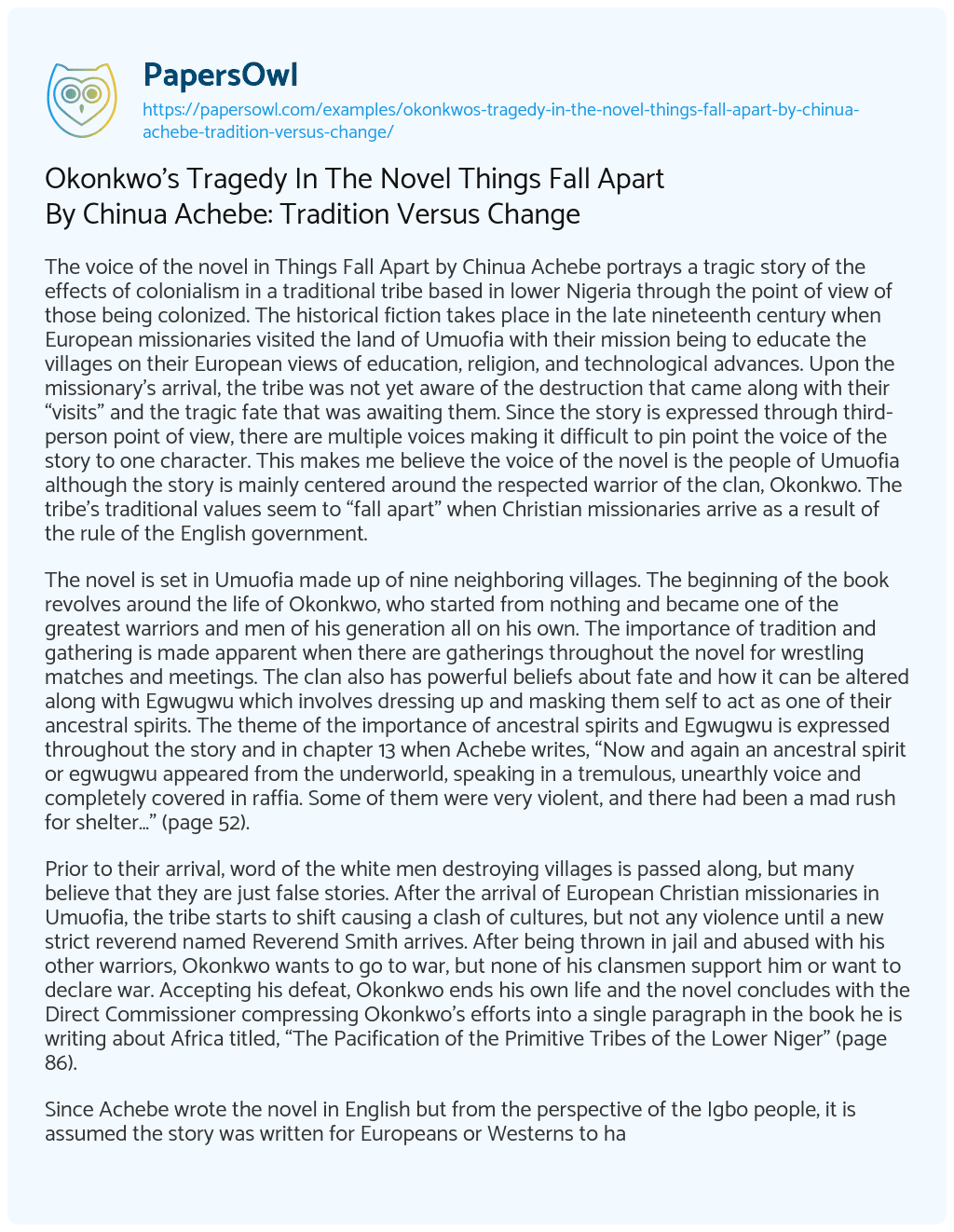 The voice of the novel in Things Fall Apart by Chinua Achebe portrays a tragic story of the effects of colonialism in a traditional tribe based in lower Nigeria through the point of view of those being colonized. The historical fiction takes place in the late nineteenth century when European missionaries visited the land of Umuofia with their mission being to educate the villages on their European views of education, religion, and technological advances. Upon the missionary’s arrival, the tribe was not yet aware of the destruction that came along with their “visits” and the tragic fate that was awaiting them. Since the story is expressed through third-person point of view, there are multiple voices making it difficult to pin point the voice of the story to one character. This makes me believe the voice of the novel is the people of Umuofia although the story is mainly centered around the respected warrior of the clan, Okonkwo. The tribe’s traditional values seem to “fall apart” when Christian missionaries arrive as a result of the rule of the English government.

The novel is set in Umuofia made up of nine neighboring villages. The beginning of the book revolves around the life of Okonkwo, who started from nothing and became one of the greatest warriors and men of his generation all on his own. The importance of tradition and gathering is made apparent when there are gatherings throughout the novel for wrestling matches and meetings. The clan also has powerful beliefs about fate and how it can be altered along with Egwugwu which involves dressing up and masking them self to act as one of their ancestral spirits. The theme of the importance of ancestral spirits and Egwugwu is expressed throughout the story and in chapter 13 when Achebe writes, “Now and again an ancestral spirit or egwugwu appeared from the underworld, speaking in a tremulous, unearthly voice and completely covered in raffia. Some of them were very violent, and there had been a mad rush for shelter…” (page 52).

Prior to their arrival, word of the white men destroying villages is passed along, but many believe that they are just false stories. After the arrival of European Christian missionaries in Umuofia, the tribe starts to shift causing a clash of cultures, but not any violence until a new strict reverend named Reverend Smith arrives. After being thrown in jail and abused with his other warriors, Okonkwo wants to go to war, but none of his clansmen support him or want to declare war. Accepting his defeat, Okonkwo ends his own life and the novel concludes with the Direct Commissioner compressing Okonkwo’s efforts into a single paragraph in the book he is writing about Africa titled, “The Pacification of the Primitive Tribes of the Lower Niger” (page 86).

Since Achebe wrote the novel in English but from the perspective of the Igbo people, it is assumed the story was written for Europeans or Westerns to have a deeper understanding on the effects of colonialism, but since it also includes native songs and words connections can be made to multiple cultures. Achebe wrote the novel in response to the many other readings written by white men that contained African stereotypes and failed to express the true complexity within different cultures and long-lasting effects of colonialism. Things Fall Apart was published in 1958 and was an instant hit in many schools throughout the world for its educational value about the clash of cultures in Nigeria when the colonial government was in rule.

The author intended for this book to tell the story of colonization from the point of view of the colonized. I believe more specifically, the author wanted to express how it affected people in different ways by giving the novel multiple voices, and the voices that stood out to me were Okonkwo’s, his son Nwoye’s, and his daughter Ezinma’s. Okonkwo expressed the voice of fear when he feared losing traditional ways and looking weak or lazy like his father. The author supports this when he writes, “When Unoka died he had taken no title at all and he was heavily in debt. Any wonder then that his son Okonkwo was ashamed of him?

Fortunately, among these people a man was judged according to his worth and not according to the worth of his father” (page 5). Okonkwo’s fear is also drawn out by his son not being as masculine and war driven as him which causes his son to feel the same way about his dad as Okonkwo felt towards his father. His son Nwoye, expressed the voice of struggle through the rejection of his father, but then acceptance from others when he joins Christianity. “Nwoye, among the missionaries in Umuofia. ‘What are you doing here?’ Obierika had asked when after many difficulties the missionaries had allowed him to speak to the boy. ‘I am one of them,’ replied Nwoye. ‘How is your father?’ Obierika asked, not knowing what else to say. ‘I don’t know. He is not my father,’ said Nwoye, unhappily” (page 60). Similarly, Nwoye rejects his father and wants nothing to do with him. Okonkwo and Nwoye’s voices can be comparable at times, but both send out different messages throughout the story.

The third voice of the novel is compassion which is expressed by Okonkwo’s daughter Ezinma, through the understanding of her father and making him feel affection for her, although he never physically expresses it. She reminds him a lot of himself being that she is driven and not weak making him wish she were a boy because he can see her protentional. Okonkwo often thinks to himself, “She should have been a boy,” referring to Ezinma which although not physical, it does show his appreciation for her after she tends to him. (page 28). The reason Okonkwo doesn’t show affection towards the people he cares about is because of his fear of looking weak and vulnerable. Finally, the reoccurring theme of death expresses its own voice of loss through the deaths of Ikemefuna, Ezeudu’s son and Okonkwo.

The death of Ikemefuna is a tragic death which Okonkwo wanted to take no part in but ended being the one to kill him out of the reoccurring fear of looking weak. Although Ezedu’s death was an accident due to a gun malfunction it created not only a loss of a life, but also the loss of Okonkwo’s land through exile. Following the warriors exile, Okonkwo’s closest friend, Obierika thought to himself, “Why should a man suffer so grievously for an offense he had committed inadvertently?” (page 101). All the fear and misfortunes eventually got to Okonkwo’s head leading to him hanging himself after killing one of the messengers. He was so against change of their traditions that he felt the only way to keep from accepting these changes was to end his own life. In an angry response to this Obierika says to the Direct Commissioner,” “That man was one of the greatest men in Umuofia. You drove him to kill himself and now he will be buried like a dog…” (page 85). The voice of tribe as a whole often expressed unhappiness following the arrival of the missionaries.

The voice of the Umuofia clan holds distrust and frustration that is made apparent throughout the novel. The first and only reference to the books title is in chapter 20 by Obierika when he’s talking to Okonkwo and says, “The white man is very clever. He came quietly and peaceably with his religion. We were amused at his foolishness and allowed him to stay. Now he has won our brothers, and our clan can no longer act like one. He has put a knife on the things that held us together and we have fallen apart” (page 73). This quote expresses the frustration after many people including Okonkwo’s son has accepted the beliefs of Christianity because the missionaries told them their belief system was false. Although they did tell them their beliefs were false, not all Christian missionaries were close minded about other believes like reverend Smith. The first missionary in Umuofia, Mr. Brown, was understanding and respected their traditional beliefs, but still worked to convert them. Okonkwo’s frustration is especially high because he worked so hard throughout his life to not be lazy like his father and become a leader in his tribe just to be exiled then return to Umuofia with a whole different lifestyle run by the white men. The voices of Okonkwo and Obierika are full of fear and anger because the missionaries were able to change their religious views which showed their lack of respect towards Igbo traditions.

The main theme of the novel was conflict which arose from the changing of traditions when the missionaries arrived. Many villagers including Okonkwo’s son were happy about change and looked forward to new systems, but others such as Okonkwo refuted the change. The conflicts between progression and tradition were divided by those in the villages who were considered outsiders and those who had a title. Outsiders were in support of the progress away from traditions because this change could result in them feeling included and like they had a significant part in the society with the new religion. People such as Okonkwo who already had a title and respect with the traditional ways did not want change because of the fear that he would lose what he worked so hard for. Igbo people were not uneducated savages that many of the white men described them as, they were apart of a complex society with many values and traditions that created a sense of community which is told through the many voices in the novel.

A Cultural Note on Okonkwo’s Suicide in Things Fall Apart

Okonkwo is the Legend of the Novel Things Fall Apart