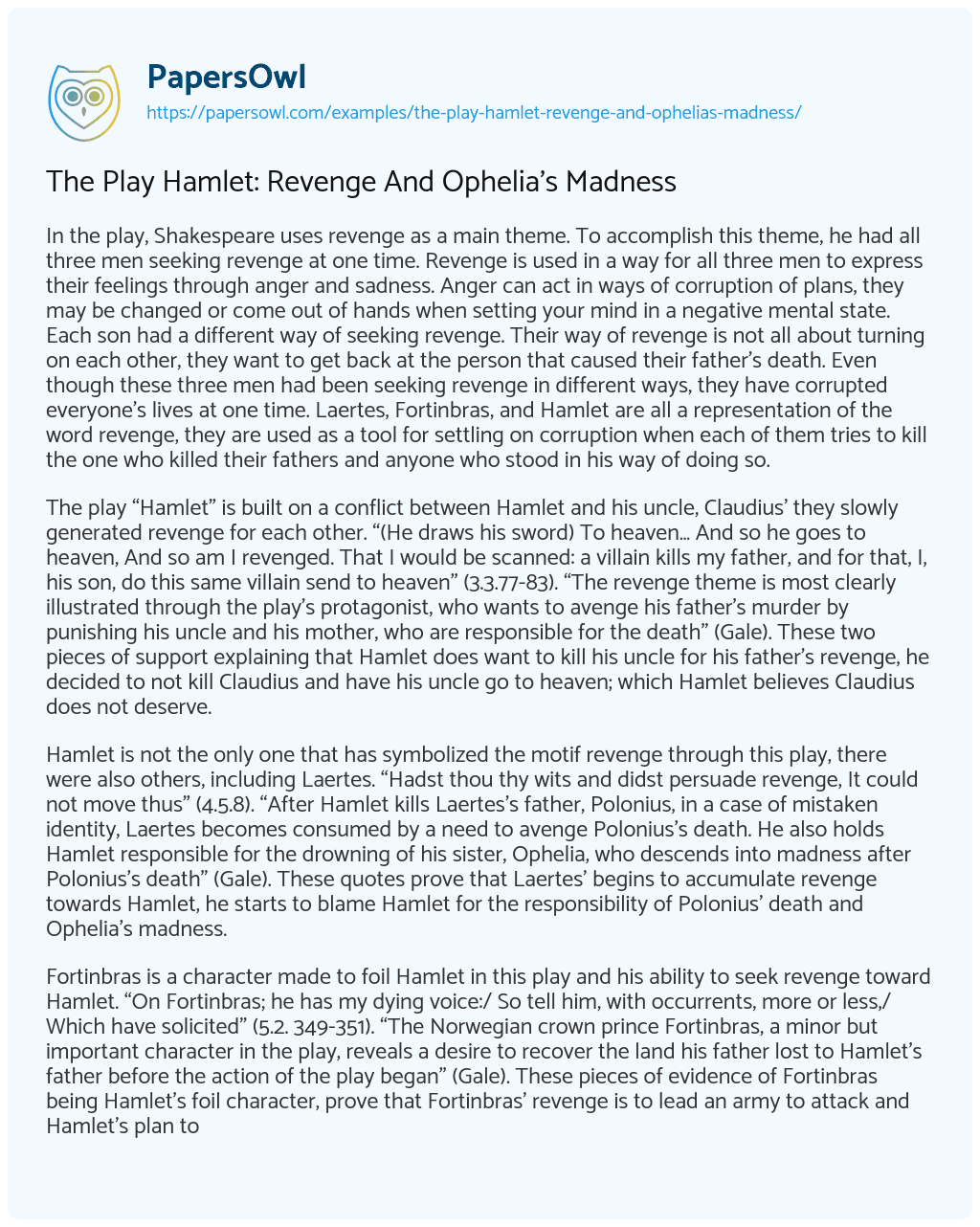 In the play, Shakespeare uses revenge as a main theme. To accomplish this theme, he had all three men seeking revenge at one time. Revenge is used in a way for all three men to express their feelings through anger and sadness. Anger can act in ways of corruption of plans, they may be changed or come out of hands when setting your mind in a negative mental state. Each son had a different way of seeking revenge. Their way of revenge is not all about turning on each other, they want to get back at the person that caused their father’s death. Even though these three men had been seeking revenge in different ways, they have corrupted everyone’s lives at one time. Laertes, Fortinbras, and Hamlet are all a representation of the word revenge, they are used as a tool for settling on corruption when each of them tries to kill the one who killed their fathers and anyone who stood in his way of doing so.

The play “Hamlet” is built on a conflict between Hamlet and his uncle, Claudius’ they slowly generated revenge for each other. “(He draws his sword) To heaven… And so he goes to heaven, And so am I revenged. That I would be scanned: a villain kills my father, and for that, I, his son, do this same villain send to heaven” (3.3.77-83). “The revenge theme is most clearly illustrated through the play’s protagonist, who wants to avenge his father’s murder by punishing his uncle and his mother, who are responsible for the death” (Gale). These two pieces of support explaining that Hamlet does want to kill his uncle for his father’s revenge, he decided to not kill Claudius and have his uncle go to heaven; which Hamlet believes Claudius does not deserve.

Hamlet is not the only one that has symbolized the motif revenge through this play, there were also others, including Laertes. “Hadst thou thy wits and didst persuade revenge, It could not move thus” (4.5.8). “After Hamlet kills Laertes’s father, Polonius, in a case of mistaken identity, Laertes becomes consumed by a need to avenge Polonius’s death. He also holds Hamlet responsible for the drowning of his sister, Ophelia, who descends into madness after Polonius’s death” (Gale). These quotes prove that Laertes’ begins to accumulate revenge towards Hamlet, he starts to blame Hamlet for the responsibility of Polonius’ death and Ophelia’s madness.

Fortinbras is a character made to foil Hamlet in this play and his ability to seek revenge toward Hamlet. “On Fortinbras; he has my dying voice:/ So tell him, with occurrents, more or less,/ Which have solicited” (5.2. 349-351). “The Norwegian crown prince Fortinbras, a minor but important character in the play, reveals a desire to recover the land his father lost to Hamlet’s father before the action of the play began” (Gale). These pieces of evidence of Fortinbras being Hamlet’s foil character, prove that Fortinbras’ revenge is to lead an army to attack and Hamlet’s plan to attack is to act like something is wrong with him; Fortinbras is planning what he must do which was to avenge his father’s death and kill the new king of Denmark and Hamlet is one to go with what happens is meant to happen.

In conclusion, the main theme, revenge, did not succeed the way that they have all planned it should go. People had gotten in the mix of their pathways or had gotten in the way of their paths. Rosencrantz and also Guildenstern had gotten caught up in Claudius’ plans rather than help an old friend out, which led to their earlier deaths. All three boys, Laertes, Hamlet, Fortinbras, had started a revenge war between many more characters in the play. Claudius began to seek revenge much later on than the three men. The revenge between all of these characters had led to Queen Gertrude, Hamlet, Laertes, and also Claudius’ death. Even though they were not entirely responsible for Ophelia’s death, Hamlet did play a part in her thoughts, as she did commit. Polonius’ death was also caused because of Hamlet. Hamlet is blamed to have caused Claudius to have to look out for his own life, Ophelia had gone mad because of Hamlet’s thoughts that he never expressed to her. When Laertes seeks revenge, he led the duel in the final act which had caused everyone to go mad in the last scene. Revenge had gotten out of hands in ways due to expressing their anger on others rather than coping with their feelings toward each other.

Revenge is the Overarching Theme of the Play Hamlet