A Cultural Note on Okonkwo’s Suicide in Things Fall Apart 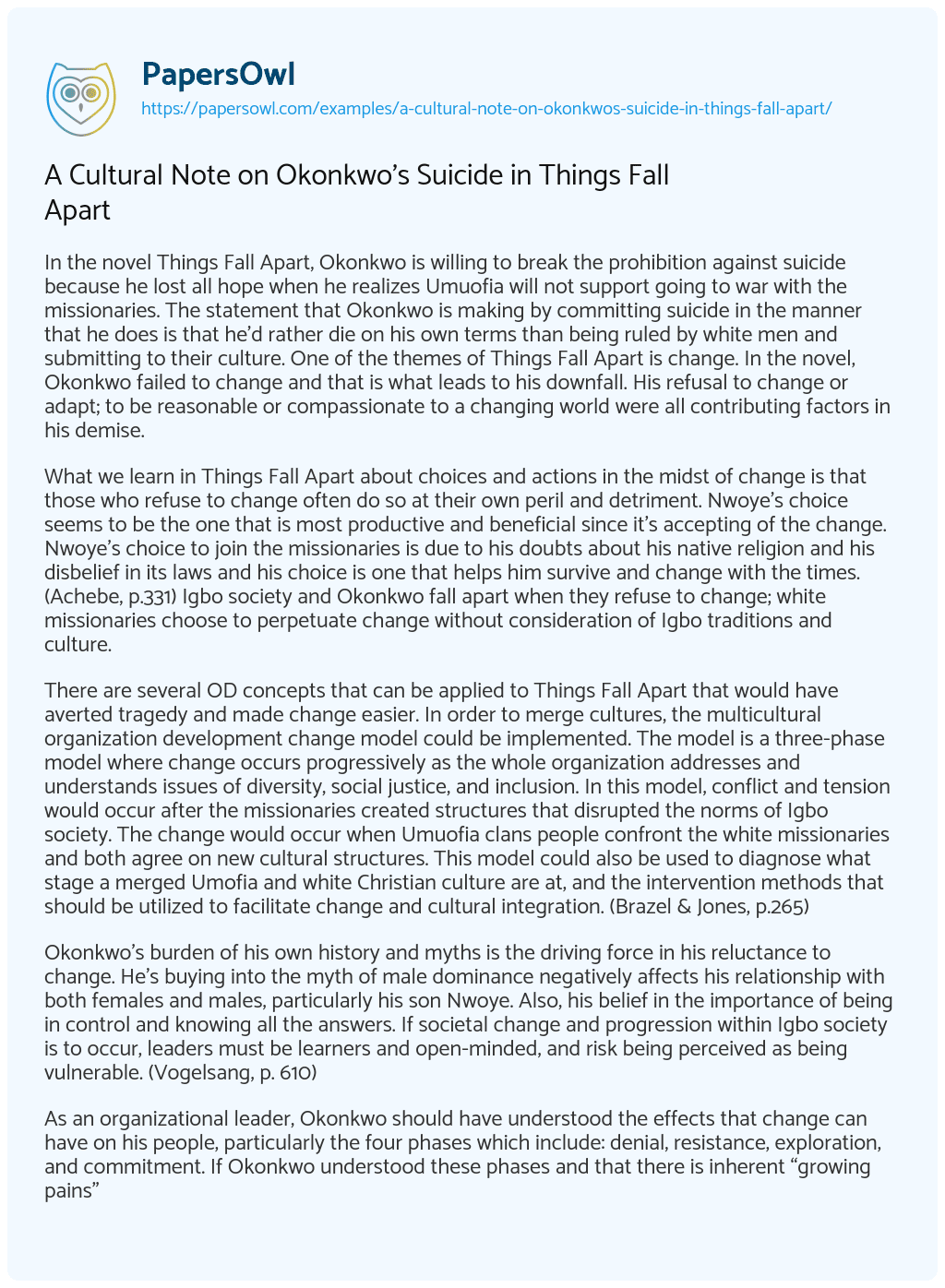 In the novel Things Fall Apart, Okonkwo is willing to break the prohibition against suicide because he lost all hope when he realizes Umuofia will not support going to war with the missionaries. The statement that Okonkwo is making by committing suicide in the manner that he does is that he’d rather die on his own terms than being ruled by white men and submitting to their culture. One of the themes of Things Fall Apart is change. In the novel, Okonkwo failed to change and that is what leads to his downfall. His refusal to change or adapt; to be reasonable or compassionate to a changing world were all contributing factors in his demise.

What we learn in Things Fall Apart about choices and actions in the midst of change is that those who refuse to change often do so at their own peril and detriment. Nwoye’s choice seems to be the one that is most productive and beneficial since it’s accepting of the change. Nwoye’s choice to join the missionaries is due to his doubts about his native religion and his disbelief in its laws and his choice is one that helps him survive and change with the times. (Achebe, p.331) Igbo society and Okonkwo fall apart when they refuse to change; white missionaries choose to perpetuate change without consideration of Igbo traditions and culture.

There are several OD concepts that can be applied to Things Fall Apart that would have averted tragedy and made change easier. In order to merge cultures, the multicultural organization development change model could be implemented. The model is a three-phase model where change occurs progressively as the whole organization addresses and understands issues of diversity, social justice, and inclusion. In this model, conflict and tension would occur after the missionaries created structures that disrupted the norms of Igbo society. The change would occur when Umuofia clans people confront the white missionaries and both agree on new cultural structures. This model could also be used to diagnose what stage a merged Umofia and white Christian culture are at, and the intervention methods that should be utilized to facilitate change and cultural integration. (Brazel & Jones, p.265)

Okonkwo’s burden of his own history and myths is the driving force in his reluctance to change. He’s buying into the myth of male dominance negatively affects his relationship with both females and males, particularly his son Nwoye. Also, his belief in the importance of being in control and knowing all the answers. If societal change and progression within Igbo society is to occur, leaders must be learners and open-minded, and risk being perceived as being vulnerable. (Vogelsang, p. 610)

As an organizational leader, Okonkwo should have understood the effects that change can have on his people, particularly the four phases which include: denial, resistance, exploration, and commitment. If Okonkwo understood these phases and that there is inherent “growing pains” in the process, he would have been less resistant, and Igbo society may not have perished (Brazel & Jones, p.290)

Okonkwo would have also benefited from knowing the importance of self-awareness (Vogelsang, p.169). In the book he is sometimes reflective, however, he does not seriously practice self-inquiry or reflect on what motivates and informs how he behaves and how that behavior negatively affects those around him. For instance, throughout the novel, he is driven by his hatred of his father but doesn’t understand the effect and impact it has on how he behaves. This lack of self-awareness is the reason he does not change in the novel and there is no personal growth.

Okonkwo is the Legend of the Novel Things Fall Apart