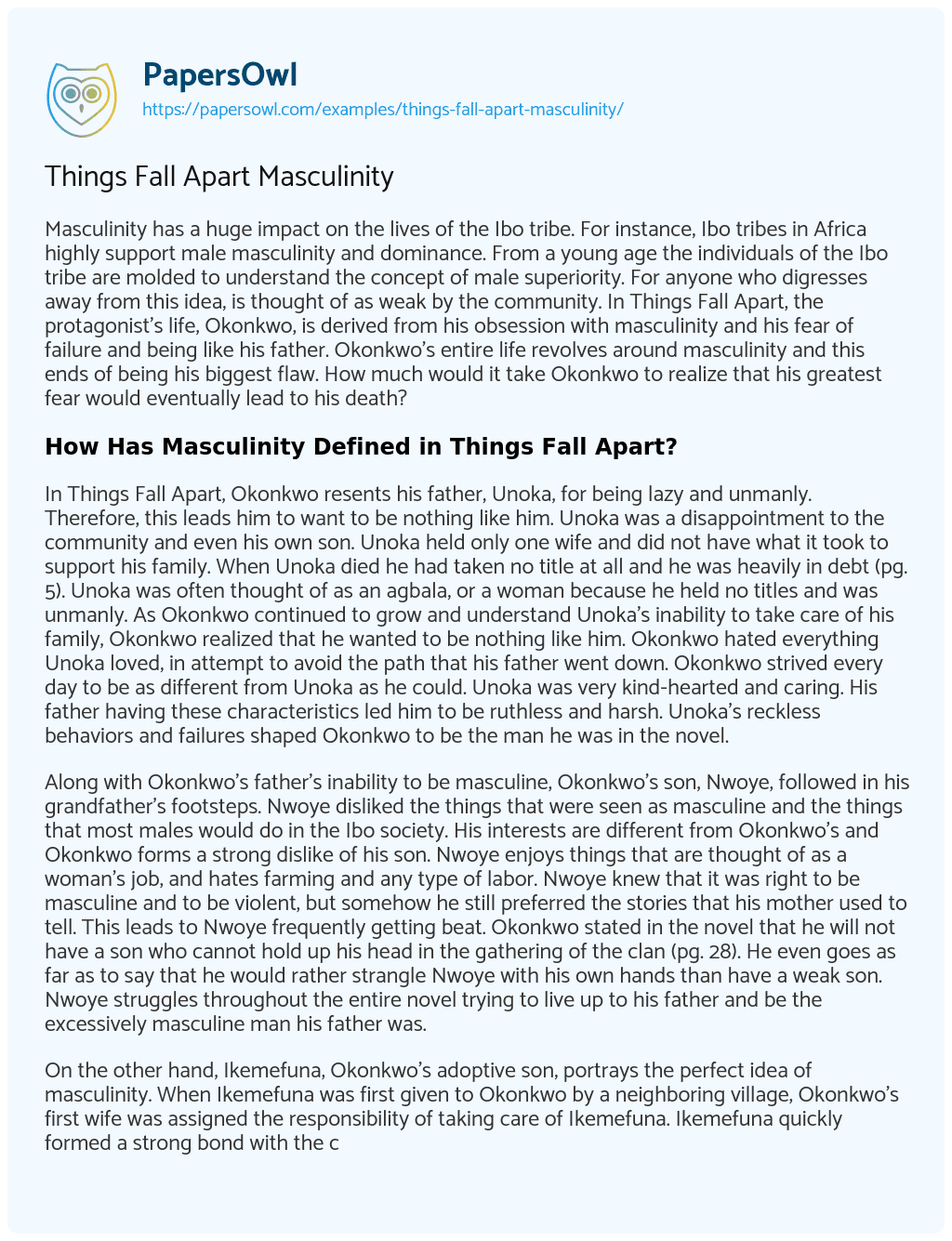 Masculinity has a huge impact on the lives of the Ibo tribe. For instance, Ibo tribes in Africa highly support male masculinity and dominance. From a young age the individuals of the Ibo tribe are molded to understand the concept of male superiority. For anyone who digresses away from this idea, is thought of as weak by the community. In Things Fall Apart, the protagonist’s life, Okonkwo, is derived from his obsession with masculinity and his fear of failure and being like his father. Okonkwo’s entire life revolves around masculinity and this ends of being his biggest flaw. How much would it take Okonkwo to realize that his greatest fear would eventually lead to his death?

How Has Masculinity Defined in Things Fall Apart?

In Things Fall Apart, Okonkwo resents his father, Unoka, for being lazy and unmanly. Therefore, this leads him to want to be nothing like him. Unoka was a disappointment to the community and even his own son. Unoka held only one wife and did not have what it took to support his family. When Unoka died he had taken no title at all and he was heavily in debt (pg. 5). Unoka was often thought of as an agbala, or a woman because he held no titles and was unmanly. As Okonkwo continued to grow and understand Unoka’s inability to take care of his family, Okonkwo realized that he wanted to be nothing like him. Okonkwo hated everything Unoka loved, in attempt to avoid the path that his father went down. Okonkwo strived every day to be as different from Unoka as he could. Unoka was very kind-hearted and caring. His father having these characteristics led him to be ruthless and harsh. Unoka’s reckless behaviors and failures shaped Okonkwo to be the man he was in the novel.

Along with Okonkwo’s father’s inability to be masculine, Okonkwo’s son, Nwoye, followed in his grandfather’s footsteps. Nwoye disliked the things that were seen as masculine and the things that most males would do in the Ibo society. His interests are different from Okonkwo’s and Okonkwo forms a strong dislike of his son. Nwoye enjoys things that are thought of as a woman’s job, and hates farming and any type of labor. Nwoye knew that it was right to be masculine and to be violent, but somehow he still preferred the stories that his mother used to tell. This leads to Nwoye frequently getting beat. Okonkwo stated in the novel that he will not have a son who cannot hold up his head in the gathering of the clan (pg. 28). He even goes as far as to say that he would rather strangle Nwoye with his own hands than have a weak son. Nwoye struggles throughout the entire novel trying to live up to his father and be the excessively masculine man his father was.

On the other hand, Ikemefuna, Okonkwo’s adoptive son, portrays the perfect idea of masculinity. When Ikemefuna was first given to Okonkwo by a neighboring village, Okonkwo’s first wife was assigned the responsibility of taking care of Ikemefuna. Ikemefuna quickly formed a strong bond with the children of Okonkwo and sooner than later formed a bond with Okonkwo himself. Ikemefuna was everything that Okonkwo looked for in a son: hard-working, strong-minded, masculine, and brave. Ikemefuna helped Okonkwo with the farming and even encouraged Nwoye to be more masculine and help with the things a man should do. Ikemefuna begins to be an older brother for Nwoye, and Nwoye greatly looks up to him. Ikemefuna’s presence in the family seems to make Nwoye become more mature and leads to him becoming more manly. Nwoye begins to spend more time with his father and takes on more masculine duties. Okonkwo was thrilled about the impact Ikemefuna made on Nwoye. Even though Okonkwo was extremely fond of Ikemefuna, he never showed it in fear of it making him seem weak, because Okonkwo believed that showing affection meant he was weak.

Throughout the entire novel, Okonkwo tries his hardest to be masculine despite the outcomes. In the end, Okonkwo ends up committing suicide after realizing there was nothing else he could do with his life. The more Okonkwo tried to show he wasn’t weak, the more miserable his life became.

About Westernization in “Things Fall Apart”