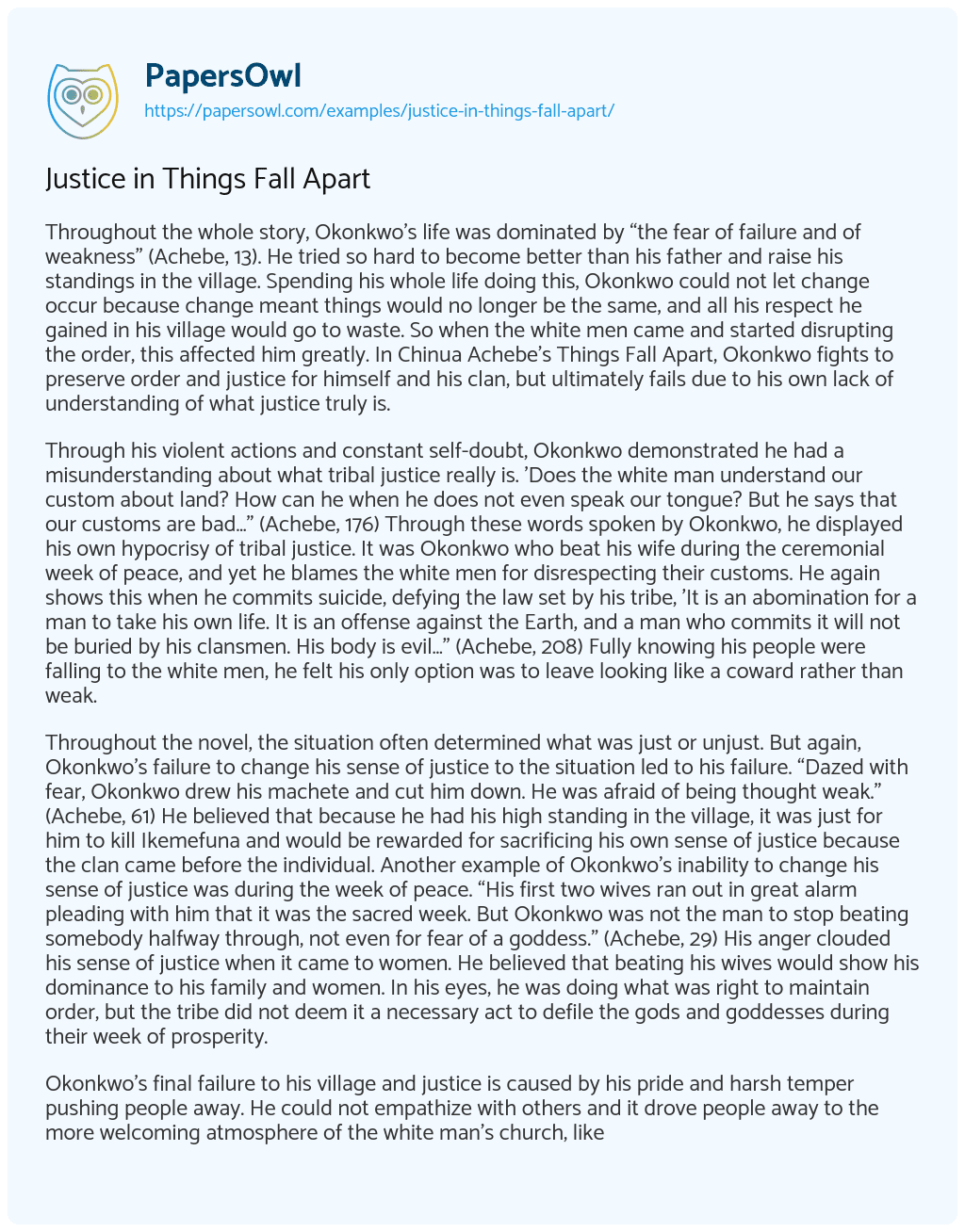 Throughout the whole story, Okonkwo’s life was dominated by “the fear of failure and of weakness” (Achebe, 13). He tried so hard to become better than his father and raise his standings in the village. Spending his whole life doing this, Okonkwo could not let change occur because change meant things would no longer be the same, and all his respect he gained in his village would go to waste. So when the white men came and started disrupting the order, this affected him greatly. In Chinua Achebe’s Things Fall Apart, Okonkwo fights to preserve order and justice for himself and his clan, but ultimately fails due to his own lack of understanding of what justice truly is.

Through his violent actions and constant self-doubt, Okonkwo demonstrated he had a misunderstanding about what tribal justice really is. ‘Does the white man understand our custom about land? How can he when he does not even speak our tongue? But he says that our customs are bad…” (Achebe, 176) Through these words spoken by Okonkwo, he displayed his own hypocrisy of tribal justice. It was Okonkwo who beat his wife during the ceremonial week of peace, and yet he blames the white men for disrespecting their customs. He again shows this when he commits suicide, defying the law set by his tribe, ‘It is an abomination for a man to take his own life. It is an offense against the Earth, and a man who commits it will not be buried by his clansmen. His body is evil…” (Achebe, 208) Fully knowing his people were falling to the white men, he felt his only option was to leave looking like a coward rather than weak.

Throughout the novel, the situation often determined what was just or unjust. But again, Okonkwo’s failure to change his sense of justice to the situation led to his failure. “Dazed with fear, Okonkwo drew his machete and cut him down. He was afraid of being thought weak.” (Achebe, 61) He believed that because he had his high standing in the village, it was just for him to kill Ikemefuna and would be rewarded for sacrificing his own sense of justice because the clan came before the individual. Another example of Okonkwo’s inability to change his sense of justice was during the week of peace. “His first two wives ran out in great alarm pleading with him that it was the sacred week. But Okonkwo was not the man to stop beating somebody halfway through, not even for fear of a goddess.” (Achebe, 29) His anger clouded his sense of justice when it came to women. He believed that beating his wives would show his dominance to his family and women. In his eyes, he was doing what was right to maintain order, but the tribe did not deem it a necessary act to defile the gods and goddesses during their week of prosperity.

Okonkwo’s final failure to his village and justice is caused by his pride and harsh temper pushing people away. He could not empathize with others and it drove people away to the more welcoming atmosphere of the white man’s church, like his son Nwoye. Nwoye despised everything about his father. Especially the constant beatings and disappointment, but after finding out Okonkwo killed Ikemefuna, something gave way inside him. When the white men came and brought their European Christianity, he converted. “Nwoye did not fully understand. But he was happy to leave his father.” (Achebe, 152) The last straw for Okonkwo was when the District Commissioner, Albeit, declared there is a change in the justice system for Umuofia, “We have brought a peaceful administration to you and your people… where we… administer justice… under a great queen.” (Achebe, 194) According to him, civilization under the British queen has arrived and is going to change their way of life. This also displays how justice is in the eye of the beholder. Albeit believed that justice could only be served under British rule, while the Igbo people believed their own system was just. It was Okonkwo’s humiliation from the white men and clan’s lack of action that determined the only way to refuse the reform of the foreigners, is to end his life.

In the end, Okonkwo’s rigid view of justice is what brought the demise of him and his clan. He took action on what he believed was right, but his lack of empathy and hypocrisy pushed people away from the foreigners. How can you blame Okonkwo when as said by Achebe, “The world has no end, and what is good among one people is an abomination with others.”