The Genre of “Black Panther” is Fantasy 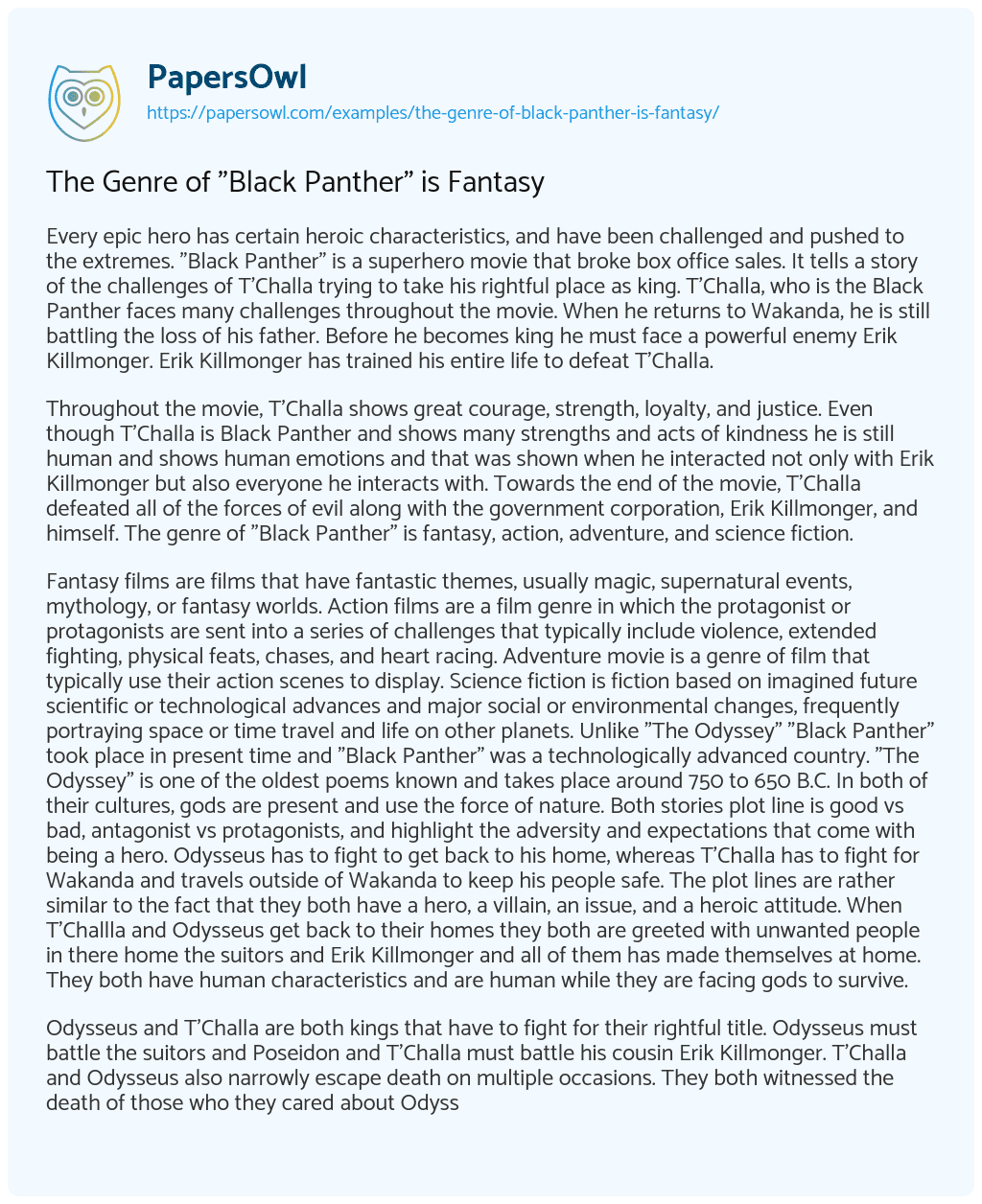 Every epic hero has certain heroic characteristics, and have been challenged and pushed to the extremes. “Black Panther” is a superhero movie that broke box office sales. It tells a story of the challenges of T’Challa trying to take his rightful place as king. T’Challa, who is the Black Panther faces many challenges throughout the movie. When he returns to Wakanda, he is still battling the loss of his father. Before he becomes king he must face a powerful enemy Erik Killmonger. Erik Killmonger has trained his entire life to defeat T’Challa.

Throughout the movie, T’Challa shows great courage, strength, loyalty, and justice. Even though T’Challa is Black Panther and shows many strengths and acts of kindness he is still human and shows human emotions and that was shown when he interacted not only with Erik Killmonger but also everyone he interacts with. Towards the end of the movie, T’Challa defeated all of the forces of evil along with the government corporation, Erik Killmonger, and himself. The genre of “Black Panther” is fantasy, action, adventure, and science fiction.

Fantasy films are films that have fantastic themes, usually magic, supernatural events, mythology, or fantasy worlds. Action films are a film genre in which the protagonist or protagonists are sent into a series of challenges that typically include violence, extended fighting, physical feats, chases, and heart racing. Adventure movie is a genre of film that typically use their action scenes to display. Science fiction is fiction based on imagined future scientific or technological advances and major social or environmental changes, frequently portraying space or time travel and life on other planets. Unlike “The Odyssey” “Black Panther” took place in present time and “Black Panther” was a technologically advanced country. “The Odyssey” is one of the oldest poems known and takes place around 750 to 650 B.C. In both of their cultures, gods are present and use the force of nature. Both stories plot line is good vs bad, antagonist vs protagonists, and highlight the adversity and expectations that come with being a hero. Odysseus has to fight to get back to his home, whereas T’Challa has to fight for Wakanda and travels outside of Wakanda to keep his people safe. The plot lines are rather similar to the fact that they both have a hero, a villain, an issue, and a heroic attitude. When T’Challla and Odysseus get back to their homes they both are greeted with unwanted people in there home the suitors and Erik Killmonger and all of them has made themselves at home. They both have human characteristics and are human while they are facing gods to survive.

The Genre of "Black Panther" is Fantasy. (2020, Feb 23). Retrieved from https://papersowl.com/examples/the-genre-of-black-panther-is-fantasy/

“Black Panther” is One of the Unique Movies