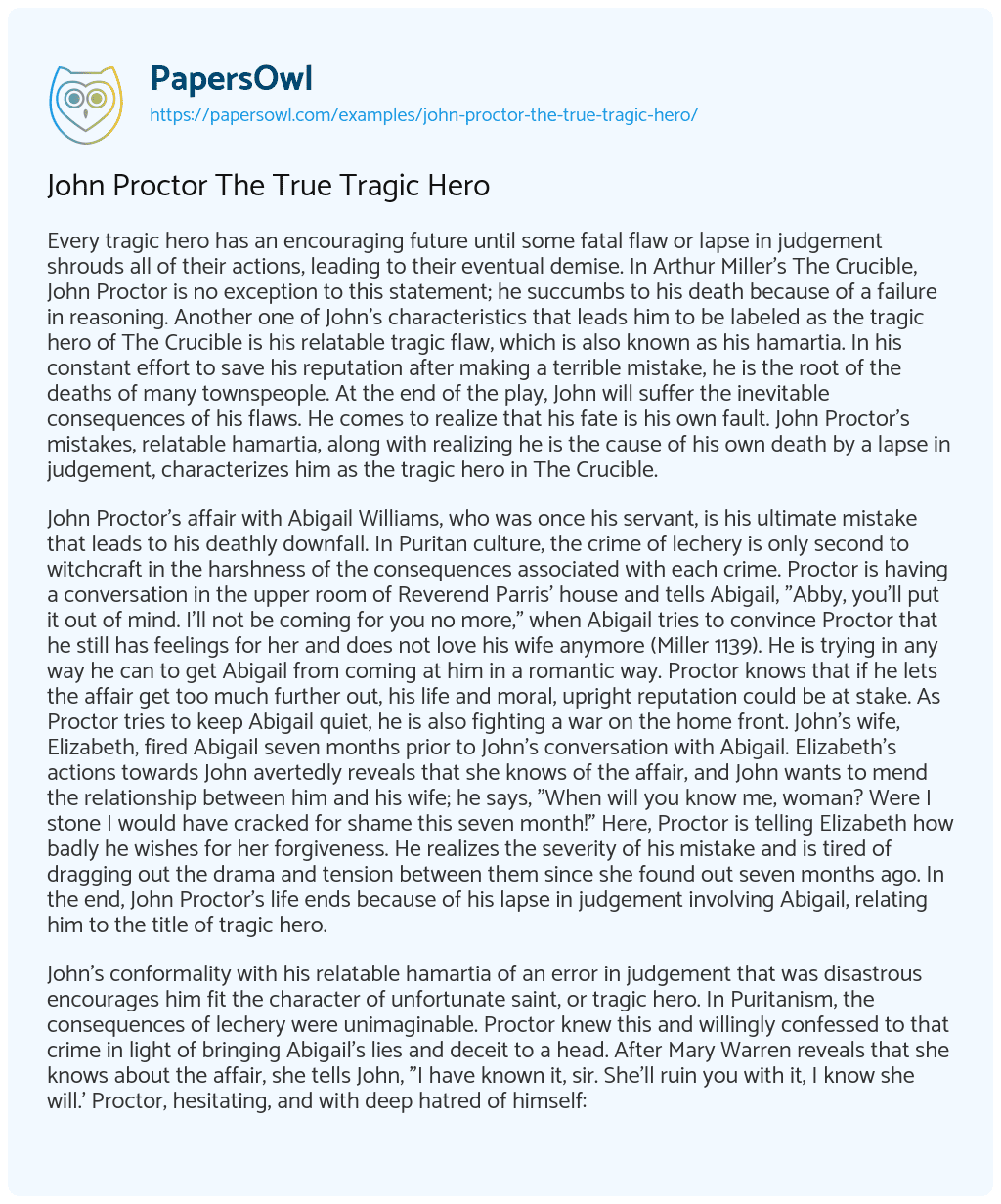 Every tragic hero has an encouraging future until some fatal flaw or lapse in judgement shrouds all of their actions, leading to their eventual demise. In Arthur Miller’s The Crucible, John Proctor is no exception to this statement; he succumbs to his death because of a failure in reasoning. Another one of John’s characteristics that leads him to be labeled as the tragic hero of The Crucible is his relatable tragic flaw, which is also known as his hamartia. In his constant effort to save his reputation after making a terrible mistake, he is the root of the deaths of many townspeople. At the end of the play, John will suffer the inevitable consequences of his flaws. He comes to realize that his fate is his own fault. John Proctor’s mistakes, relatable hamartia, along with realizing he is the cause of his own death by a lapse in judgement, characterizes him as the tragic hero in The Crucible.

John Proctor’s affair with Abigail Williams, who was once his servant, is his ultimate mistake that leads to his deathly downfall. In Puritan culture, the crime of lechery is only second to witchcraft in the harshness of the consequences associated with each crime. Proctor is having a conversation in the upper room of Reverend Parris’ house and tells Abigail, “Abby, you’ll put it out of mind. I’ll not be coming for you no more,” when Abigail tries to convince Proctor that he still has feelings for her and does not love his wife anymore (Miller 1139). He is trying in any way he can to get Abigail from coming at him in a romantic way. Proctor knows that if he lets the affair get too much further out, his life and moral, upright reputation could be at stake. As Proctor tries to keep Abigail quiet, he is also fighting a war on the home front. John’s wife, Elizabeth, fired Abigail seven months prior to John’s conversation with Abigail. Elizabeth’s actions towards John avertedly reveals that she knows of the affair, and John wants to mend the relationship between him and his wife; he says, “When will you know me, woman? Were I stone I would have cracked for shame this seven month!” Here, Proctor is telling Elizabeth how badly he wishes for her forgiveness. He realizes the severity of his mistake and is tired of dragging out the drama and tension between them since she found out seven months ago. In the end, John Proctor’s life ends because of his lapse in judgement involving Abigail, relating him to the title of tragic hero.

John’s conformality with his relatable hamartia of an error in judgement that was disastrous encourages him fit the character of unfortunate saint, or tragic hero. In Puritanism, the consequences of lechery were unimaginable. Proctor knew this and willingly confessed to that crime in light of bringing Abigail’s lies and deceit to a head. After Mary Warren reveals that she knows about the affair, she tells John, “I have known it, sir. She’ll ruin you with it, I know she will.’ Proctor, hesitating, and with deep hatred of himself: ‘Good. Then her saintliness is done with'” (Miller 1181). Even after Mary Warren reminds Proctor that Abigail will ‘ruin him with it,’ Proctor still wants to bring to light Abigail’s pretense. He knows he messed up, and he is willing to take the blame to save countless people from being hung. Later in the play, John Proctor is talking to Francis Nurse. In order to prove that he is telling the truth, Proctor tells Francis Nurse, “A man will not cast away his good name” (Miller 1206). Proctor explains to Francis Nurse that he is being legitimate about his accusation under the reasoning that he wouldn’t throw his good name away over a lie. He knows and understands that his fall occurs because of his actions. John Proctor is obviously described as the tragic hero in The Crucible on account of his consciousness of his hamartia.

The definitive reason for John’s passing was his failure to comprehend the issues at hand when they occurred. He did not comprehend the gravity of his actions or how they would affect his future when he committed the sin of lechery. Elizabeth and John converse in Act II about John going to Salem and being alone with Abigail; John admits to Elizabeth that he cheated on her when he says, “But I wilted, and like a Christian, I confessed” (Miller 1164). Here, Proctor is pleading with Elizabeth for her forgiveness and is telling her how sorry he is for what he did to her. He also reveals his knowledge of what he did, but it was not until after the fact that he really realized what he had done. Later, when John ends up confessing to Judge Danforth, the head judge in the witchcraft trials, he states, “I have known her, sir, I have known her” (Miller 1206). In this line, Proctor is confessing to his sin of lechery. It is here that Proctor gives up his life and reputation. John knows his inability to understand his troubling issues is a complete purpose behind his passing, further characterizing him as a tragic hero.

When John Proctor commits the sin of lechery, he commits the action that will ultimately lead to his demise. Proctor knew this after the fact and willingly confessed to that crime in order to bring Abigail’s lies and deceit forward. Even after Mary Warren reminds Proctor that Abigail will ‘ruin him with it,’ Proctor still wants to bring to light Abigail’s subterfuge. The ultimate reason for John’s passing was his inability to grasp the issues at hand when they arose. He did not comprehend the enormity of his actions or how they would affect his future when he committed the sin of lechery, making him the tragic hero in Arthur Miller’s The Crucible.