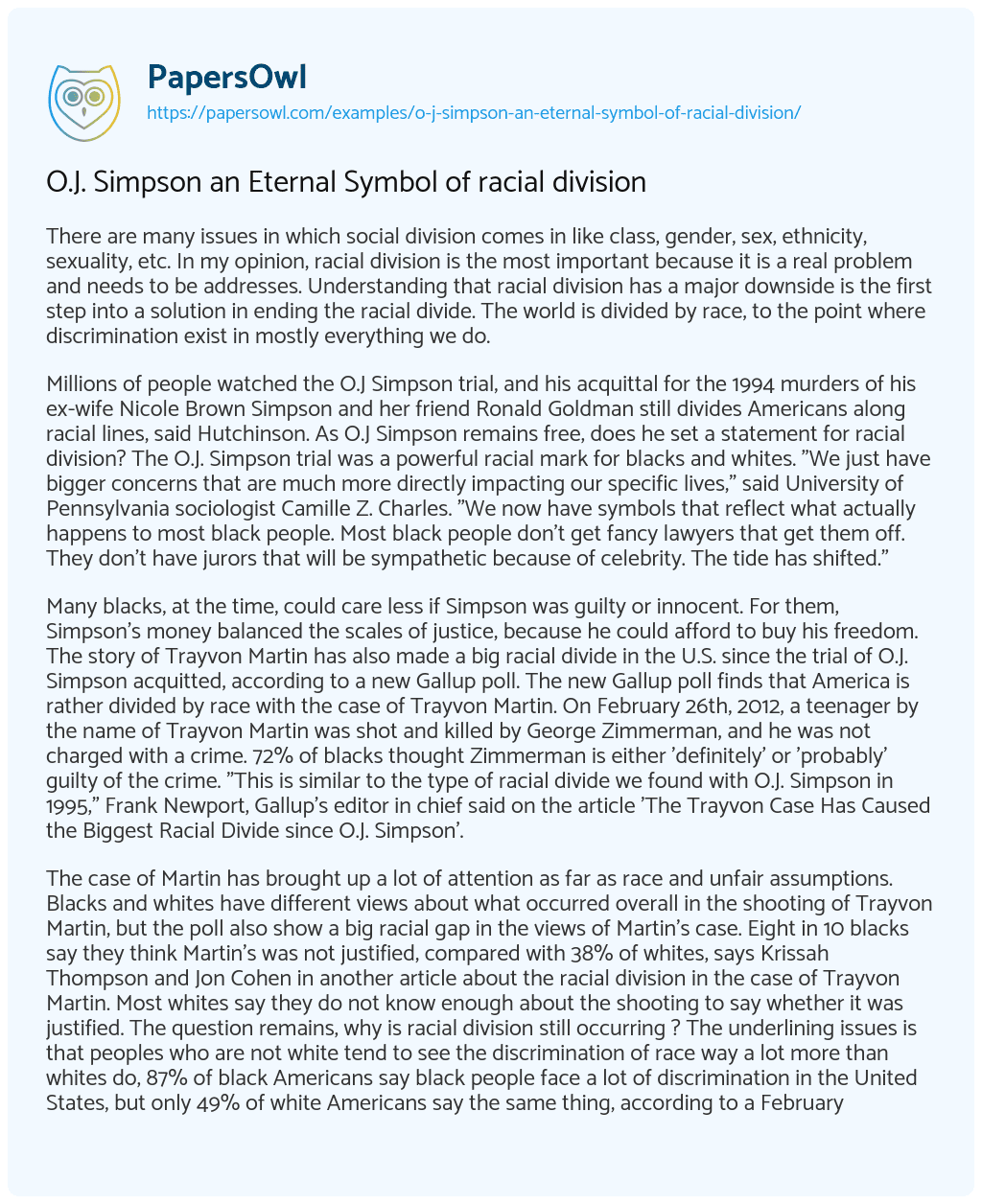 There are many issues in which social division comes in like class, gender, sex, ethnicity, sexuality, etc. In my opinion, racial division is the most important because it is a real problem and needs to be addresses. Understanding that racial division has a major downside is the first step into a solution in ending the racial divide. The world is divided by race, to the point where discrimination exist in mostly everything we do.

Millions of people watched the O.J Simpson trial, and his acquittal for the 1994 murders of his ex-wife Nicole Brown Simpson and her friend Ronald Goldman still divides Americans along racial lines, said Hutchinson. As O.J Simpson remains free, does he set a statement for racial division? The O.J. Simpson trial was a powerful racial mark for blacks and whites. “We just have bigger concerns that are much more directly impacting our specific lives,” said University of Pennsylvania sociologist Camille Z. Charles. “We now have symbols that reflect what actually happens to most black people. Most black people don’t get fancy lawyers that get them off. They don’t have jurors that will be sympathetic because of celebrity. The tide has shifted.”

Many blacks, at the time, could care less if Simpson was guilty or innocent. For them, Simpson’s money balanced the scales of justice, because he could afford to buy his freedom. The story of Trayvon Martin has also made a big racial divide in the U.S. since the trial of O.J. Simpson acquitted, according to a new Gallup poll. The new Gallup poll finds that America is rather divided by race with the case of Trayvon Martin. On February 26th, 2012, a teenager by the name of Trayvon Martin was shot and killed by George Zimmerman, and he was not charged with a crime. 72% of blacks thought Zimmerman is either ‘definitely’ or ‘probably’ guilty of the crime. “This is similar to the type of racial divide we found with O.J. Simpson in 1995,” Frank Newport, Gallup’s editor in chief said on the article ‘The Trayvon Case Has Caused the Biggest Racial Divide since O.J. Simpson’.

The case of Martin has brought up a lot of attention as far as race and unfair assumptions. Blacks and whites have different views about what occurred overall in the shooting of Trayvon Martin, but the poll also show a big racial gap in the views of Martin’s case. Eight in 10 blacks say they think Martin’s was not justified, compared with 38% of whites, says Krissah Thompson and Jon Cohen in another article about the racial division in the case of Trayvon Martin. Most whites say they do not know enough about the shooting to say whether it was justified. The question remains, why is racial division still occurring ? The underlining issues is that peoples who are not white tend to see the discrimination of race way a lot more than whites do, 87% of black Americans say black people face a lot of discrimination in the United States, but only 49% of white Americans say the same thing, according to a February poll from the Public Religion Research Institute. How can we, Americans, solve/put an end to racial division ?

Acknowledging that racial division IS an issue in our society is the first step into “making America great again”. Some solutions should be thought about the the behavior of people, including their motivation and capability to influence others, and not be restricted to any efforts to increase knowledge and awareness, and the aspiration to end racial issues and division. Racial division/ discrimination and equality continues to be an issue in America, regardless of any other social division, the only thing that matters is MONEY. They are a lot of things that will proceed to divide America, but can Americans come together to talk about how we can make life better and This isn’t to suggest that greater awareness is some sort of magical fix.

However, “de-racialzing” America’s deep-seated narratives would allow beneficial policies to move forward in small but crucial ways. After all, race is inextricably linked to our identity as Americans. Understanding that it has come with disadvantages for many people is essential to bridging the racial divide. Americans have social division over class, gender, and religion, but race has been the greatest barrier. And for blacks, racial equality remains a targeted, everyday goal. Learn to understand and appreciate one another !!

The People of the State of California V. Orenthal James Simpson

O.J Simpson and the Crime Scene