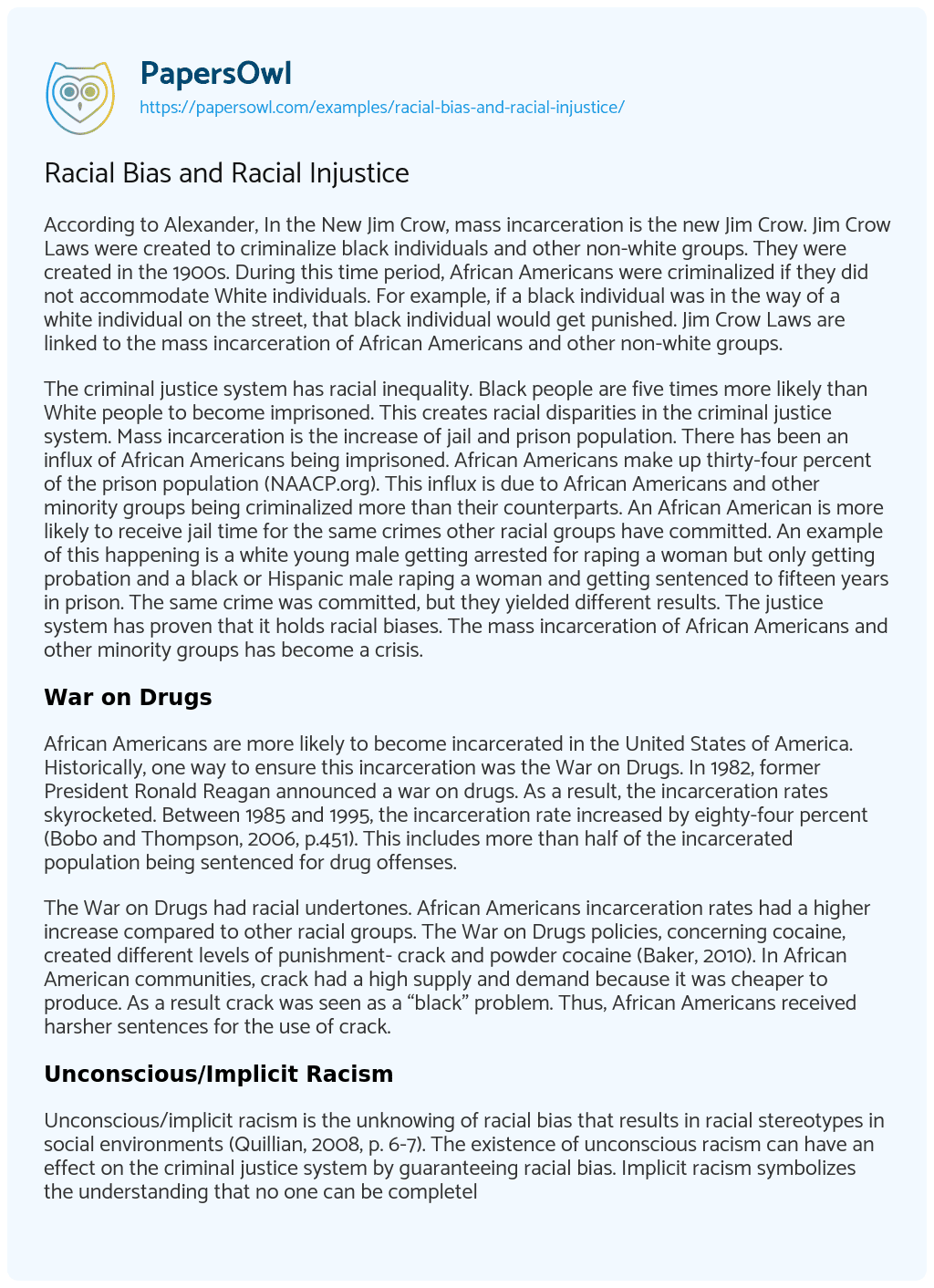 The criminal justice system has racial inequality. Black people are five times more likely than White people to become imprisoned. This creates racial disparities in the criminal justice system. Mass incarceration is the increase of jail and prison population. There has been an influx of African Americans being imprisoned. African Americans make up thirty-four percent of the prison population (NAACP.org). This influx is due to African Americans and other minority groups being criminalized more than their counterparts. An African American is more likely to receive jail time for the same crimes other racial groups have committed. An example of this happening is a white young male getting arrested for raping a woman but only getting probation and a black or Hispanic male raping a woman and getting sentenced to fifteen years in prison. The same crime was committed, but they yielded different results. The justice system has proven that it holds racial biases. The mass incarceration of African Americans and other minority groups has become a crisis.

Unconscious/implicit racism is the unknowing of racial bias that results in racial stereotypes in social environments (Quillian, 2008, p. 6-7). The existence of unconscious racism can have an effect on the criminal justice system by guaranteeing racial bias. Implicit racism symbolizes the understanding that no one can be completely unbiased. As stated in the definition, it’s unknowing. A person can be completely unaware that he or she holds biases towards certain races. If this is the case, racial neutrality cannot be achieved because it is not guaranteed.

Since racism can be implicit, racial bias can create racial disparities, especially, in the criminal justice system. The responsibility of treating every individual equally, regarding the law, can be misguided when there is bias. With this, racial justice is jeopardized.

The statement of “innocence until proven guilty” is just a statement when it comes to certain races. It is no secret that true justice is served depending on what race a person is. Throughout history, this has been the case. In 1855, an African American women named Celia, who was nineteen at the time, was convicted of murder, Celia’s slave master was trying to rape her. She felt like she was in danger, and in Missouri, during that time, women could use force if she is in imminent danger in sexual intercourse (Equal Justice Initiative). Instead of the criminal justice helping Celia, it abandoned her and made her the criminal. There was no justice because Celia was black slave.

Driving is a Crime- Racial Profiling

During the 1900s, the Department of Justice and United States law enforcement officers were trained to use drug profiles based on race to make arrests. Race became a justifiable suspicion when “Driving While Black” became a social phenomenon. “Driving While Black” is a racially biased technic to stop African American drivers. African Americans are more likely to have their vehicles searched. They are also more likely to receive tickets. Racial profiling is discriminatory on the criminal justice system’s behalf.

“Racial profiling is based on the premise that most drug offenses are committed by minorities” (Harris, 1999). Law enforcement officers are looking for African Americans and Latinos to have drugs on them when they are stopped. Minorities are more likely to have their cars searched. In 1986, the DEA launched “Operation Pipeline.” This program trained thousands of police officers to use pretext to stop certain vehicles (Harris, 1999). This encouraged the target of minorities.

“Driving While Black” is the very example of police officers using their authority to target minorities off of racial bias and not for breaking the law. Research has proven that searching African American drivers undering the suspicion of being drug couriers produce any more arrest than other randoms searches (Brown and Jantzi). Racial profiling proves there is racial bias. “Driving While Black” is one step further from achieving racial neutrality.

It’s Not What It Seems- Stereotypes

Stereotypes are generalized beliefs that are generally negative. They can be seen as the truth because they are glorified by the media. This glorified presence can allow the criminal justice system to become impacted due to discriminations made from stereotypes. Therefore, stereotypes influences racial bias. Minorities experience more suspension and disciplinary action than any other race due to preconceived notions, opinions, and judgements.

African Americans are more likely to be described as angry and aggressive than Caucasians. This is shown through police officers using excessive force when interacting with African Americans because he police officers feel threatened. This was the case for Trayvon MArtin. George Zimmerman was not a police officer, but he had some kind of authority by being neighborhood watch. Zimmerman felt threatened by Trayvon Martin’s presence. As a result, Trayvon Martin was killed. George Zimmerman was not found guilty because of Florida’s Stand Your Ground law. Trayvon Martin was walking back from the store while holding a drink and a pack of candy. MAny believe that because Martin was Black he was already stereotyped as dangerous and aggressive. This stereotype and racial bias is what killed Trayvon Martin. Stereotypes can also criminalize African Americans. This concept is known as black criminality.

It’s A Crime To Be Black

The Racial Injustice Existed in our Judicial System