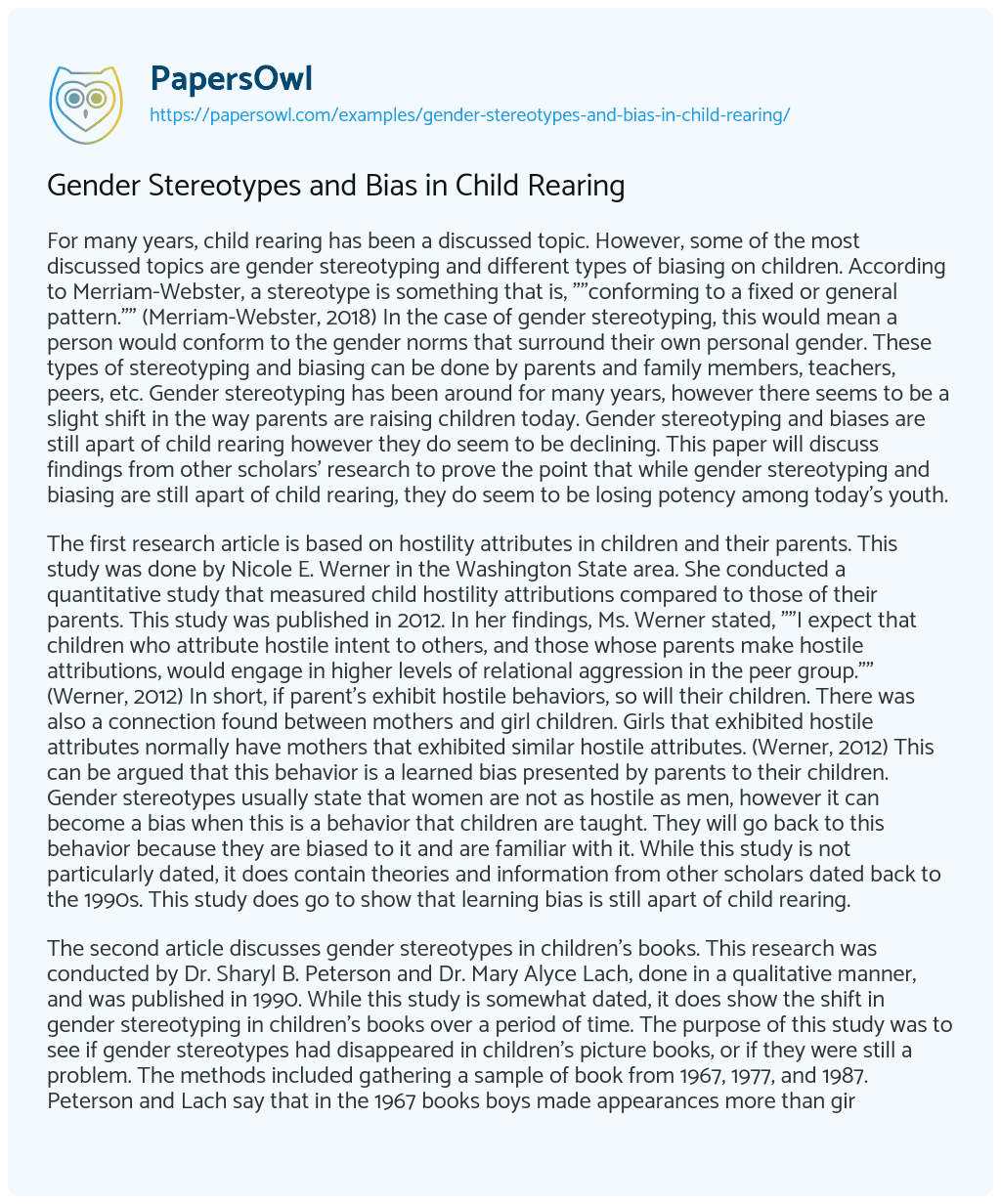 The first research article is based on hostility attributes in children and their parents. This study was done by Nicole E. Werner in the Washington State area. She conducted a quantitative study that measured child hostility attributions compared to those of their parents. This study was published in 2012. In her findings, Ms. Werner stated, “”I expect that children who attribute hostile intent to others, and those whose parents make hostile attributions, would engage in higher levels of relational aggression in the peer group.”” (Werner, 2012) In short, if parent’s exhibit hostile behaviors, so will their children. There was also a connection found between mothers and girl children. Girls that exhibited hostile attributes normally have mothers that exhibited similar hostile attributes. (Werner, 2012) This can be argued that this behavior is a learned bias presented by parents to their children. Gender stereotypes usually state that women are not as hostile as men, however it can become a bias when this is a behavior that children are taught. They will go back to this behavior because they are biased to it and are familiar with it. While this study is not particularly dated, it does contain theories and information from other scholars dated back to the 1990s. This study does go to show that learning bias is still apart of child rearing.

In the fourth article, it discusses gender differences in parental wishes for their children’s future. This research was conducted by Brittany M. Wittenberg, Lauren Beverung, Arya Ansari, Deborah Jacobvitz, and Nancy Hazen, and it was published in 2017. This was a quantitative study that consisted of 126 couples ranging from ages 16 to 50. The couples in this study were pregnant and expecting children. When asked about wishes for their children, everybody answered closely. The researchers categorized answers in the following categories: well-being, particular characteristics, particular goals, protection, person achievement and responsibility, dependence on the parent, and personal fulfillment. Not surprisingly, all parents answered with well wishes in all of these categories for their children. However, the researchers did find that some answers were influenced by gender role stereotypes. For example, mothers were more likely to wish for well-being and personal fulfillment while fathers more likely wished for value achievement and independence, which includes goal achievement and personal responsibility. (Wittenberg, Beverung, Ansari, Jacobvitz, and Hazen, 2017) They also concluded that the only responses that didn’t have a gender influence were wishes for parent dependence and the child’s personal relationships. In conclusion to their results, they found that preconceived notions of gender roles and stereotypes can have an effect on the prenatal wishes that parents have for their children. (Wittenberg, Beverung, Ansari, Jacobvitz, and Hazen, 2017) These findings fit the thesis of this paper almost perfectly. This study is very much up to date about childrearing, and it does show that gender role stereotypes have taken a turn when discussing the wishes for children. Granted, the stereotypes are still there, however they seem to not be as pronounced as they once were.

In the fifth and final article, language towards children is discussed. This article is written by Dr. Tasha E. Bluiett, and it was published in September 2018. Bluiett makes the case than children learn from a very early age their gender roles and identities. As early as preschool, children make gender role-based choices such as which toys to play with, what clothes to wear, etc. (Bluiett, 2018) According to Bluiett, children learn these choice making tendencies and ways of speaking from parents, media, and peers. It is almost like a domino effect. Children learn these gender stereotype ways of speaking, and they practice it on each other. Bluiett uses an example stating that little girls were pretend playing a wedding. When one asked if another male classmate could participate, one girl said no because the game was for girls only. (Bluiett, 2018) Sadly, until a change is made all around, gender role stereotypes will still continue to be a problem. This article is relevant to this topic because it shows that gender role stereotypes are still a learned behavior to children.

In conclusion, gender roles, stereotypes, and biases are declining in child rearing. They are still there, but the shift to more gender neutral children rearing has started. The shift and change can only prove to be a positive change for children and our society. It will be positive because with less gender norms, children can truly be anything they want to be without fear from parents, family, or society. While it is very difficult to raise gender neutral children, we can only hope this trend continues. With new research, society changes and changes in child rearing will prove if it will continue.