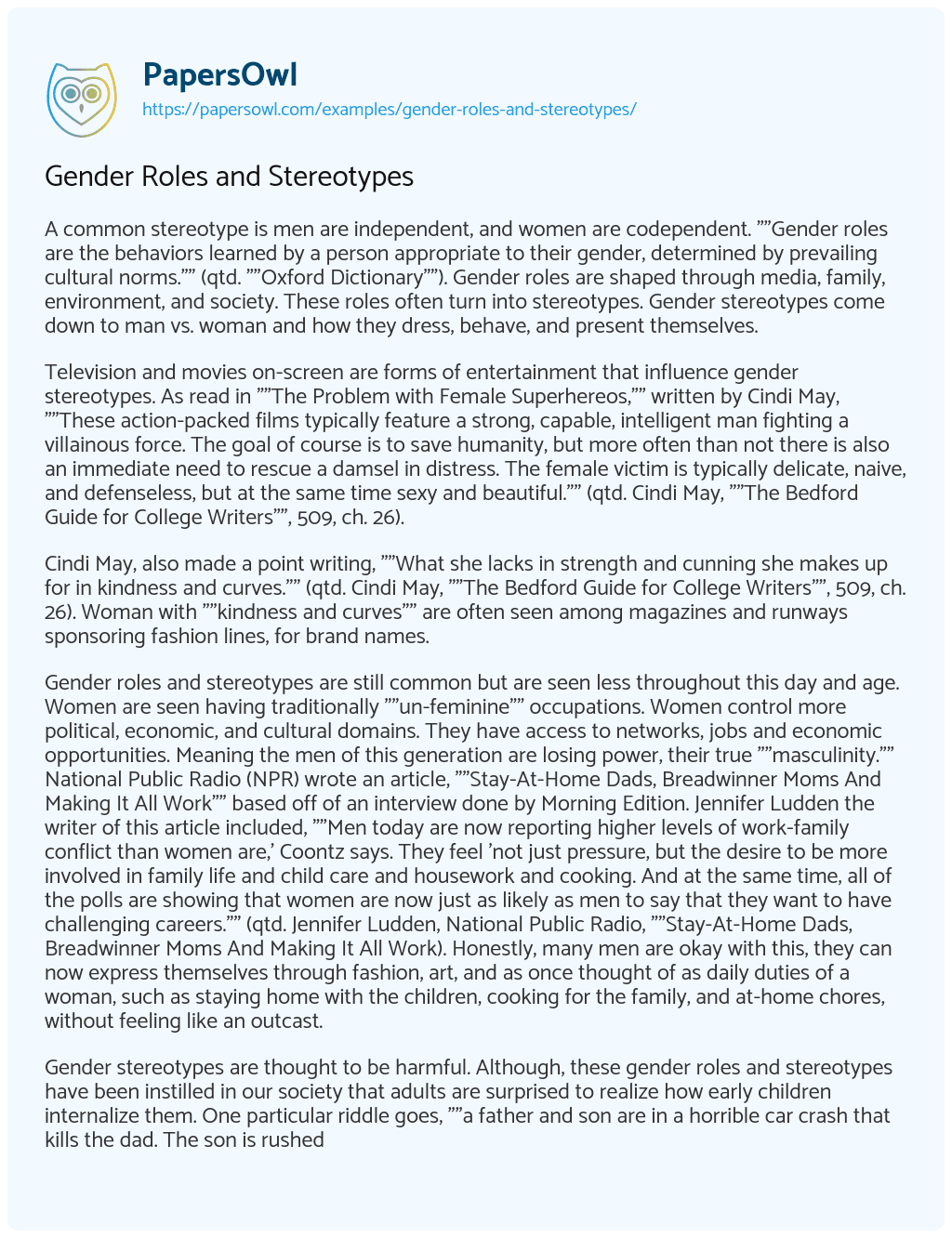 A common stereotype is men are independent, and women are codependent. “”Gender roles are the behaviors learned by a person appropriate to their gender, determined by prevailing cultural norms.”” (qtd. “”Oxford Dictionary””). Gender roles are shaped through media, family, environment, and society. These roles often turn into stereotypes. Gender stereotypes come down to man vs. woman and how they dress, behave, and present themselves.

Television and movies on-screen are forms of entertainment that influence gender stereotypes. As read in “”The Problem with Female Superhereos,”” written by Cindi May, “”These action-packed films typically feature a strong, capable, intelligent man fighting a villainous force. The goal of course is to save humanity, but more often than not there is also an immediate need to rescue a damsel in distress. The female victim is typically delicate, naive, and defenseless, but at the same time sexy and beautiful.”” (qtd. Cindi May, “”The Bedford Guide for College Writers””, 509, ch. 26).

Cindi May, also made a point writing, “”What she lacks in strength and cunning she makes up for in kindness and curves.”” (qtd. Cindi May, “”The Bedford Guide for College Writers””, 509, ch. 26). Woman with “”kindness and curves”” are often seen among magazines and runways sponsoring fashion lines, for brand names.

Gender roles and stereotypes are still common but are seen less throughout this day and age. Women are seen having traditionally “”un-feminine”” occupations. Women control more political, economic, and cultural domains. They have access to networks, jobs and economic opportunities. Meaning the men of this generation are losing power, their true “”masculinity.”” National Public Radio (NPR) wrote an article, “”Stay-At-Home Dads, Breadwinner Moms And Making It All Work”” based off of an interview done by Morning Edition. Jennifer Ludden the writer of this article included, “”Men today are now reporting higher levels of work-family conflict than women are,’ Coontz says. They feel ‘not just pressure, but the desire to be more involved in family life and child care and housework and cooking. And at the same time, all of the polls are showing that women are now just as likely as men to say that they want to have challenging careers.”” (qtd. Jennifer Ludden, National Public Radio, “”Stay-At-Home Dads, Breadwinner Moms And Making It All Work). Honestly, many men are okay with this, they can now express themselves through fashion, art, and as once thought of as daily duties of a woman, such as staying home with the children, cooking for the family, and at-home chores, without feeling like an outcast.

Gender stereotypes are thought to be harmful. Although, these gender roles and stereotypes have been instilled in our society that adults are surprised to realize how early children internalize them. One particular riddle goes, “”a father and son are in a horrible car crash that kills the dad. The son is rushed to the hospital; just as he’s about to go under the knife, the surgeon says, “”I can’t operate- that boy is my son!”” BU Today, posted an article written by Rich Barlow that explained how this riddle “”reveals the depth of gender bias.”” Barlow wrote “”If you guessed that the surgeon is the boy’s gay, second father, you get a point for enlightenment, at least outside the Bible Belt. But did you also guess the surgeon could be the boy’s mother? If not, you’re part of a surprising majority.”” (qtd. Rich Barlow, “”BU Research: A Riddle Reveals Depth of Gender Bias””, BU Today). For every person who assumed the surgeon was a male, it proves that gender stereotypes are still commonly thought about today. But, as time progresses, people often feel they shouldn’t conform to the socially defined gender roles.