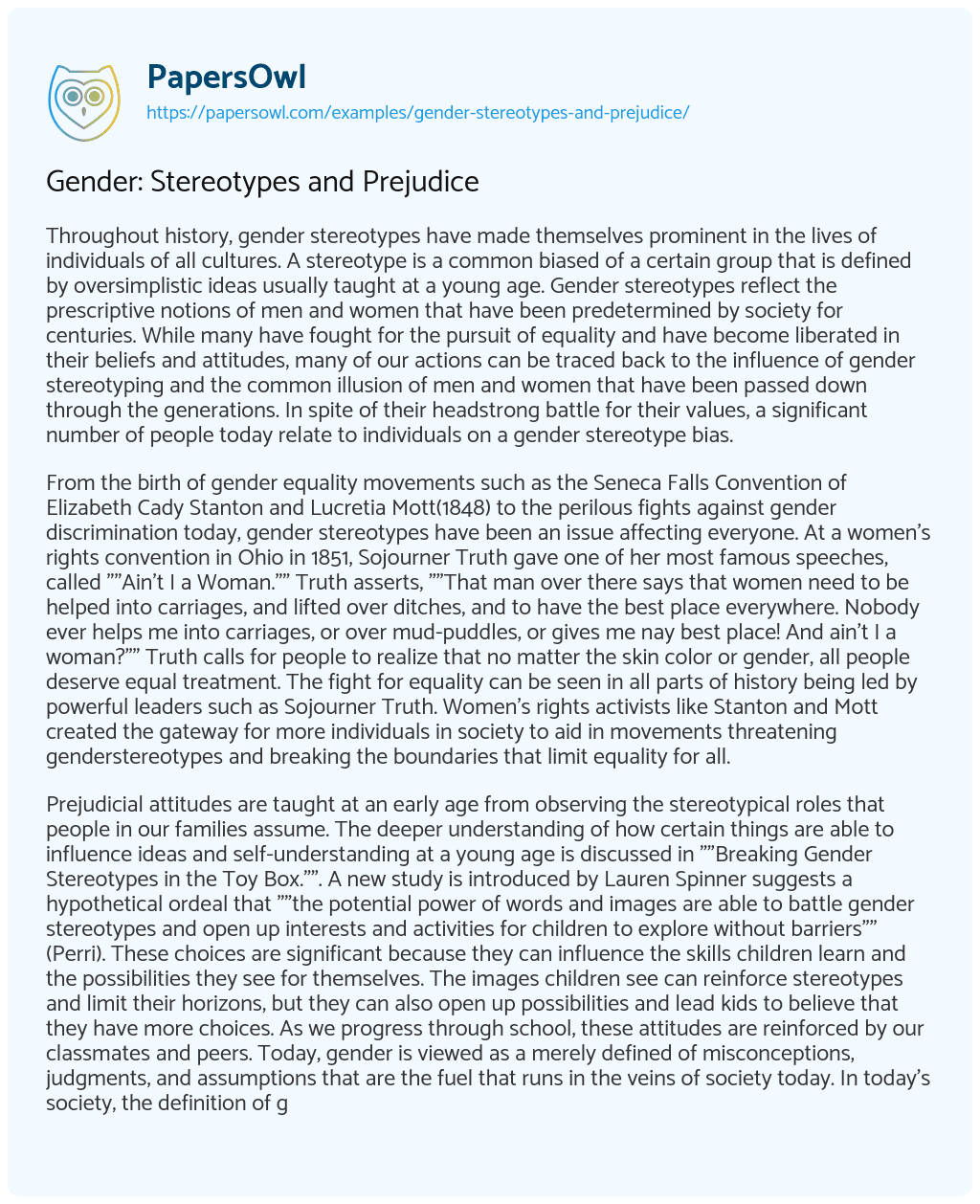 Throughout history, gender stereotypes have made themselves prominent in the lives of individuals of all cultures. A stereotype is a common biased of a certain group that is defined by oversimplistic ideas usually taught at a young age. Gender stereotypes reflect the prescriptive notions of men and women that have been predetermined by society for centuries. While many have fought for the pursuit of equality and have become liberated in their beliefs and attitudes, many of our actions can be traced back to the influence of gender stereotyping and the common illusion of men and women that have been passed down through the generations. In spite of their headstrong battle for their values, a significant number of people today relate to individuals on a gender stereotype bias.

From the birth of gender equality movements such as the Seneca Falls Convention of Elizabeth Cady Stanton and Lucretia Mott(1848) to the perilous fights against gender discrimination today, gender stereotypes have been an issue affecting everyone. At a women’s rights convention in Ohio in 1851, Sojourner Truth gave one of her most famous speeches, called “”Ain’t I a Woman.”” Truth asserts, “”That man over there says that women need to be helped into carriages, and lifted over ditches, and to have the best place everywhere. Nobody ever helps me into carriages, or over mud-puddles, or gives me nay best place! And ain’t I a woman?”” Truth calls for people to realize that no matter the skin color or gender, all people deserve equal treatment. The fight for equality can be seen in all parts of history being led by powerful leaders such as Sojourner Truth. Women’s rights activists like Stanton and Mott created the gateway for more individuals in society to aid in movements threatening genderstereotypes and breaking the boundaries that limit equality for all.

Prejudicial attitudes are taught at an early age from observing the stereotypical roles that people in our families assume. The deeper understanding of how certain things are able to influence ideas and self-understanding at a young age is discussed in “”Breaking Gender Stereotypes in the Toy Box.””. A new study is introduced by Lauren Spinner suggests a hypothetical ordeal that “”the potential power of words and images are able to battle gender stereotypes and open up interests and activities for children to explore without barriers”” (Perri). These choices are significant because they can influence the skills children learn and the possibilities they see for themselves. The images children see can reinforce stereotypes and limit their horizons, but they can also open up possibilities and lead kids to believe that they have more choices. As we progress through school, these attitudes are reinforced by our classmates and peers. Today, gender is viewed as a merely defined of misconceptions, judgments, and assumptions that are the fuel that runs in the veins of society today. In today’s society, the definition of gender is everchanging.

Despite the various roles played by men and women in today’s society, people are still prone to judge individuals based on their idea of how males and females are expected to behave. Articles such as “”Gender Stereotypes””elaborate on the idea that preconceived ways of life where the sexes are assigned characteristics and roles that are determined and limited by their gender. Eige explains that Gender stereotyping “”limits the development of the natural talents and abilities of women and men””(Eige). Stereotypes about women both result from and are the cause of, deeply ingrained attitudes, values, norms and prejudices against women (Eige).

Gender Stereotypes against Women and Men

Gender Stereotypes and their Effect on People