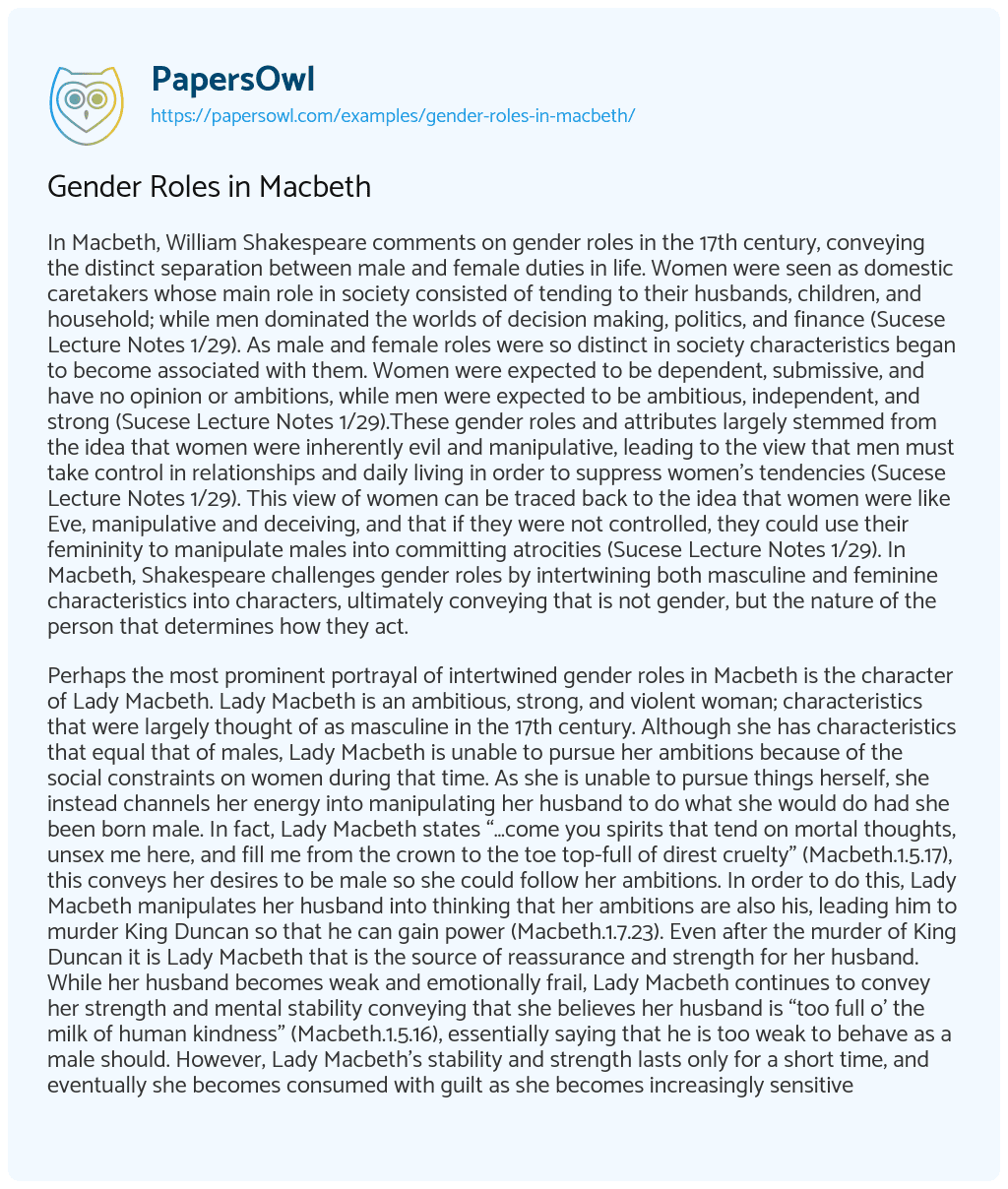 In Macbeth, William Shakespeare comments on gender roles in the 17th century, conveying the distinct separation between male and female duties in life. Women were seen as domestic caretakers whose main role in society consisted of tending to their husbands, children, and household; while men dominated the worlds of decision making, politics, and finance (Sucese Lecture Notes 1/29). As male and female roles were so distinct in society characteristics began to become associated with them. Women were expected to be dependent, submissive, and have no opinion or ambitions, while men were expected to be ambitious, independent, and strong (Sucese Lecture Notes 1/29).These gender roles and attributes largely stemmed from the idea that women were inherently evil and manipulative, leading to the view that men must take control in relationships and daily living in order to suppress women’s tendencies (Sucese Lecture Notes 1/29). This view of women can be traced back to the idea that women were like Eve, manipulative and deceiving, and that if they were not controlled, they could use their femininity to manipulate males into committing atrocities (Sucese Lecture Notes 1/29). In Macbeth, Shakespeare challenges gender roles by intertwining both masculine and feminine characteristics into characters, ultimately conveying that is not gender, but the nature of the person that determines how they act.

Perhaps the most prominent portrayal of intertwined gender roles in Macbeth is the character of Lady Macbeth. Lady Macbeth is an ambitious, strong, and violent woman; characteristics that were largely thought of as masculine in the 17th century. Although she has characteristics that equal that of males, Lady Macbeth is unable to pursue her ambitions because of the social constraints on women during that time. As she is unable to pursue things herself, she instead channels her energy into manipulating her husband to do what she would do had she been born male. In fact, Lady Macbeth states “…come you spirits that tend on mortal thoughts, unsex me here, and fill me from the crown to the toe top-full of direst cruelty” (Macbeth.1.5.17), this conveys her desires to be male so she could follow her ambitions. In order to do this, Lady Macbeth manipulates her husband into thinking that her ambitions are also his, leading him to murder King Duncan so that he can gain power (Macbeth.1.7.23). Even after the murder of King Duncan it is Lady Macbeth that is the source of reassurance and strength for her husband. While her husband becomes weak and emotionally frail, Lady Macbeth continues to convey her strength and mental stability conveying that she believes her husband is “too full o’ the milk of human kindness” (Macbeth.1.5.16), essentially saying that he is too weak to behave as a male should. However, Lady Macbeth’s stability and strength lasts only for a short time, and eventually she becomes consumed with guilt as she becomes increasingly sensitive (Macbeth.5.1.82.). This feminine characteristic of sensitivity eventually leads to the demise of Lady Macbeth, as she can no longer maintain the strength that she had before, ultimately leading to her suicide.

Through Lady Macbeth, Shakespeare conveys the idea that just because a woman is a woman, does not mean that they do not have the ambitions and strength of a man. He completely throws away the societal view of how women should act, and brings to light how women have the same capacity as men, and that they are able to be the source of opinions and ambitions in a relationship. This is shown in act one when Lady Macbeth challenges Macbeth to go through with the murder of King Duncan, saying to him, “but screw your courage to the sticking-place, / And we’ll not fail” (Macbeth.1.7.23).Through this quote it is clear that Lady Macbeth is the source of power, ambition, and strength in her relationship with Macbeth, propelling him to do what he thinks he cannot. Shakespeare also uses this quote to show how ambitious women use their femininity to persuade their male counterparts to take various actions. Lady Macbeth also essentially ridicules Macbeth, saying that her courage is steadfast even though she is a woman, and that he needs to have the same courage because he is man. The view of a women as both feminine and masculine was abnormal in a century so tightly bound to specific gender roles and female inferiority. In Macbeth, Shakespeare essentially puts all women on the same playing field as men.

Another prominent portrayal of male attributes in females is the three witches. Throughout the play, they tap into Macbeth’s inner desire for power and give him false security in his actions. Without the witches it is unlikely that Macbeth would have gone through with the murder of King Duncan, as it was their words that placed the thought in his mind and made him think that was his destiny (Macbeth.1.3.12). The Witches are the only characters in Macbeth that not only portray masculine and feminine characteristics inwardly but have physical characteristics that make it hard to outwardly define their gender. Although the witches are sisters, they have beards that cause characters in Macbeth to become confused with the ambiguity of their gender. This shown through Banquo’s first interaction with the Witches when he says, “You should be women, / And yet your beads forbid me to interpret / That you are so” (Macbeth.1.3.8). For the most part, the Witches words and actions can be seen as traditionally female, as they use manipulation in order to meddle with the minds of various characters, but they can also be seen as male because of the strength in their words and the respect that they command. The way in which they use words brings dark, unconscious thoughts to the surface for characters, which is specifically shown through Macbeth, as they bring to light his unconscious desire for power by hailing him as king (Macbeth.1.3.9.). Once these dark thoughts take a place in the characters minds, they are not easily displaced, starting a chain reaction of events that lead to the climax of the play.

Although Lady Macbeth and the Three Witches portray women with male attributes, there are characters in Macbeth that show the opposite – men with female attributes. The best example of this in Macbeth is Macbeth. In the play, Shakespeare uses Macbeth to convey what happens to men when they take on female characteristics while also emphasizing his point that gender is not inherent to character. In the beginning of the play, Macbeth shows a lack male attributes and instead expresses himself as weak and frail; characteristics that a female is supposed to have. He shows this through his anxieties and worries about killing King Duncan, and becomes very close to not committing the murder because of it (Macbeth.1.7.22.) However, in the end his wife persuades him to, which shows a further lack of strength in masculine attributes for Macbeth as it indicates lacks of courage. This is because males are not supposed to listen to the inferior opinion of women, and conveys that Macbeth is taking on a feminine role in his relationship with his wife. While Macbeth has his own ambitions of gaining power, it is his conscious that stops him from doing everything he can to attain it. Unlike Lady Macbeth who becomes increasingly frail as the play goes on, Macbeth becomes less emotional and more in tune to the violent, ambitious part of him that represents his masculinity. Shakespeare uses Macbeth in the same way he uses Lady Macbeth, which is to convey that gender does not determine character. Macbeth may be male, but he acts like a weak and emotionally frail women who needs support and validation from a more powerful figure in her life. The fact that Macbeth needed that validation and support from a female would have been embarrassing in the 16th century, and any normal male in that time period would have been ridiculed and labeled as a shell of a man.

In contrast to Macbeth, Malcom represent the epitome of manhood in the 17th century. While Macbeth tries to gain power by deception and murder, Malcom gains power by using his intelligence and fortitude. Not only that, but Malcom’s drive to attain power comes from within him, whereas Macbeth’s ambitions are driven by his wife. Malcom’s intelligence is shown specifically in his interactions with Macduff. He uses his wit to test the loyalty of Macduff by conveying that he is a greedy and overly ambitious man that would be a worse ruler than Macbeth. When Macduff shows his grief at these statements, Malcom decides to trust him and reveal his true nature (Macbeth.4.3.75.). Through this interaction, Malcom shows how he hopes to strengthen good within the Kingdom by ruling with virtue and restraint, instead of evil and desire. Shakespeare uses Malcom to show how a proper man and ruler should act by emphasizing the clear divide between the character of Malcom and Macbeth. He also conveys that if one acts with good intentions then the end result will always be better than if they had not.

Through his use of Macbeth, Lady Macbeth, The Witches, and Malcom, Shakespeare breaks down gender roles in in the 16th century while questioning the validity of them. He uses Lady Macbeth to portray how women do actually have the capability of men both professionally and mentally, but have to hide their ambitions due to social constraints. The Three Witches represent an ambiguity in gender and dark thoughts driven by the want for power. They use their words in a confusing yet reassuring manner that manipulates the characters but provides a sense of reassurance at the same time. Macbeth is used to portray that men have the capacity to be like women, while Malcolm is used as an example of how a proper man without female influence should act. Shakespeare’s use of Macbeth calls into question the unwarranted power that society gives the male gender just because they are male. Overall, Shakespeare uses various characters in Macbeth to raise questions about gender roles while conveying that the personality traits each character has is not linked to their gender, but instead to their inherent nature.