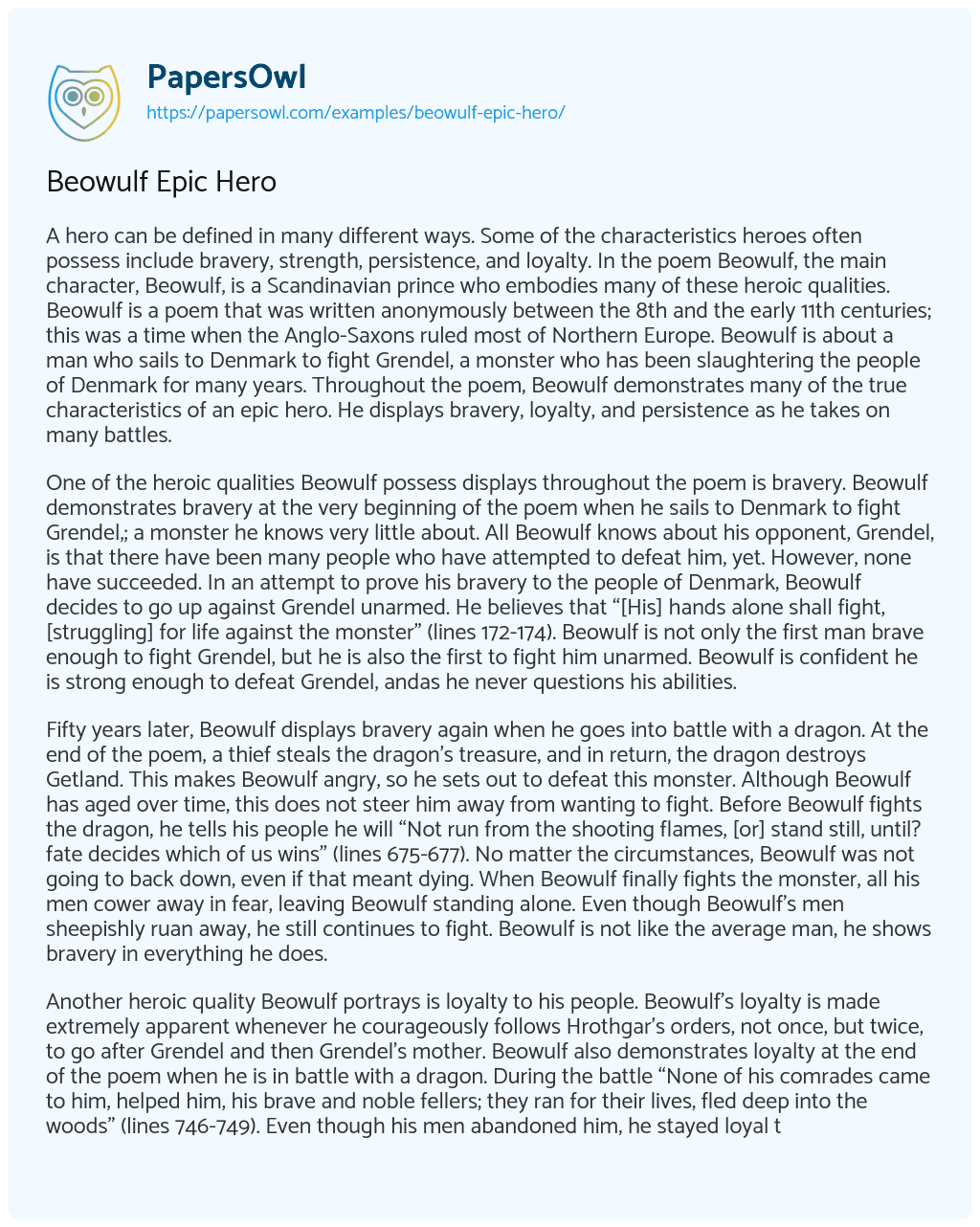 A hero can be defined in many different ways. Some of the characteristics heroes often possess include bravery, strength, persistence, and loyalty. In the poem Beowulf, the main character, Beowulf, is a Scandinavian prince who embodies many of these heroic qualities. Beowulf is a poem that was written anonymously between the 8th and the early 11th centuries; this was a time when the Anglo-Saxons ruled most of Northern Europe. Beowulf is about a man who sails to Denmark to fight Grendel, a monster who has been slaughtering the people of Denmark for many years. Throughout the poem, Beowulf demonstrates many of the true characteristics of an epic hero. He displays bravery, loyalty, and persistence as he takes on many battles.

One of the heroic qualities Beowulf possess displays throughout the poem is bravery. Beowulf demonstrates bravery at the very beginning of the poem when he sails to Denmark to fight Grendel,; a monster he knows very little about. All Beowulf knows about his opponent, Grendel, is that there have been many people who have attempted to defeat him, yet. However, none have succeeded. In an attempt to prove his bravery to the people of Denmark, Beowulf decides to go up against Grendel unarmed. He believes that “[His] hands alone shall fight, [struggling] for life against the monster” (lines 172-174). Beowulf is not only the first man brave enough to fight Grendel, but he is also the first to fight him unarmed. Beowulf is confident he is strong enough to defeat Grendel, andas he never questions his abilities.

Fifty years later, Beowulf displays bravery again when he goes into battle with a dragon. At the end of the poem, a thief steals the dragon’s treasure, and in return, the dragon destroys Getland. This makes Beowulf angry, so he sets out to defeat this monster. Although Beowulf has aged over time, this does not steer him away from wanting to fight. Before Beowulf fights the dragon, he tells his people he will “Not run from the shooting flames, [or] stand still, until? fate decides which of us wins” (lines 675-677). No matter the circumstances, Beowulf was not going to back down, even if that meant dying. When Beowulf finally fights the monster, all his men cower away in fear, leaving Beowulf standing alone. Even though Beowulf’s men sheepishly ruan away, he still continues to fight. Beowulf is not like the average man, he shows bravery in everything he does.

Another heroic quality Beowulf portrays is loyalty to his people. Beowulf’s loyalty is made extremely apparent whenever he courageously follows Hrothgar’s orders, not once, but twice, to go after Grendel and then Grendel’s mother. Beowulf also demonstrates loyalty at the end of the poem when he is in battle with a dragon. During the battle “None of his comrades came to him, helped him, his brave and noble fellers; they ran for their lives, fled deep into the woods” (lines 746-749). Even though his men abandoned him, he stayed loyal to them and continued to fight for their protection.

Beowulf knew he could die in battle, but he was willing to fight for the protection of his people no matter the outcome. Another time Beowulf shows loyalty to his people is when he is lying on his deathbed, facing the fact that he might not come back. Despite the fact that he is about to die, his main concern is still his men. As Beowulf is lying on the ground in pain, he asks Wiglaf to “lead his people, help them” (lines 808-809). Beowulf was on his last leg, and his only concern was the future of GeatlandDenmark. Once again, Beowulf differs from the average man, foras he sticks by his men untiltill the end, even though they abandoned him when he needed them the most.

Lastly, Beowulf portrays the qualities of an epic hero by the way he displays persistence throughout the poem. Beowulf’s’ persistence is the reason why he is so successful in his battles. Beowulf demonstrates this when he battles Grendel’s mom. In the battle with Grendel’s mother, Beowulf brings a man-made sword that was supposed to be unstoppable. Beowulf later figures out that the sword was of no use when he attempts to strike Grendel’s mom, and the sword phases her in no way. It was at the point that Beowulf realized that he had nothing but his hands to fight, but that did not stop him from him giving his all. “Beowulf [who] longed only for fame, leaped back into battle” and defeated the bloodthirsty monster (lines 606-607). From the beginning, Beowulf had one focus:, to protect the Geats and the Danes. Beowulf never eased up. Even at the end, when he is old and aged, he maintained his point of convergence to protect the people. In order to shield his people from the beasts, Beowulf took charge of his emotional distress; he never displayed any signs of fear or lack of self-confidence. Beowulf was perpetually confident, so much so that he believed he could alter fate through courage.

Another way Beowulf displays persistence is the way in which he battles Grendel. At the beginning of the poem, before Beowulf fights Grendel, many people start to question whether he will really be able to defeat Grendel. However, this doesn’t affect Beowulf in any way. He knew that his purpose “was to win the goodwill of [the] people or die in battle, pressed / In Grendel’s fierce grip” (lines 366-368). Beowulf knew that death was a possibilityit was a possibility he could die, but he was willing to fight to his death if that’s what it took. Beowulf demonstrates persistence in every battle he fights in, and without it, he would have never been a true epic hero.

Beowulf embodies a true epic hero throughout the entirety of the poem. This is made clear as he continues to demonstrate heroic qualities, despite the adversities he faces. He performed many acts of bravery and was persistent with every battle he faced, while also remaining loyal to his people. Normal men and women do not have the attributes that Anglo-Saxon heroes do, so they must rely on heroes, like Beowulf, to fight off oppression. Beowulf was willing to do anything for his men, and that’s what made him stand out amongst the others. Beowulf died for his people, and that does not only make him a hero in the Anglo-Saxon time period, but also today.