Gender Stereotypes against Women and Men 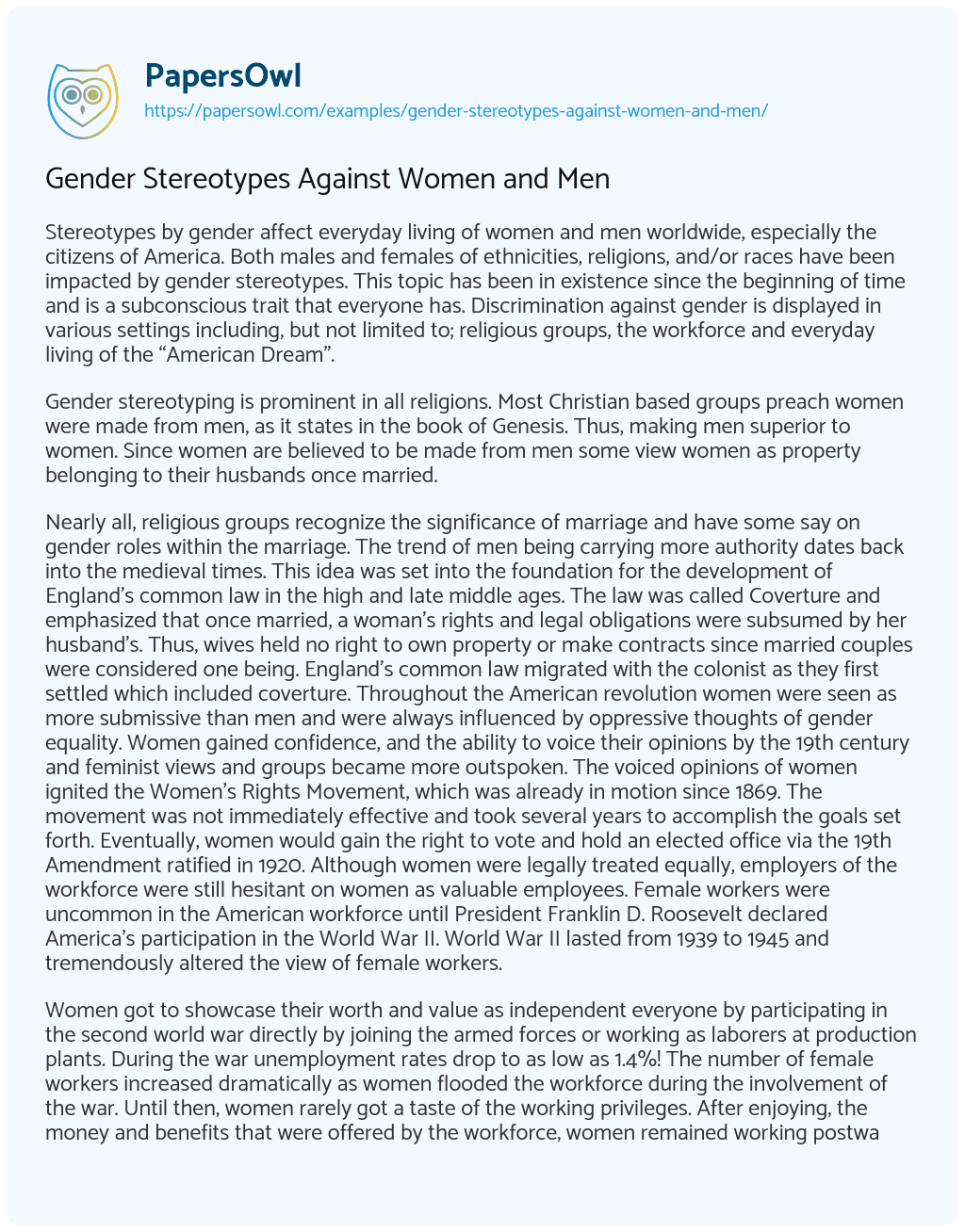 Stereotypes by gender affect everyday living of women and men worldwide, especially the citizens of America. Both males and females of ethnicities, religions, and/or races have been impacted by gender stereotypes. This topic has been in existence since the beginning of time and is a subconscious trait that everyone has. Discrimination against gender is displayed in various settings including, but not limited to; religious groups, the workforce and everyday living of the “American Dream”.

Gender stereotyping is prominent in all religions. Most Christian based groups preach women were made from men, as it states in the book of Genesis. Thus, making men superior to women. Since women are believed to be made from men some view women as property belonging to their husbands once married.

Nearly all, religious groups recognize the significance of marriage and have some say on gender roles within the marriage. The trend of men being carrying more authority dates back into the medieval times. This idea was set into the foundation for the development of England’s common law in the high and late middle ages. The law was called Coverture and emphasized that once married, a woman’s rights and legal obligations were subsumed by her husband’s. Thus, wives held no right to own property or make contracts since married couples were considered one being. England’s common law migrated with the colonist as they first settled which included coverture. Throughout the American revolution women were seen as more submissive than men and were always influenced by oppressive thoughts of gender equality. Women gained confidence, and the ability to voice their opinions by the 19th century and feminist views and groups became more outspoken. The voiced opinions of women ignited the Women’s Rights Movement, which was already in motion since 1869. The movement was not immediately effective and took several years to accomplish the goals set forth. Eventually, women would gain the right to vote and hold an elected office via the 19th Amendment ratified in 1920. Although women were legally treated equally, employers of the workforce were still hesitant on women as valuable employees. Female workers were uncommon in the American workforce until President Franklin D. Roosevelt declared America’s participation in the World War II. World War II lasted from 1939 to 1945 and tremendously altered the view of female workers.

Women got to showcase their worth and value as independent everyone by participating in the second world war directly by joining the armed forces or working as laborers at production plants. During the war unemployment rates drop to as low as 1.4%! The number of female workers increased dramatically as women flooded the workforce during the involvement of the war. Until then, women rarely got a taste of the working privileges. After enjoying, the money and benefits that were offered by the workforce, women remained working postwar. During wartime, the female population was able to join the army for military advances and work, which allowed for them to become a part of the majority as workers in the American society. Despite this, women were still treated different from many (white men). Women were granted access to fight for the nation during the Revolutionary War; yet years later, there was still segregation and discrimination in units against a gender diverse community. The women fought for the nation is a separate branch, the Women’s Army Auxiliary Corps, which was established in 1942 by the Army. The Women’s Army Auxiliary Corps was later renamed in 1943 to the Women’s Army Corps (WAC). The corps consisted of over 150,000 women who served as WAC during WWII. Finally, the Women’s Armed Services Integration Act was enacted on July 1948. The act enabled women to obtain permanent status in the Reserve and Active forces of the Army.

Stereotypes about gender are reinforced through daily practices like those in the military, school, and public government. Social tolerance of discrimination allow inequality among US citizens based on race, disability, gender, and socio-economic factors. Throughout the history of the American school system, children’s education was based on race (separate schools for black and whites); gender (Catholic All Girls Schools versus All Boys Schools), and disability (seperate classrooms and transportation for children with disabilities). Violence against women is another area affected by the gender inequality practices of society. Within the American society, battered or raped women were accused of doing something to promote the negative behavior toward them.

As United States citizens, we hold the key to reducing gender inequality and racial biases. Gender stereotyping is ingrained in the way our family and community act and react to life. This behavior becomes a part of our everyday beliefs and affect how we behave as adults. To eliminate or help reduce these stereotypes and prejudices within America we need to become more aware of the subtle ways’ society, the media, and our community promote these stereotypes and actively attempt to change these views and attitudes.

Today women are still battling against discrimination within the workforce. Men get higher pay as compared to women with the same qualifications and experience. The Bureau of Labor Statistics has researched the median weekly pay between genders in 2013. The Bureau of Labor Statistics concluded that between full-time workers, the median weekly earnings for females was $706, as compared to the $860 median weekly earnings of men. There are various movements existing nationwide protesting for equal pay and treatment. Nevertheless, the treatment today is not comparable to the horrible conditions in the past.

Gender Stereotypes Against Women and Men. (2021, Apr 16). Retrieved from https://papersowl.com/examples/gender-stereotypes-against-women-and-men/