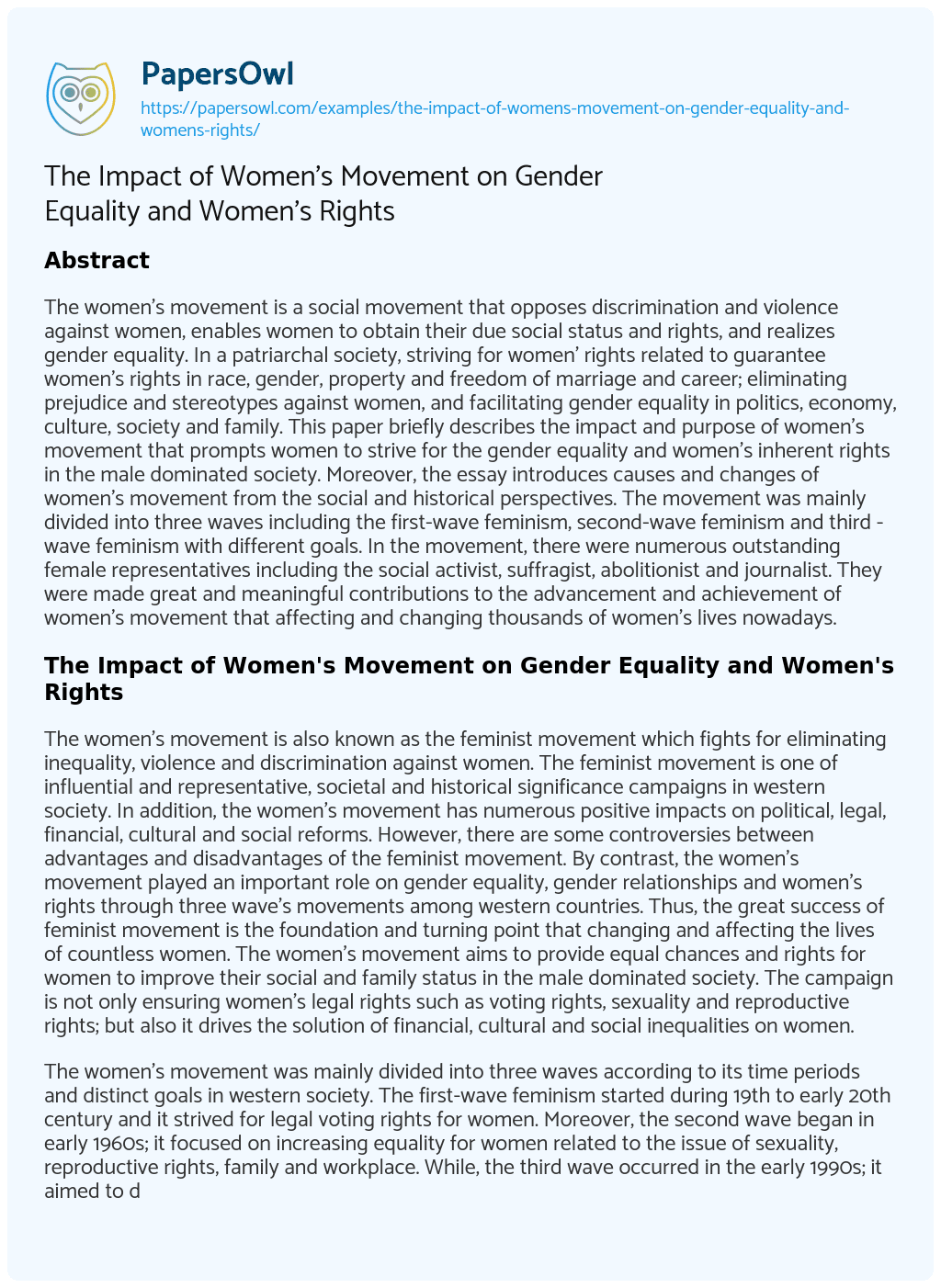 The women’s movement is a social movement that opposes discrimination and violence against women, enables women to obtain their due social status and rights, and realizes gender equality. In a patriarchal society, striving for women’ rights related to guarantee women’s rights in race, gender, property and freedom of marriage and career; eliminating prejudice and stereotypes against women, and facilitating gender equality in politics, economy, culture, society and family. This paper briefly describes the impact and purpose of women’s movement that prompts women to strive for the gender equality and women’s inherent rights in the male dominated society. Moreover, the essay introduces causes and changes of women’s movement from the social and historical perspectives. The movement was mainly divided into three waves including the first-wave feminism, second-wave feminism and third -wave feminism with different goals. In the movement, there were numerous outstanding female representatives including the social activist, suffragist, abolitionist and journalist. They were made great and meaningful contributions to the advancement and achievement of women’s movement that affecting and changing thousands of women’s lives nowadays.

The women’s movement is also known as the feminist movement which fights for eliminating inequality, violence and discrimination against women. The feminist movement is one of influential and representative, societal and historical significance campaigns in western society. In addition, the women’s movement has numerous positive impacts on political, legal, financial, cultural and social reforms. However, there are some controversies between advantages and disadvantages of the feminist movement. By contrast, the women’s movement played an important role on gender equality, gender relationships and women’s rights through three wave’s movements among western countries. Thus, the great success of feminist movement is the foundation and turning point that changing and affecting the lives of countless women. The women’s movement aims to provide equal chances and rights for women to improve their social and family status in the male dominated society. The campaign is not only ensuring women’s legal rights such as voting rights, sexuality and reproductive rights; but also it drives the solution of financial, cultural and social inequalities on women.

The women’s movement was mainly divided into three waves according to its time periods and distinct goals in western society. The first-wave feminism started during 19th to early 20th century and it strived for legal voting rights for women. Moreover, the second wave began in early 1960s; it focused on increasing equality for women related to the issue of sexuality, reproductive rights, family and workplace. While, the third wave occurred in the early 1990s; it aimed to deal problems with financial, cultural and social inequalities.

First of all, the first-wave feminism started during 19th to early 20th century and it strived for legal voting rights for women. “The first wave focuses on gaining human status; civic, social, economic and intellectual/ educational equality; and the political and legal status of women.”(Scholz, 2013, p.29) “Among the most prominent of those are the right to vote and hold public office, the right to speak in the public, the right to make a contract, the right to own property, and the right to protection of person.” (Scholz, 2013, p.35) The ideology demonstrates legal voting rights is the basic right of citizens that women should retain; in this way, women will have power and rights to participate in politics such as making laws, to take part in the work and also the decision rights in their families. During the 19th century, in the United States, there were two significant movements, women’s suffrage movement and abolition movement that laid the foundation of legal voting right progress for women. On one hand, the National American Woman Suffrage Association was an organization that campaigned for women’s suffrage in different states in America.

On the other hand, the group the National Woman’s Party took aggressive action in order to pass the women’s suffrage amendment, the 19th amendment of the United States. In 1920, the amendment was finally approved to grant women the right to vote. Moreover, the American social activist, suffragist and abolitionist Elizabeth Cady Stanton was playing a vital role in leading the early feminism movement. According to Stanton, she “used the Declaration of Independence to support the cause of women’s enfranchisement; she believed that all individuals are endowed with inalienable rights by God, among those rights is the right to vote.” (Scholz, 2013, p.36) Also, Stanton addressed serious issues involving divorce laws, property rights for married women, maternity, child care and abolition; these topics has caused widespread concern of women from that era until now. As a result, the first-wave feminism had a huge achievement regarded as the stepping stone to carry forward the women’s movement.

Second, the second-wave feminism began in early 1960s in the United States. It focused on issues of family, sexuality, workplace and reproductive rights for women. “The main goals of second-wave feminism were to open all job categories to women, tie compensation to job description, not gender; to have more equal division of labor within the home; pay less emphasis on the female as an object whose primary function is attracting the opposite sex; and the right for each individual to develop to her full potential.” (Hunsberger, 2017, p.17) In the year of 1963, the feminist writer Betty Friedan published the book, The Mystery of Women. The book criticized the fate of women is having marriage, rearing children and focusing on housework while men can have jobs. In addition, the ideology that Friedan argued has been embraced by most of women. At the same time, the book was raising awareness of women participating in work and to rethink about the problem of marriage and fertility for women. For example, “the percentage of women in the workforce climbed from 34 percent in 1950, to 38 percent in 1960, and to 43 percent in 1970.”(Hunsberger, 2017, p.17)

The data shows women and men should have the same rights and opportunities to participate in the work and get the corresponding payment to improve women’s social, economic and family positions. Furthermore, in 1966, the establishment of National Organization for Women (NOW) focused on issues of reproductive freedom and gender equality in the workplace. The victory of passage of the Equal Pay Act of 1963’s that ensured women owned equal rights and payment to the law as men’s. Besides, the Pregnancy Discrimination Act in 1978, it forbidden the marital rape and it also formulated the legalization of no-fault divorce. Next, the perspective of medical science also provided tools to help women’s liberation including contraceptives and abortion legalization. For instance, the birth control pills allowed women to delay and limit childbirth for attending education and careers. The choice of abortion that gives respect and responsibilities for women’s health; it also provides women more options and spaces for raising children. A series of social changes in the second-wave feminism involving women’s participation in the labor force, reproductive rights for women and women’s roles in marriage and family, which was an important social transition in western society.

Third, the third-wave feminism occurred during the early 1990s to early 2000. The campaign concentrated on financial, cultural and social inequalities to achieve the goal of gender equality. It also worked on eliminating the differentiation between men and women about reproductive and abortion rights, violence against women and race problems of women. The third wave created enormous expanding influences on media related to politic for women such as publishing books, developing websites and creating zines. “The Third Wave is buoyed by the confidence of having more opportunities and less sexism” (Baumgardner & Richards, 2000, p. 83). According to Social Movements, the third wave feminism was emphasized “diversity and the need to include women of colour, transgender people and poor women.” (Staggenborg & Ramos, 2016, p.119)

On the contrary, there are various negative influences of women’s movement related to radical feminists, anti-male and confusion between sexes. The radical feminist pays attention to pursue equal treatments in each aspect in lives by sculpting discrimination between men and women. This idea illustrates that men are dominant in the society. Thus, the feminist in women’s movement could build an ideological form of anti-male that harmful to the male. In this way, women feel they are better than men on professional and personal aspects. Then, the women’s movement creates confusion and misunderstanding problems between sexes; it also breaks trust relationship between men and women.

In conclusion, the women’s movement has a tremendous impact and change on women, and it continues today through political, legal, financial, cultural and social reforms. The goal of women’s movement promotes to create gender equality and strives for women’s rights on education, culture, laws, economic and identity. Furthermore, the purpose of women’s movement is accelerating the gender equality; it is including access to education, fight against racial discrimination, legal voting and speaking rights, reasonable and equality wage and resist violence against women. In addition, the achievement of the women’s movement improves women’s social position and family status; it also provides confidence and hope for women that they will have fair opportunities and equal rights for study, work and live in the male dominated society.

The Impact of Women's Movement on Gender Equality and Women's Rights. (2019, Jul 28). Retrieved from https://papersowl.com/examples/the-impact-of-womens-movement-on-gender-equality-and-womens-rights/

The Movement of Women’s Rights

About Women Rights and Equality

Education and the Women’s Liberation Movement