Gender Equality is your Issue too 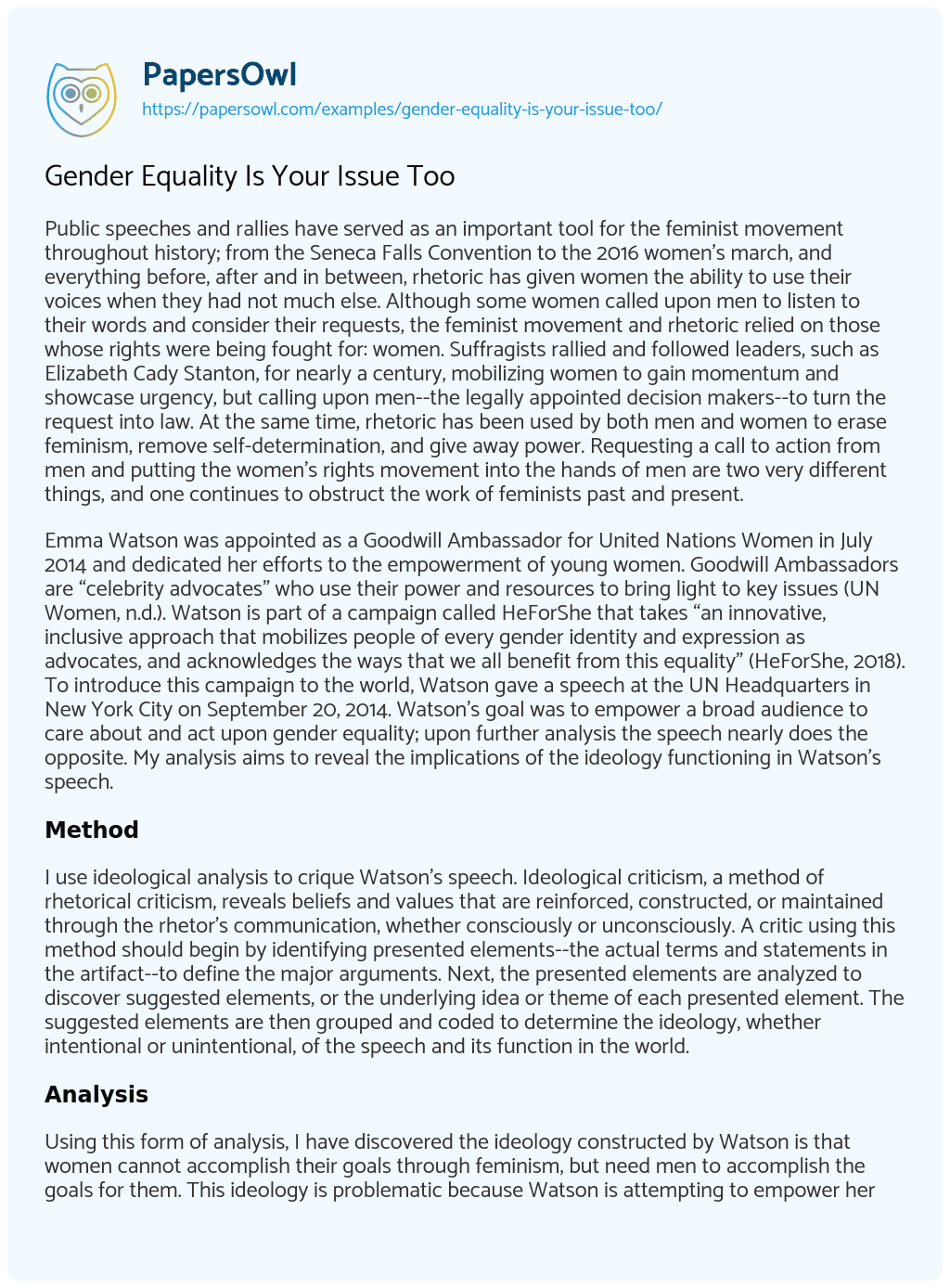 Public speeches and rallies have served as an important tool for the feminist movement throughout history; from the Seneca Falls Convention to the 2016 women’s march, and everything before, after and in between, rhetoric has given women the ability to use their voices when they had not much else. Although some women called upon men to listen to their words and consider their requests, the feminist movement and rhetoric relied on those whose rights were being fought for: women. Suffragists rallied and followed leaders, such as Elizabeth Cady Stanton, for nearly a century, mobilizing women to gain momentum and showcase urgency, but calling upon men–the legally appointed decision makers–to turn the request into law. At the same time, rhetoric has been used by both men and women to erase feminism, remove self-determination, and give away power. Requesting a call to action from men and putting the women’s rights movement into the hands of men are two very different things, and one continues to obstruct the work of feminists past and present.

Emma Watson was appointed as a Goodwill Ambassador for United Nations Women in July 2014 and dedicated her efforts to the empowerment of young women. Goodwill Ambassadors are “celebrity advocates” who use their power and resources to bring light to key issues (UN Women, n.d.). Watson is part of a campaign called HeForShe that takes “an innovative, inclusive approach that mobilizes people of every gender identity and expression as advocates, and acknowledges the ways that we all benefit from this equality” (HeForShe, 2018). To introduce this campaign to the world, Watson gave a speech at the UN Headquarters in New York City on September 20, 2014. Watson’s goal was to empower a broad audience to care about and act upon gender equality; upon further analysis the speech nearly does the opposite. My analysis aims to reveal the implications of the ideology functioning in Watson’s speech.

I use ideological analysis to crique Watson’s speech. Ideological criticism, a method of rhetorical criticism, reveals beliefs and values that are reinforced, constructed, or maintained through the rhetor’s communication, whether consciously or unconsciously. A critic using this method should begin by identifying presented elements–the actual terms and statements in the artifact–to define the major arguments. Next, the presented elements are analyzed to discover suggested elements, or the underlying idea or theme of each presented element. The suggested elements are then grouped and coded to determine the ideology, whether intentional or unintentional, of the speech and its function in the world.

Using this form of analysis, I have discovered the ideology constructed by Watson is that women cannot accomplish their goals through feminism, but need men to accomplish the goals for them. This ideology is problematic because Watson is attempting to empower her audience to care about women’s rights through commitment to the HeForShe campaign; furthermore, it is a problem for the overall feminist movement since she is handing the power, control, and responsibility directly to men. The following analysis will categorize the implications this speech, and its ideology, have on feminism.

Labels Don’t Matter, or Do They?

Watson provides a dictionary definition for feminism early in her speech as being the “social equality of the sexes” and even describes personal experiences that led her to identify as a feminist; however, in the same paragraph, she explains that women no longer choose to identify as feminists because of the stigma surrounding the word. The word itself is becoming unpopular. Here, Watson is suggesting that women are ashamed and embarrassed to identify as feminist–even if they do genuinely want to–because the label is not to their liking; therefore, if the label changed more women would openly join the movement without hesitation. A few moments later, Watson transitions into arguing that the word feminism is not actually what defines the movement “and if you still hate the word–it is not the word that is important, it’s the idea and the ambition behind it” (Watson, 2014). Essentially, words do not matter, but the ideas behind them do; so, the feminist movement can be redefined as something else that will be more easily digested by men and women who are turned off by the word feminism. Watson seems to be suggesting that more valuable change could happen for women if the movement simply had a different name.

In fact, Watson closes her speech by explaining that “we are struggling for a uniting word but the good news is that we have a uniting movement” (Waton, 2014). Merely suggesting that the fight for women’s rights being called feminism is what is holding women back and preventing unity is ill-informed. Suggesting that a campaign called HeForShe (literally giving men power and control within its name) is the uniting movement is a direct diminishment of women’s rights. Renaming the feminist movement to something that is more male friendly is in direct opposition of the definition that Watson herself provided to her audience. She insinuates that feminists cannot accomplish feminism because the word and movement are women-centered, and men need to feel welcomed in order to make any significant change.

Watson makes it clear near the opening of her speech that if she knows one thing with complete certainty, it is that the association between fighting for women’s rights and hating men needs to stop. How does she plan to help stop this? By cordially inviting men to join the women’s movement in a way that showcases the everyday struggles men face due to socially constructed gender scripts and stereotypes. The second line she speaks claims that “we need your help”; meaning: we (women) need your (men) help because we have not yet accomplished complete gender equality, and you have more power than we do. Therefore, Watson “would like to take this opportunity to extend your formal invitation” (Watson, 2014) to fight for gender equality–not feminism–because it negatively impacts men too. She lists several reasons why men should care, most of which are not about the struggles and inequalities that women face on a daily basis at home, work, or within society generally. She states that this invitation will actually help the women’s movement because once men are completely free of any gender stereotypes they face, then (and only then) will things begin to change for women as a “natural consequence.” Implying that a majority of men have not been involved in feminism because feminists were not appealing to the hardships of men is sad. In order for men to care, Watson seems to believe that the fight for women’s rights needs to become the fight for men’s rights, and men need a formal invitation to participate in something they uphold in daily life.

Power: Free for the Taking

Now that Watson has properly invited men to do their part in fighting for gender equality, she tries to make sure that men understand the weight of eradicating inequality is on their shoulders. She argues that men should step in in order to free their sisters, mothers, and daughters from prejudice, but also their sons. If men ensure that they not longer have to be aggressive and in control, women will not have to be submissive or controlled. This statement alone gives all of the power to men by indicating women cannot freely choose whether to be dominant and in control so long as any man within her environment is doing so. This eliminates all self-determination for women and allows men to control the destiny of women. Watson claims that she has witnessed her “father’s role as a parent being valued less by society” (Watson, 2014) which may be true, considering that society places most parental expectation and responsibility on mothers and has done so for centuries. Society will chastise mothers who do not make every possible sacrifice for their child, but gives absent father an easier pass when they step away from their children. It seems that Watson is asking men to request more recognition for being fathers without having to take on additional responsibilities; she is suggesting fathers deserve acknowledgement and appreciation for simply being fathers, giving more rise in power to men in this role. HeForShe is the movement that will fight for women by relying on the power of men. HeForShe, in its label alone, gives power to men and removes it from women.

The implications of an ideology such as Watson’s on the feminist movement are severely negative. While attempting to empower a broad audience to see gender equality as a broad issue that impacts all people, she simultaneously erased feminism, suggested it was accomplishing nothing, and gave the responsibility to men. Meaning and power exist within symbols, so suggesting that the word given to such a historical and vital movement is a simple way to erase the movement altogether. Although some change for women does require men to get involved, a complete handover of women’s rights and power to men is not something that should ever be done, especially in the name of feminism, as Watson defines it.

An ideology that supports the notion that women cannot accomplish the goals of feminism, but men can, perpetuates the systematic sexism that causes inequality in the first place. It is unfair and unethical to suggest that feminism has not made any accomplishments when American women currently have the right to vote, open a bank account, file for divorce, buy a home, obtain an education, file assault charges, and run for political office, among many other opportunities. However, it is safe to say that women still do not hold as much power in any of these contexts as ment and are refused many other opportunities. If the women’s rights movement wishes to extend a call to action to men, or any and all other individuals who are not active participants, the request should not present the issue in a way that suggests female weakness. The feminist movement should not have to rebrand itself to cater to the preferences of those who are ignorant to the injustices that women face; rather, the presentation of these injustices should define how crucial change for women is for society as a whole.

Gender Equality Is Your Issue Too. (2021, Feb 25). Retrieved from https://papersowl.com/examples/gender-equality-is-your-issue-too/

Be the he for she Movement

When do we Know when we have Achieved Gender Equality?