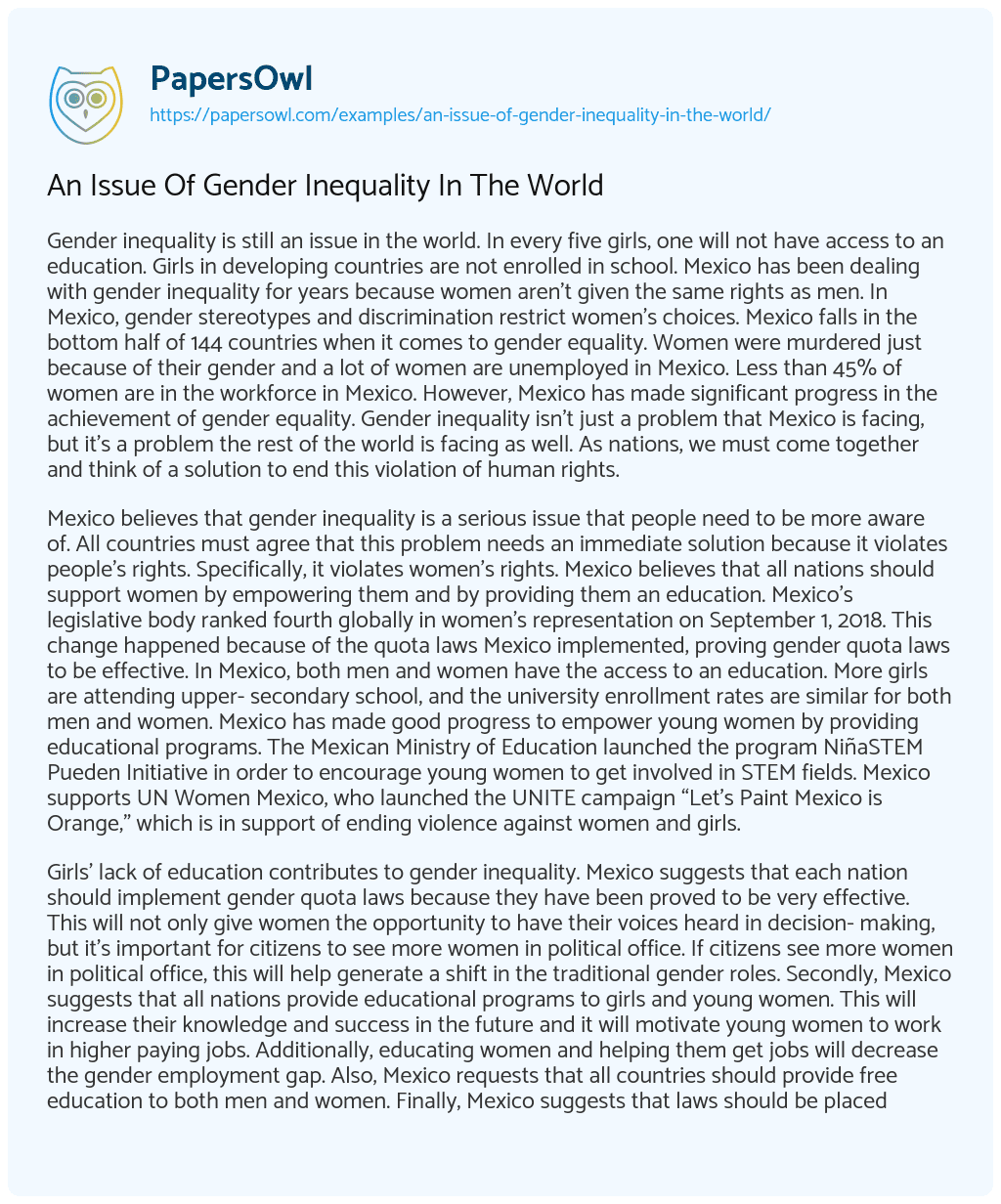 Gender inequality is still an issue in the world. In every five girls, one will not have access to an education. Girls in developing countries are not enrolled in school. Mexico has been dealing with gender inequality for years because women aren’t given the same rights as men. In Mexico, gender stereotypes and discrimination restrict women’s choices. Mexico falls in the bottom half of 144 countries when it comes to gender equality. Women were murdered just because of their gender and a lot of women are unemployed in Mexico. Less than 45% of women are in the workforce in Mexico. However, Mexico has made significant progress in the achievement of gender equality. Gender inequality isn’t just a problem that Mexico is facing, but it’s a problem the rest of the world is facing as well. As nations, we must come together and think of a solution to end this violation of human rights.

Mexico believes that gender inequality is a serious issue that people need to be more aware of. All countries must agree that this problem needs an immediate solution because it violates people’s rights. Specifically, it violates women’s rights. Mexico believes that all nations should support women by empowering them and by providing them an education. Mexico’s legislative body ranked fourth globally in women’s representation on September 1, 2018. This change happened because of the quota laws Mexico implemented, proving gender quota laws to be effective. In Mexico, both men and women have the access to an education. More girls are attending upper- secondary school, and the university enrollment rates are similar for both men and women. Mexico has made good progress to empower young women by providing educational programs. The Mexican Ministry of Education launched the program NiñaSTEM Pueden Initiative in order to encourage young women to get involved in STEM fields. Mexico supports UN Women Mexico, who launched the UNITE campaign “Let’s Paint Mexico is Orange,” which is in support of ending violence against women and girls.

Girls’ lack of education contributes to gender inequality. Mexico suggests that each nation should implement gender quota laws because they have been proved to be very effective. This will not only give women the opportunity to have their voices heard in decision- making, but it’s important for citizens to see more women in political office. If citizens see more women in political office, this will help generate a shift in the traditional gender roles. Secondly, Mexico suggests that all nations provide educational programs to girls and young women. This will increase their knowledge and success in the future and it will motivate young women to work in higher paying jobs. Additionally, educating women and helping them get jobs will decrease the gender employment gap. Also, Mexico requests that all countries should provide free education to both men and women. Finally, Mexico suggests that laws should be placed to ensure women and men equality. Mexico looks forward to end gender inequality and hopes for a brighter future for women all around the world.

An Issue Of Gender Inequality In The World. (2021, Feb 19). Retrieved from https://papersowl.com/examples/an-issue-of-gender-inequality-in-the-world/

The Roots of Gender Inequality in Developing Countries