The Roots of Gender Inequality in Developing Countries 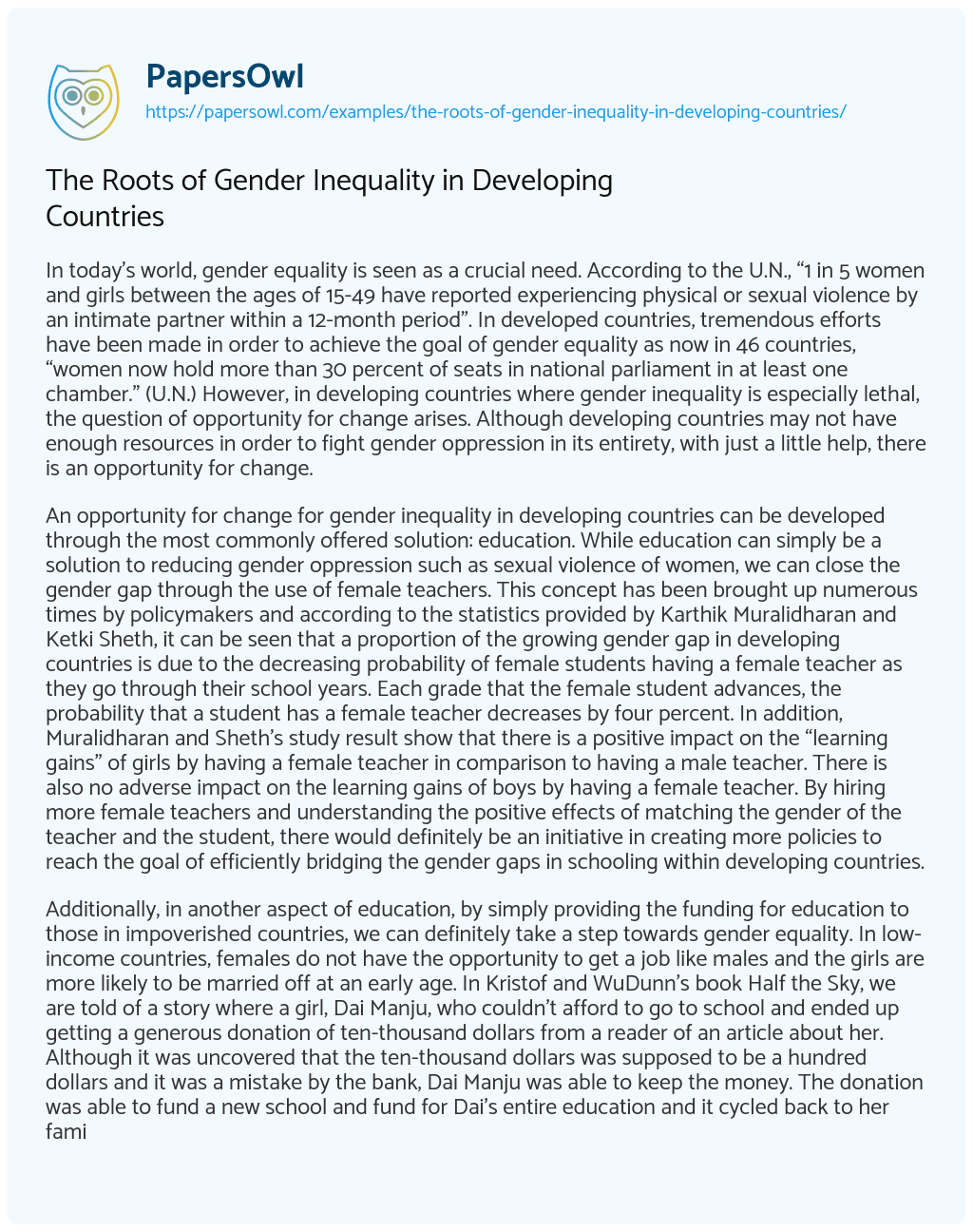 In today’s world, gender equality is seen as a crucial need. According to the U.N., “1 in 5 women and girls between the ages of 15-49 have reported experiencing physical or sexual violence by an intimate partner within a 12-month period”. In developed countries, tremendous efforts have been made in order to achieve the goal of gender equality as now in 46 countries, “women now hold more than 30 percent of seats in national parliament in at least one chamber.” (U.N.) However, in developing countries where gender inequality is especially lethal, the question of opportunity for change arises. Although developing countries may not have enough resources in order to fight gender oppression in its entirety, with just a little help, there is an opportunity for change.

An opportunity for change for gender inequality in developing countries can be developed through the most commonly offered solution: education. While education can simply be a solution to reducing gender oppression such as sexual violence of women, we can close the gender gap through the use of female teachers. This concept has been brought up numerous times by policymakers and according to the statistics provided by Karthik Muralidharan and Ketki Sheth, it can be seen that a proportion of the growing gender gap in developing countries is due to the decreasing probability of female students having a female teacher as they go through their school years. Each grade that the female student advances, the probability that a student has a female teacher decreases by four percent. In addition, Muralidharan and Sheth’s study result show that there is a positive impact on the “learning gains” of girls by having a female teacher in comparison to having a male teacher. There is also no adverse impact on the learning gains of boys by having a female teacher. By hiring more female teachers and understanding the positive effects of matching the gender of the teacher and the student, there would definitely be an initiative in creating more policies to reach the goal of efficiently bridging the gender gaps in schooling within developing countries.

Additionally, in another aspect of education, by simply providing the funding for education to those in impoverished countries, we can definitely take a step towards gender equality. In low-income countries, females do not have the opportunity to get a job like males and the girls are more likely to be married off at an early age. In Kristof and WuDunn’s book Half the Sky, we are told of a story where a girl, Dai Manju, who couldn’t afford to go to school and ended up getting a generous donation of ten-thousand dollars from a reader of an article about her. Although it was uncovered that the ten-thousand dollars was supposed to be a hundred dollars and it was a mistake by the bank, Dai Manju was able to keep the money. The donation was able to fund a new school and fund for Dai’s entire education and it cycled back to her family as her cousins were able to receive an education as well. With the education that these girls were able to receive, the girls were able to obtain jobs that improved the economy of an entire community in China. When girls in impoverished countries are able to achieve an education and a job, they avoid the likelihood of being “sold off” to males at a young age. Opportunity for women tends to knock on the door when intervention and reforms are made by the government. For example, the “return to social policy” as offered by Shahra Razavi can be seen as an advocate for gender equality. By “investing in children” (Razavi, 2007), we are ultimately providing more attention and care to children thus bringing upon light to an issue that shapes experiences of many women both at home and in the labor market. With the government providing support, the gender hierarchy will slowly start to crumble.

Through gender consciousness, the opportunity for change rises immensely. For example, in situations like in Korea in the pyogo mushroom industry, the labor force is centralized around the male labor force with females being victimized. Women of the labor force simply allowed their husbands to make the leading decisions and let the males handle big and important tasks. However, it seems that these women let the gender divide exist. In an interview with 30 village women, Jeong and Shin, discovered that the women simply did not take stands in community affairs and let their husbands lead their jobs even though they worked together. They also let themselves stand below their husbands in the family hierarchy as their husbands give them an allowance. However, through the awareness developed by the learning individually or along with the support of other women, women begin to gain an understanding and reject the status quo. This “connected action” sprouts from their awareness and commitment to promoting change for women and it is this action that these women take which can be seen as powerful as it challenges the patriarchy. In these situations, the government also needs to take a leading role in challenging the patriarchal and hierarchical structure.

The Roots of Gender Inequality in Developing Countries. (2021, Jul 10). Retrieved from https://papersowl.com/examples/the-roots-of-gender-inequality-in-developing-countries/