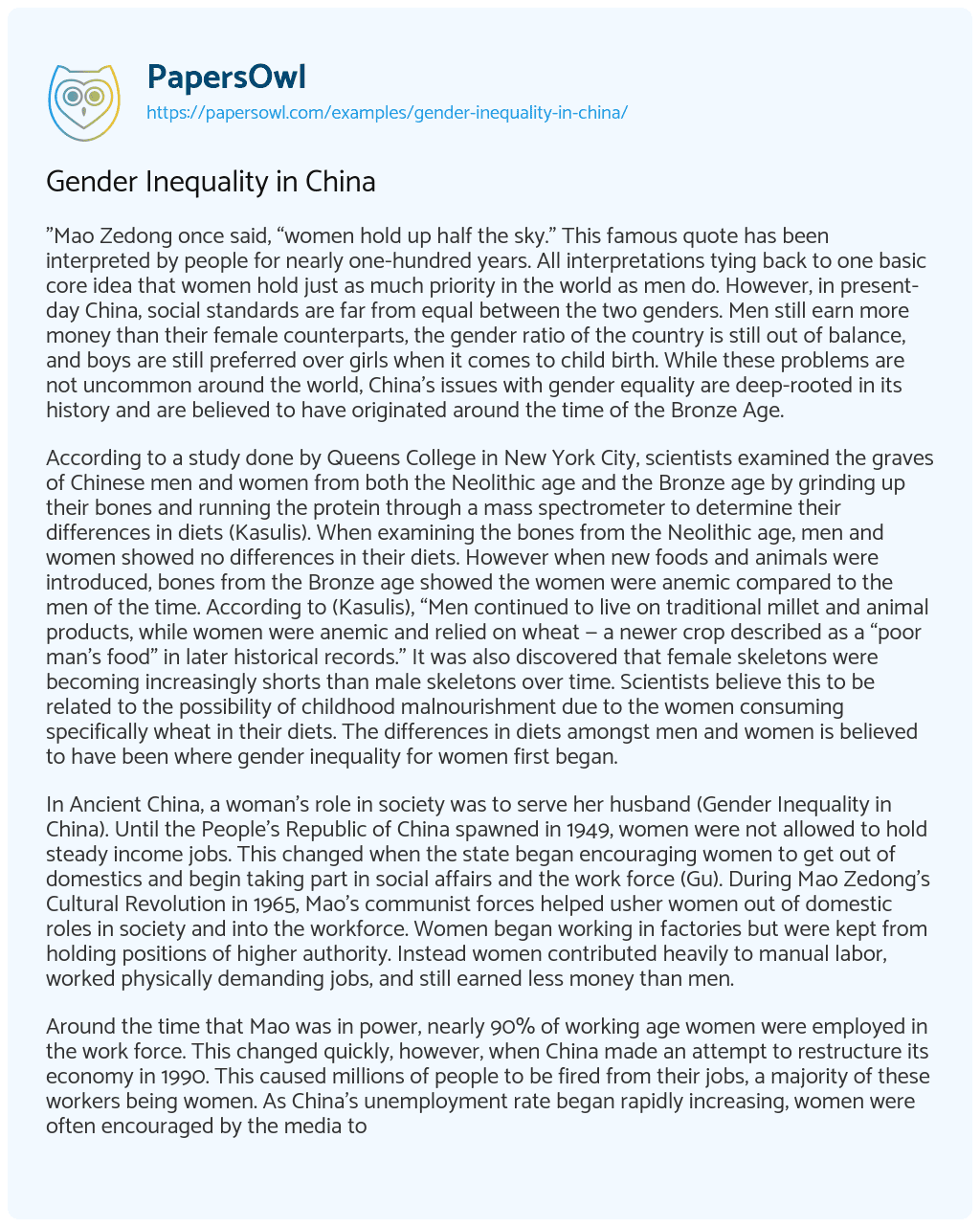 “Mao Zedong once said, “women hold up half the sky.” This famous quote has been interpreted by people for nearly one-hundred years. All interpretations tying back to one basic core idea that women hold just as much priority in the world as men do. However, in present-day China, social standards are far from equal between the two genders. Men still earn more money than their female counterparts, the gender ratio of the country is still out of balance, and boys are still preferred over girls when it comes to child birth. While these problems are not uncommon around the world, China’s issues with gender equality are deep-rooted in its history and are believed to have originated around the time of the Bronze Age.

According to a study done by Queens College in New York City, scientists examined the graves of Chinese men and women from both the Neolithic age and the Bronze age by grinding up their bones and running the protein through a mass spectrometer to determine their differences in diets (Kasulis). When examining the bones from the Neolithic age, men and women showed no differences in their diets. However when new foods and animals were introduced, bones from the Bronze age showed the women were anemic compared to the men of the time. According to (Kasulis), “Men continued to live on traditional millet and animal products, while women were anemic and relied on wheat — a newer crop described as a “poor man’s food” in later historical records.” It was also discovered that female skeletons were becoming increasingly shorts than male skeletons over time. Scientists believe this to be related to the possibility of childhood malnourishment due to the women consuming specifically wheat in their diets. The differences in diets amongst men and women is believed to have been where gender inequality for women first began.

In Ancient China, a woman’s role in society was to serve her husband (Gender Inequality in China). Until the People’s Republic of China spawned in 1949, women were not allowed to hold steady income jobs. This changed when the state began encouraging women to get out of domestics and begin taking part in social affairs and the work force (Gu). During Mao Zedong’s Cultural Revolution in 1965, Mao’s communist forces helped usher women out of domestic roles in society and into the workforce. Women began working in factories but were kept from holding positions of higher authority. Instead women contributed heavily to manual labor, worked physically demanding jobs, and still earned less money than men.

Around the time that Mao was in power, nearly 90% of working age women were employed in the work force. This changed quickly, however, when China made an attempt to restructure its economy in 1990. This caused millions of people to be fired from their jobs, a majority of these workers being women. As China’s unemployment rate began rapidly increasing, women were often encouraged by the media to quit their jobs so men could be making money instead. This revived many old ideas from Ancient China about how a woman should serve her husband and take care of the household. By 2010, the employment rate of women dropped by nearly 30%. Unfortunately, the work force is not the only place women find discrimination against them.

When Deng Xiaoping created the “One Child Policy” in 1979, the population began to quickly favorite male children over female children. Parents wanted to have a child that could care for them when they were older and “they did not believe women could do this” (Gender Inequality in China). This is also led for parents to take extreme measures to ensure they had a male child. According to (Gender Inequality in China), “[since] families could only have once child, parents began to give up, abandon or, in extreme cases, kill their infant daughters.” This has caused orphanages in China to fill up with abandoned baby girls and many of them end up in American households through adoption. This puts the gender ratio in China even further out of balance, which is believed to be causing crime rates in China to rise due to men needing to compete against each other to find a wife. These problems continue to grow as the gender gap widens even further today.

Over the past 10 years, 70% of the countries in the world have worked to decrease their economic gender gaps while China’s continued to grow apart even further in that same time period. The Global Gender Gap Report from 2015 reported that in China “women received 56% to 79% of men’s income” (Gu). Despite the increases in China’s gender gaps over recent years, there have still been several steps forward toward equality between men and women

On February 21st, 2019 the China Conference was held in the JW Marriot Hong Kong, where a panel was held specifically to discuss the importance of women in the economy. According to (Cremer), “China ranks 70th globally in wage equality, [and] only 17 per cent of senior managers are women, and that the official retirement age is five years earlier than for men, which significantly reduces potential earnings.” Amongst these problems, education is a challenge for women as well. Many women often are discouraged from pursuing an education. Despite this, the average attendance rate for women at Chinese universities is significantly higher than it is for men.

The role of women in China’s modern-day society has significantly changed from what it used to be in the mid 1900’s. While many challenges still stand in their way, women continue to push towards equality, despite the opposition of the economy. Women all over the world continue to fight their own battle for equality. Maybe it’s time we finally stand by them?