Misconception when it Comes to the Protestant Reformation 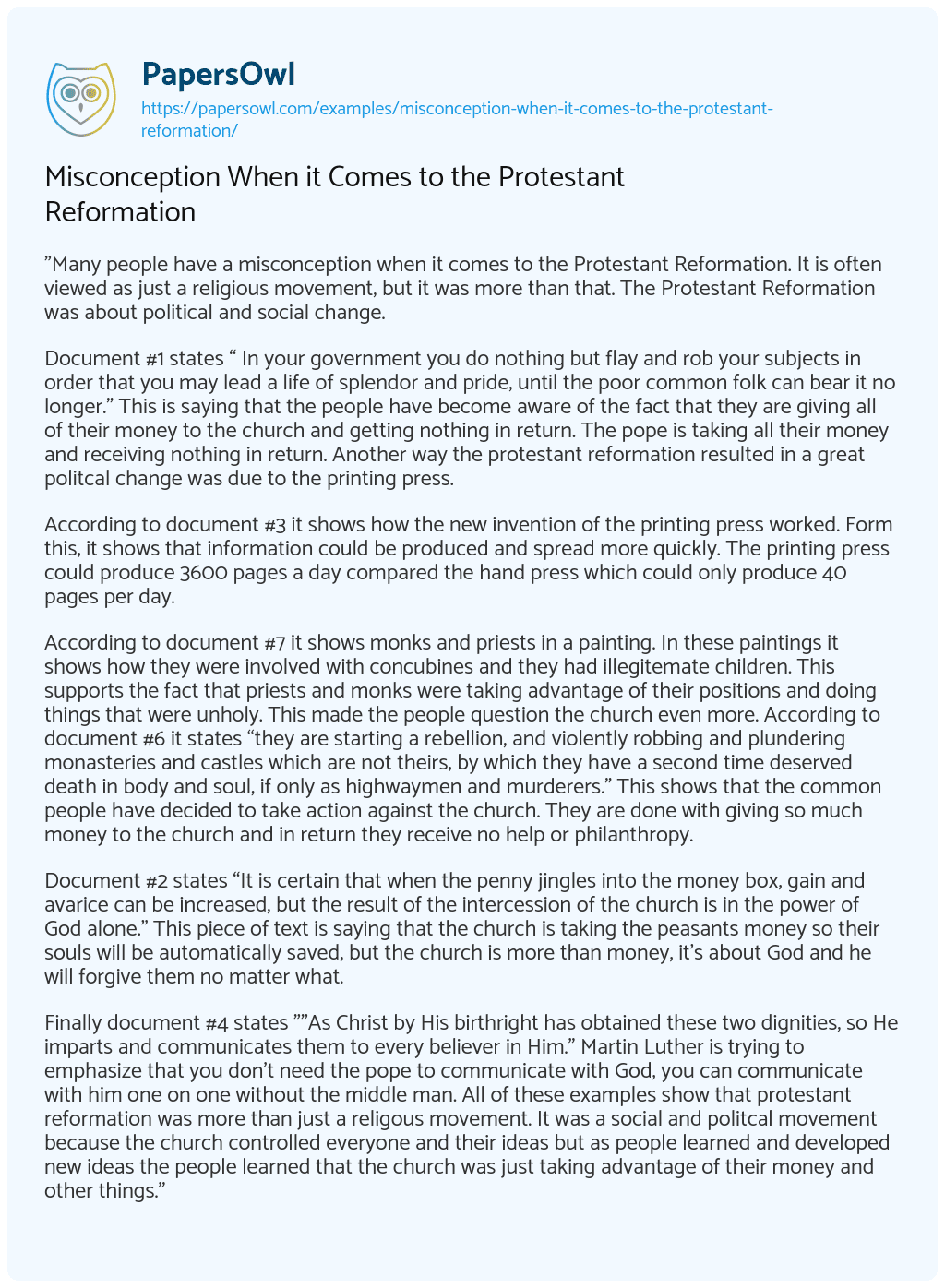 Document #1 states “ In your government you do nothing but flay and rob your subjects in order that you may lead a life of splendor and pride, until the poor common folk can bear it no longer.” This is saying that the people have become aware of the fact that they are giving all of their money to the church and getting nothing in return. The pope is taking all their money and receiving nothing in return. Another way the protestant reformation resulted in a great politcal change was due to the printing press.

According to document #3 it shows how the new invention of the printing press worked. Form this, it shows that information could be produced and spread more quickly. The printing press could produce 3600 pages a day compared the hand press which could only produce 40 pages per day.

According to document #7 it shows monks and priests in a painting. In these paintings it shows how they were involved with concubines and they had illegitemate children. This supports the fact that priests and monks were taking advantage of their positions and doing things that were unholy. This made the people question the church even more. According to document #6 it states “they are starting a rebellion, and violently robbing and plundering monasteries and castles which are not theirs, by which they have a second time deserved death in body and soul, if only as highwaymen and murderers.” This shows that the common people have decided to take action against the church. They are done with giving so much money to the church and in return they receive no help or philanthropy.

Document #2 states “It is certain that when the penny jingles into the money box, gain and avarice can be increased, but the result of the intercession of the church is in the power of God alone.” This piece of text is saying that the church is taking the peasants money so their souls will be automatically saved, but the church is more than money, it’s about God and he will forgive them no matter what.

Finally document #4 states “”As Christ by His birthright has obtained these two dignities, so He imparts and communicates them to every believer in Him.” Martin Luther is trying to emphasize that you don’t need the pope to communicate with God, you can communicate with him one on one without the middle man. All of these examples show that protestant reformation was more than just a religous movement. It was a social and politcal movement because the church controlled everyone and their ideas but as people learned and developed new ideas the people learned that the church was just taking advantage of their money and other things.”

Misconception When it Comes to the Protestant Reformation. (2021, Mar 16). Retrieved from https://papersowl.com/examples/misconception-when-it-comes-to-the-protestant-reformation/

Influence of the Protestant Reformation