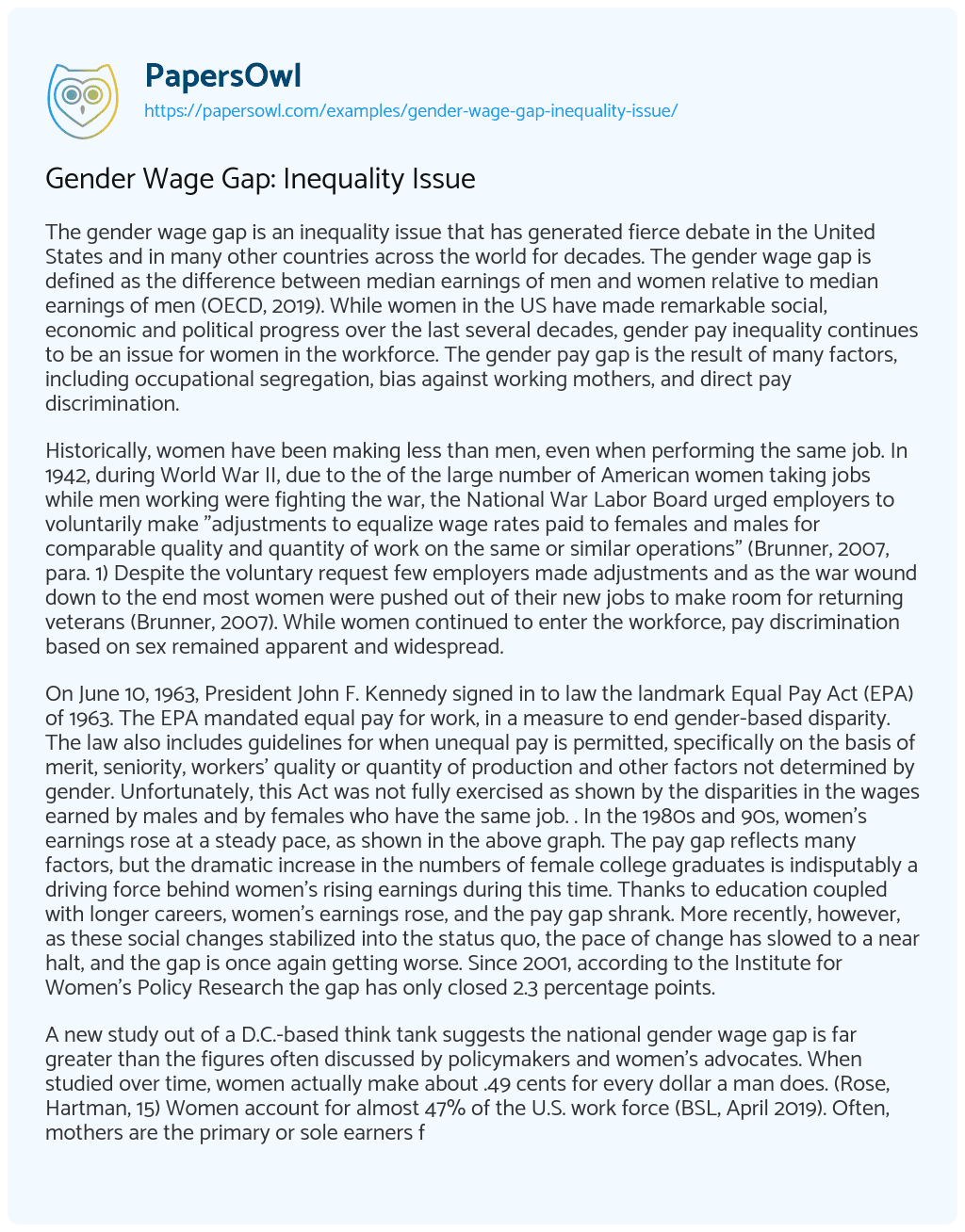 The gender wage gap is an inequality issue that has generated fierce debate in the United States and in many other countries across the world for decades. The gender wage gap is defined as the difference between median earnings of men and women relative to median earnings of men (OECD, 2019). While women in the US have made remarkable social, economic and political progress over the last several decades, gender pay inequality continues to be an issue for women in the workforce. The gender pay gap is the result of many factors, including occupational segregation, bias against working mothers, and direct pay discrimination.

Historically, women have been making less than men, even when performing the same job. In 1942, during World War II, due to the of the large number of American women taking jobs while men working were fighting the war, the National War Labor Board urged employers to voluntarily make “adjustments to equalize wage rates paid to females and males for comparable quality and quantity of work on the same or similar operations” (Brunner, 2007, para. 1) Despite the voluntary request few employers made adjustments and as the war wound down to the end most women were pushed out of their new jobs to make room for returning veterans (Brunner, 2007). While women continued to enter the workforce, pay discrimination based on sex remained apparent and widespread.

On June 10, 1963, President John F. Kennedy signed in to law the landmark Equal Pay Act (EPA) of 1963. The EPA mandated equal pay for work, in a measure to end gender-based disparity. The law also includes guidelines for when unequal pay is permitted, specifically on the basis of merit, seniority, workers’ quality or quantity of production and other factors not determined by gender. Unfortunately, this Act was not fully exercised as shown by the disparities in the wages earned by males and by females who have the same job. . In the 1980s and 90s, women’s earnings rose at a steady pace, as shown in the above graph. The pay gap reflects many factors, but the dramatic increase in the numbers of female college graduates is indisputably a driving force behind women’s rising earnings during this time. Thanks to education coupled with longer careers, women’s earnings rose, and the pay gap shrank. More recently, however, as these social changes stabilized into the status quo, the pace of change has slowed to a near halt, and the gap is once again getting worse. Since 2001, according to the Institute for Women’s Policy Research the gap has only closed 2.3 percentage points.

A new study out of a D.C.-based think tank suggests the national gender wage gap is far greater than the figures often discussed by policymakers and women’s advocates. When studied over time, women actually make about .49 cents for every dollar a man does. (Rose, Hartman, 15) Women account for almost 47% of the U.S. work force (BSL, April 2019). Often, mothers are the primary or sole earners for 40% of the households with children under 18, compared with 11% in 1960 (BSL, April 2019) and are more likely than men to have earned a bachelor degree. However, typically women continue to earn far less than men.

A report released in April 2016 by the Joint Economic Committee of the United States of Congress’ Democratic Staff, titled Gender Pay Inequality: Consequence for Women, Families, and the Economy, found that women in 2016 earned only .79 cents for every dollar men earned. Black and Latina women saw the biggest discrepancy, bringing in .60 cents and .55 cents, respectively, for every dollar earned by a white male. Motherhood is often a factor that contributes to the existence of gender wage pay gap, but the origins of the pay gap are more intricate than one cause. In 2016, the U.S. civilian workforce included 151 million full- and part-time employed workers; 53 percent were men, and 47 percent were women (U.S. Bureau of Labor Statistics, 2017). Women often time enter and leave the workforce more frequently than men. This is sometimes due to gender norms that reward men because men are considered the norm on which work has been based, others believe child rearing and starting families is a culprit. Many employers and industries still prioritize long, continuous, traditional work hours rather than flexible schedules, a preference that tends to put women with children at a disadvantage (Goldin, 2014). Working mothers also suffer from what is known as the Motherhood Penalty. According to a study originally conducted in 2007, the motherhood penalty “may account for a significant proportion of the gender gap in pay, as the pay gap between mothers and non-mothers could in fact be larger than the pay gap between men and women.” (Correll & Benard, 2007).

More recently, the Modern Family Index, hosted by Bright Horizons has conducted a yearly survey on this issue; As of 2018, the survey showed that 69% of working Americans say working moms are more likely to be passed up for a new job than other employees, 60% say career opportunities are given to less qualified employees instead of working moms who may be more skilled, 72% of both working moms and dads agree that women are penalized in their careers for starting families, while men are not (Modern Family Index, 2018). The survey reveals little progress, and in some cases a worsening of the workplace culture in the last five years. Adding to gender inequality, a number of studies show that women are less likely to be promoted (e.g., Hersch and Viscusi 1996).

For academics, some studies find lower probabilities of promotion for women, even after accounting for indicators of qualifications like number of publications, although results differ by field and gender differences appear to have diminished in recent years (Ginther and Kahn, forthcoming and Ceci, Ginther, Kahn, and Williams 2014). The possibility of discrimination is further suggested by studies in both the corporate world (Bell 2005, Shin 2012, Kurtulus and Tomaskovic-Devey 2012) and academia (Ehrenberg, Jakubson, Martin, Main, and Eisenberg 2012) finding that women at the lower ranks fare better (in terms of representation or wages) when women are more highly represented at the higher ranks. A study by Gayle, Golan and Miller in 2012 on executives found that women are less likely overall to become executive managers.

However, the authors attribute this difference to women’s greater likelihood of leaving the occupation; among those who survive in the occupation, the authors find that women are in fact more likely to be promoted, all else equal. According to the New York Times, statistics published by Fortune 500 showed the number of female CEOS fell 25% from the year before. A further study conducted by SNL Financial along with the S&P 500, which studied the gender pay gap among C-level employees in the banking industry from 2007 to 2014, revealed in two reports in 2015 that the he total number of female Chief Executive Officers (CEOs) of S&P 500 companies declined from 25 in 2014 to 21 in 2015. SNL’s findings suggest that even when women do make it to the top positions in banking, a gender pay gap persists. Female representation in the CEO ranks remains extremely low, and when women do make it to the top, it is typically at smaller banks.

Although some legislation currently exists so aid in the ending of the gender inequality issues, there is much work still needed to be done. The foundations for combating overt sex discrimination in the work place have been established on a national basis; the problem lies in the definition of discrimination. It is far too narrow for any significant changes to occur. The next step is to re-define and re-value gender differentiation. Hopefully, we’ll see the changes needed to close the gap, but it’s unlikely in the near future.

The Gender Wage Gap is the Gap Difference