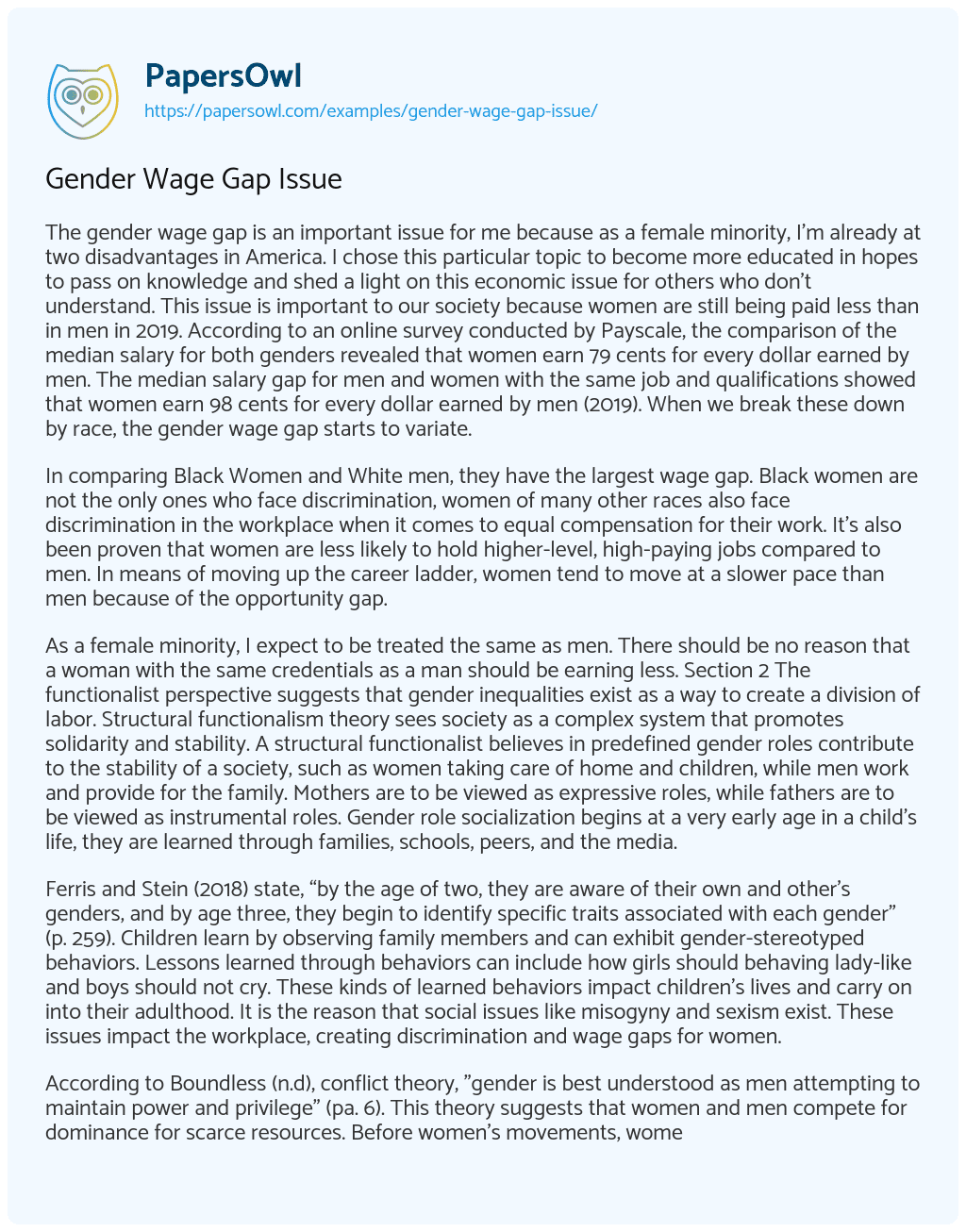 The gender wage gap is an important issue for me because as a female minority, I’m already at two disadvantages in America. I chose this particular topic to become more educated in hopes to pass on knowledge and shed a light on this economic issue for others who don’t understand. This issue is important to our society because women are still being paid less than in men in 2019. According to an online survey conducted by Payscale, the comparison of the median salary for both genders revealed that women earn 79 cents for every dollar earned by men. The median salary gap for men and women with the same job and qualifications showed that women earn 98 cents for every dollar earned by men (2019). When we break these down by race, the gender wage gap starts to variate.

In comparing Black Women and White men, they have the largest wage gap. Black women are not the only ones who face discrimination, women of many other races also face discrimination in the workplace when it comes to equal compensation for their work. It’s also been proven that women are less likely to hold higher-level, high-paying jobs compared to men. In means of moving up the career ladder, women tend to move at a slower pace than men because of the opportunity gap.

As a female minority, I expect to be treated the same as men. There should be no reason that a woman with the same credentials as a man should be earning less. Section 2 The functionalist perspective suggests that gender inequalities exist as a way to create a division of labor. Structural functionalism theory sees society as a complex system that promotes solidarity and stability. A structural functionalist believes in predefined gender roles contribute to the stability of a society, such as women taking care of home and children, while men work and provide for the family. Mothers are to be viewed as expressive roles, while fathers are to be viewed as instrumental roles. Gender role socialization begins at a very early age in a child’s life, they are learned through families, schools, peers, and the media.

Ferris and Stein (2018) state, “by the age of two, they are aware of their own and other’s genders, and by age three, they begin to identify specific traits associated with each gender” (p. 259). Children learn by observing family members and can exhibit gender-stereotyped behaviors. Lessons learned through behaviors can include how girls should behaving lady-like and boys should not cry. These kinds of learned behaviors impact children’s lives and carry on into their adulthood. It is the reason that social issues like misogyny and sexism exist. These issues impact the workplace, creating discrimination and wage gaps for women.

According to Boundless (n.d), conflict theory, “gender is best understood as men attempting to maintain power and privilege” (pa. 6). This theory suggests that women and men compete for dominance for scarce resources. Before women’s movements, women were not allowed to work for wages and depended on men for income because men were considered the breadwinners. Gender inequality still exists in the workplace today because due to this ongoing conflict that men want to control and women want the same treatment as men. This is a huge reason why a wage gap exists for women with the same qualifications working the same job as men.

Data from the Bureau of Labor Statistics (2017), show that employers make assumptions about what kind of work is best suited for different genders. This leads to funneling women in lower-paid, lower-level positions. Women tend to be overrepresented to work positions such as healthcare while men are working higher paying jobs such as engineering and computer sciences. This creates occupational segregation, another factor that contributes to the wage gap among both genders. The symbolic interactionism theory suggests that masculinity and feminism cultures are characteristics that are reinforced through daily interactions. It suggests that the meaning behind gender is that it’s not who we are but what we do and how we act. Masculine is characterized as strength, dominance, and assertiveness.

Feminine is characterized as supportive and caring. These characteristics created by society affect women in the workplace by creating institutionalized sexism. Giest and Myers (2016), suggest that “gender stratification refers to the social ranking, where men typically inhabit higher statuses than women” (para. 1). Gender stratification and the gender wage gap can be closely related to the workplace. The Census Bureau found that in 2017, full time, year-round working women earned 80% of what their male co-workers earned. The stereotypes created behind men and women have negatively impacted women by creating a wage gap. Section 3 Symbolic interactionism is “the only perspective that assumes an active, expressive model of the human actor and that treats the individual and the society at the same level of analysis” (O’Brien and Kollock 1997, p. 39).

This theory involves the interaction of individuals and how actions are interpreted. Symbolic Interactionist believes that discrimination is a social issue that is learned but can also be unlearned. Children and young adults are exposed to many interactions in life that may or may not shape who they become in the future. Teaching them equality and encouraging them to think in a positive way about every individual could decrease gender inequality in America. If we could construct a new social reality that requires us to leave abandon stereotypes about men and women, we could make it possible for individuals to start viewing others as deserving and equal. In eliminating sexism, we could start to shape new ideas about the roles and responsibilities men and women play in society. This could lead to a new era of equality for both men and women in the workplace, eliminating the gender gap wage.