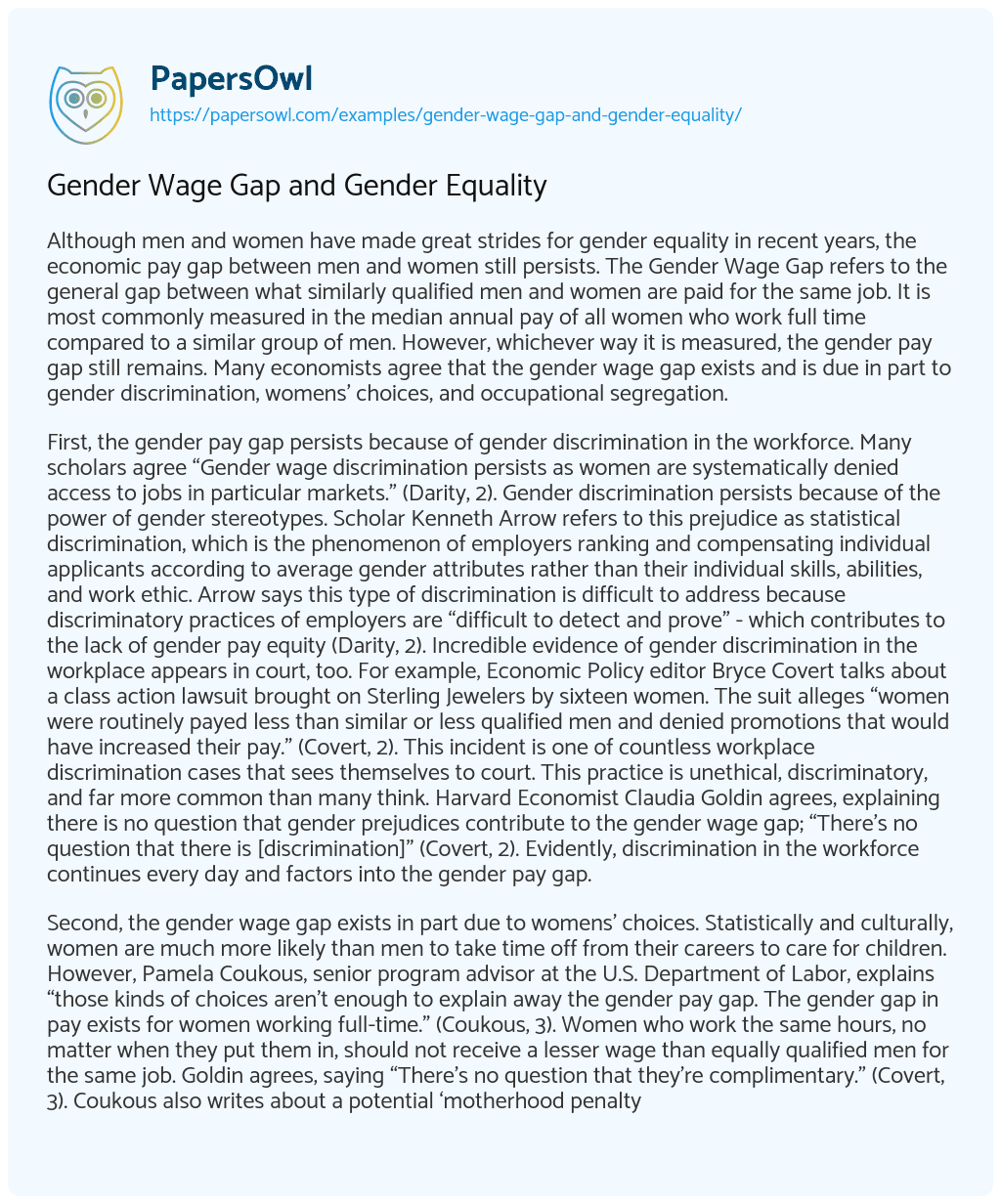 Although men and women have made great strides for gender equality in recent years, the economic pay gap between men and women still persists. The Gender Wage Gap refers to the general gap between what similarly qualified men and women are paid for the same job. It is most commonly measured in the median annual pay of all women who work full time compared to a similar group of men. However, whichever way it is measured, the gender pay gap still remains. Many economists agree that the gender wage gap exists and is due in part to gender discrimination, womens’ choices, and occupational segregation.

First, the gender pay gap persists because of gender discrimination in the workforce. Many scholars agree “Gender wage discrimination persists as women are systematically denied access to jobs in particular markets.” (Darity, 2). Gender discrimination persists because of the power of gender stereotypes. Scholar Kenneth Arrow refers to this prejudice as statistical discrimination, which is the phenomenon of employers ranking and compensating individual applicants according to average gender attributes rather than their individual skills, abilities, and work ethic. Arrow says this type of discrimination is difficult to address because discriminatory practices of employers are “difficult to detect and prove” – which contributes to the lack of gender pay equity (Darity, 2). Incredible evidence of gender discrimination in the workplace appears in court, too. For example, Economic Policy editor Bryce Covert talks about a class action lawsuit brought on Sterling Jewelers by sixteen women. The suit alleges “women were routinely payed less than similar or less qualified men and denied promotions that would have increased their pay.” (Covert, 2). This incident is one of countless workplace discrimination cases that sees themselves to court. This practice is unethical, discriminatory, and far more common than many think. Harvard Economist Claudia Goldin agrees, explaining there is no question that gender prejudices contribute to the gender wage gap; “There’s no question that there is [discrimination]” (Covert, 2). Evidently, discrimination in the workforce continues every day and factors into the gender pay gap.

Second, the gender wage gap exists in part due to womens’ choices. Statistically and culturally, women are much more likely than men to take time off from their careers to care for children. However, Pamela Coukous, senior program advisor at the U.S. Department of Labor, explains “those kinds of choices aren’t enough to explain away the gender pay gap. The gender gap in pay exists for women working full-time.” (Coukous, 3). Women who work the same hours, no matter when they put them in, should not receive a lesser wage than equally qualified men for the same job. Goldin agrees, saying “There’s no question that they’re complimentary.” (Covert, 3). Coukous also writes about a potential ‘motherhood penalty’, explaining “Researchers have found that merely the status of being a mother can lead to perceptions of lowered competence and commitment and lower salary offers .” (Coukous, 3). Mothers, more than anyone, should receive constant respect for everything they do to raise their children well. For example, my mother has done more for me than anything I could ever repay. The fact that her salary and livelihood could be in jeopardy simply because she chose to become a mother is outrageous. Womens’ choices clearly have a significant effect on the persistence of the gender wage gap.

Finally, the gender pay gap persists in part owing to occupational segregation. Occupational segregation is the distribution of workers among and within occupations, most often categorized by gender. Ariane Hegewisch and Maxwell Matite, researchers at the Institute for Women’s Policy Research, explain how occupational segregation by gender influences the gender pay gap. “The three largest occupations [for women] … together employ more than 13 percent of all women” (Hegewisch, Matite 1). Each of these three occupations – ‘secretaries and administrative assistants’, ‘elementary and middle school teachers’, and ‘registered nurses’ – are already female sex-typed – and women earn less than men in each of these three most common occupations for women. Surely a woman should not earn less than a man in an occupation that is already female sex-typed – or at all, for that matter. Authors Hegewisch and Matite agree, saying “Women … need enhanced efforts to ensure non-discriminatory hiring and pay practices”. (3) Discriminatory pay practices are more common than many realize. Men and women employed in similarly qualified occupations often share a significant difference in annual earnings. For example, “Maids make $19,750 a year at the median … while janitors make $22,590” on average. (Covert, 2) The similarity between the duties and qualifications of these two jobs makes the nearly $3000 annual earnings difference completely outrageous. Statistics like those demonstrated above prove that the wage gap persists even in low income situations. Hegewisch and Matite again note that low earnings are a significant issue for both genders. However “more than three times as many women than men work in occupations with median earnings for full-time work below the federal poverty threshold.” (Hegewisch, Matite 2). Occupational segregation and discriminatory pay practices among other factors explain the persistence of the gender pay gap.

Critics of the existence of the gender wage gap reference a common statistic called the 77 cents figure. The figure states that a woman at the median earns 77 cents on the dollar compared to man for the same job. Some say the figure is bunk and/or exaggerated. I disagree. Pamela Coukous explains that the size of the wage gap depends on how it is measured. “The most common estimate is based on the differences in annual earnings (currently about 23 cents difference per dollar).” (Coukous, 2). Regardless, the difference persists whatever way it is accounted for. Efforts to explain away the gender wage gap are misguided; because the pay gap persists any way it is measured, there should be less doubt that it exists in the first Economist Goldin again agrees, saying “It is an accurate statement of what it is.” (Covert, 2). The gender wage gap undoubtedly exists and is ascribable to a combination of gender discrimination in the workforce, womens’ choices, and occupational segregation. Economic injustice affects women day to day – and it is our job to fix it.

The Gender Wage Gap is the Gap Difference