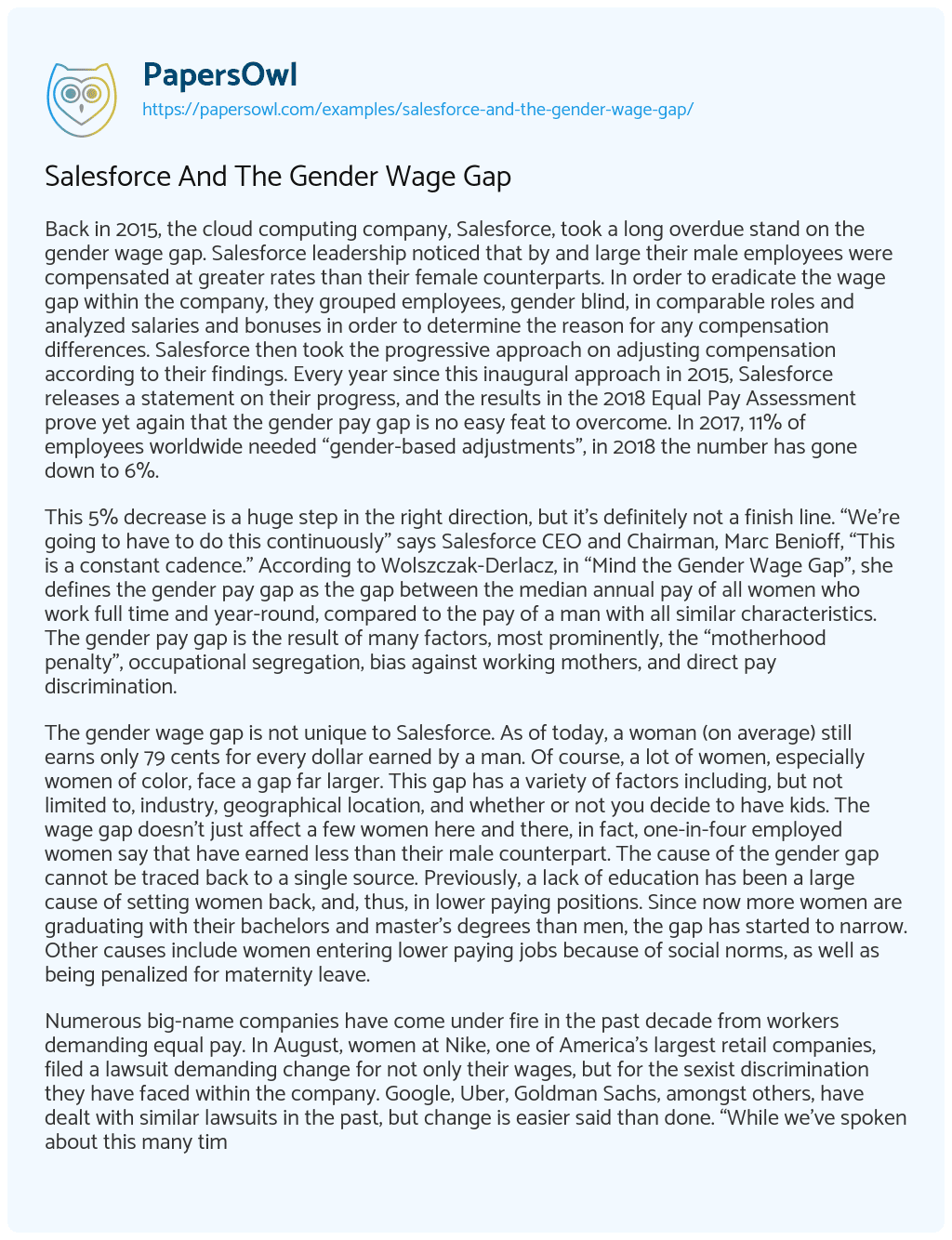 Back in 2015, the cloud computing company, Salesforce, took a long overdue stand on the gender wage gap. Salesforce leadership noticed that by and large their male employees were compensated at greater rates than their female counterparts. In order to eradicate the wage gap within the company, they grouped employees, gender blind, in comparable roles and analyzed salaries and bonuses in order to determine the reason for any compensation differences. Salesforce then took the progressive approach on adjusting compensation according to their findings. Every year since this inaugural approach in 2015, Salesforce releases a statement on their progress, and the results in the 2018 Equal Pay Assessment prove yet again that the gender pay gap is no easy feat to overcome. In 2017, 11% of employees worldwide needed “gender-based adjustments”, in 2018 the number has gone down to 6%.

This 5% decrease is a huge step in the right direction, but it’s definitely not a finish line. “We’re going to have to do this continuously” says Salesforce CEO and Chairman, Marc Benioff, “This is a constant cadence.” According to Wolszczak-Derlacz, in “Mind the Gender Wage Gap”, she defines the gender pay gap as the gap between the median annual pay of all women who work full time and year-round, compared to the pay of a man with all similar characteristics. The gender pay gap is the result of many factors, most prominently, the “motherhood penalty”, occupational segregation, bias against working mothers, and direct pay discrimination.

The gender wage gap is not unique to Salesforce. As of today, a woman (on average) still earns only 79 cents for every dollar earned by a man. Of course, a lot of women, especially women of color, face a gap far larger. This gap has a variety of factors including, but not limited to, industry, geographical location, and whether or not you decide to have kids. The wage gap doesn’t just affect a few women here and there, in fact, one-in-four employed women say that have earned less than their male counterpart. The cause of the gender gap cannot be traced back to a single source. Previously, a lack of education has been a large cause of setting women back, and, thus, in lower paying positions. Since now more women are graduating with their bachelors and master’s degrees than men, the gap has started to narrow. Other causes include women entering lower paying jobs because of social norms, as well as being penalized for maternity leave.

Numerous big-name companies have come under fire in the past decade from workers demanding equal pay. In August, women at Nike, one of America’s largest retail companies, filed a lawsuit demanding change for not only their wages, but for the sexist discrimination they have faced within the company. Google, Uber, Goldman Sachs, amongst others, have dealt with similar lawsuits in the past, but change is easier said than done. “While we’ve spoken about this many times,” says a statement from Nike obtained by the Wall Street Journal “[We have] tried different ways to achieve change, we have failed to gain traction – and our hiring and promotion decisions are not changing senior-level representation as quickly as we have wanted.”

In the past, large steps have been taken to aid in closing the wage gap, some more successful than others. The Equal Pay Act was introduced over fifty years ago, and since then, President Obama not only signed the Lilly Ledbetter Fair Pay Act and introduced the Paycheck Fairness Act, but he supported an important White House initiative to challenge companies to take the matter into their own hands. The Equal Pay Pledge was introduced in 2014 to encourage companies across all economic sectors to take action to close the gender wage gap, and, signing it requires each company to analyze their pay gap annually. The signatories include Amazon, Facebook, Airbnb, Spotify, Apple, LinkedIn, Microsoft, Adobe, eBay, Yahoo, Zillow, and over 100 more companies committed to closing the wage gap. “We acknowledge that women are often dissuaded by roles in technology not only due to the low representation of women in this industry but of the lower value placed on their contributions in these roles,” a written statement released by Spotify after signing the Equal Pay Pledge “In tech, women are promoted at lower rates and paid significantly less. Our support of the Women in Tech industry goes beyond just closing this pay gap.” Currently, the Trump White House has, and will continue to reverse Obama-era regulation targeting the wage gap. Therefore, it is ever more important for us, as citizens to not only be aware of this issue, but to focus on ending the disparity.

The method used to close the pay gap within each company varies slightly, whether they signed the pledge, or have been promoting pay equality from the beginning. Apple, along with many Silicon Valley tech companies, have been focused largely on hiring more women and other minorities. Starbucks conducted a companywide study on compensation and implemented the use of a base pay calculator to determine compensation based on experience level.

The gender wage gap is not going to change overnight, and, while some companies and our current administration in the White House are a few steps behind, many are rising to the occasion. We are seeing the focus of this issue continue to grow in America’s biggest technology companies, however we need to ensure that this vital issue remains spotlighted across the Nation, and not just within the confines of ultra-progressive San Francisco.

Salesforce And The Gender Wage Gap. (2020, Sep 23). Retrieved from https://papersowl.com/examples/salesforce-and-the-gender-wage-gap/