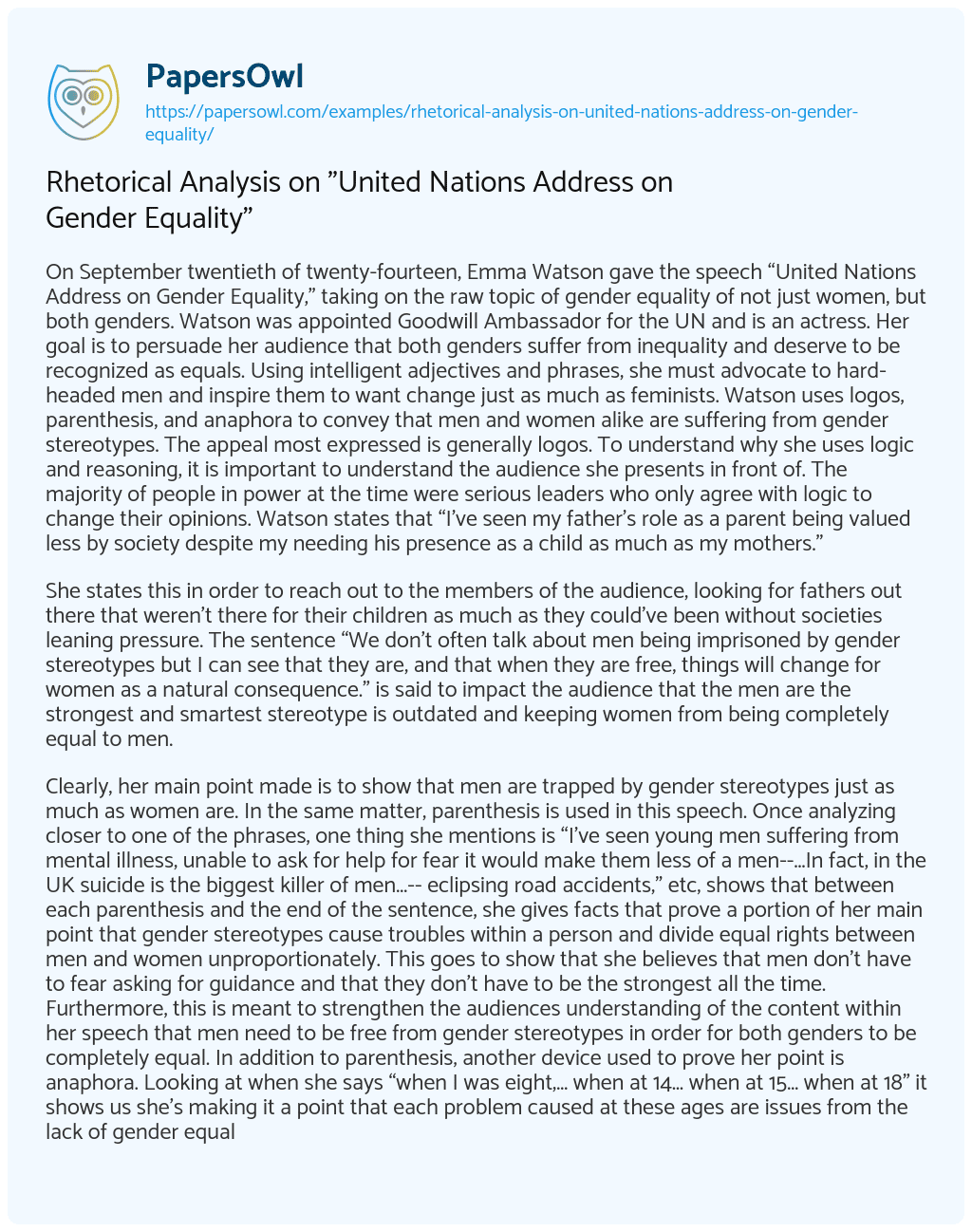 On September twentieth of twenty-fourteen, Emma Watson gave the speech “United Nations Address on Gender Equality,” taking on the raw topic of gender equality of not just women, but both genders. Watson was appointed Goodwill Ambassador for the UN and is an actress. Her goal is to persuade her audience that both genders suffer from inequality and deserve to be recognized as equals. Using intelligent adjectives and phrases, she must advocate to hard-headed men and inspire them to want change just as much as feminists. Watson uses logos, parenthesis, and anaphora to convey that men and women alike are suffering from gender stereotypes. The appeal most expressed is generally logos. To understand why she uses logic and reasoning, it is important to understand the audience she presents in front of. The majority of people in power at the time were serious leaders who only agree with logic to change their opinions. Watson states that “I’ve seen my father’s role as a parent being valued less by society despite my needing his presence as a child as much as my mothers.”

She states this in order to reach out to the members of the audience, looking for fathers out there that weren’t there for their children as much as they could’ve been without societies leaning pressure. The sentence “We don’t often talk about men being imprisoned by gender stereotypes but I can see that they are, and that when they are free, things will change for women as a natural consequence.” is said to impact the audience that the men are the strongest and smartest stereotype is outdated and keeping women from being completely equal to men.

Clearly, her main point made is to show that men are trapped by gender stereotypes just as much as women are. In the same matter, parenthesis is used in this speech. Once analyzing closer to one of the phrases, one thing she mentions is “I’ve seen young men suffering from mental illness, unable to ask for help for fear it would make them less of a men–…In fact, in the UK suicide is the biggest killer of men…– eclipsing road accidents,” etc, shows that between each parenthesis and the end of the sentence, she gives facts that prove a portion of her main point that gender stereotypes cause troubles within a person and divide equal rights between men and women unproportionately. This goes to show that she believes that men don’t have to fear asking for guidance and that they don’t have to be the strongest all the time. Furthermore, this is meant to strengthen the audiences understanding of the content within her speech that men need to be free from gender stereotypes in order for both genders to be completely equal. In addition to parenthesis, another device used to prove her point is anaphora. Looking at when she says “when I was eight,… when at 14… when at 15… when at 18” it shows us she’s making it a point that each problem caused at these ages are issues from the lack of gender equality. In the last sentence of the quote previously mentioned, she says “when at 18 my male friends were unable to express their feelings,” which correlates back with her main point of the horridness of gender stereotypes.

Also contributing to the basis of the whole speech, “I’ve seen my father’s… I’ve seen young men… I’ve seen men… Men don’t have the benefits of equality either” gives us her experiences that openly, even empathetically states her point she is trying to convey. By using so much anaphora, she consistently states the most important parts of her speech which tells how much men and women really do suffer from gender inequality as a whole. To conclude, Emma Watson persuades the audience that both genders alike are suffering from gender stereotypes and inequality using logos, parenthesis, and anaphora. Watson pushes that men and women suffer from gender stereotypes and each example she gives does a pretty good job at proving her point. Throughout her speech, she gives great examples of how her personal experiences back up each point she she makes, but she leaves out information that raises some questions unanswered which doesn’t leave as much as an impact on the audience as it could have.

Gender Equality is your Issue too