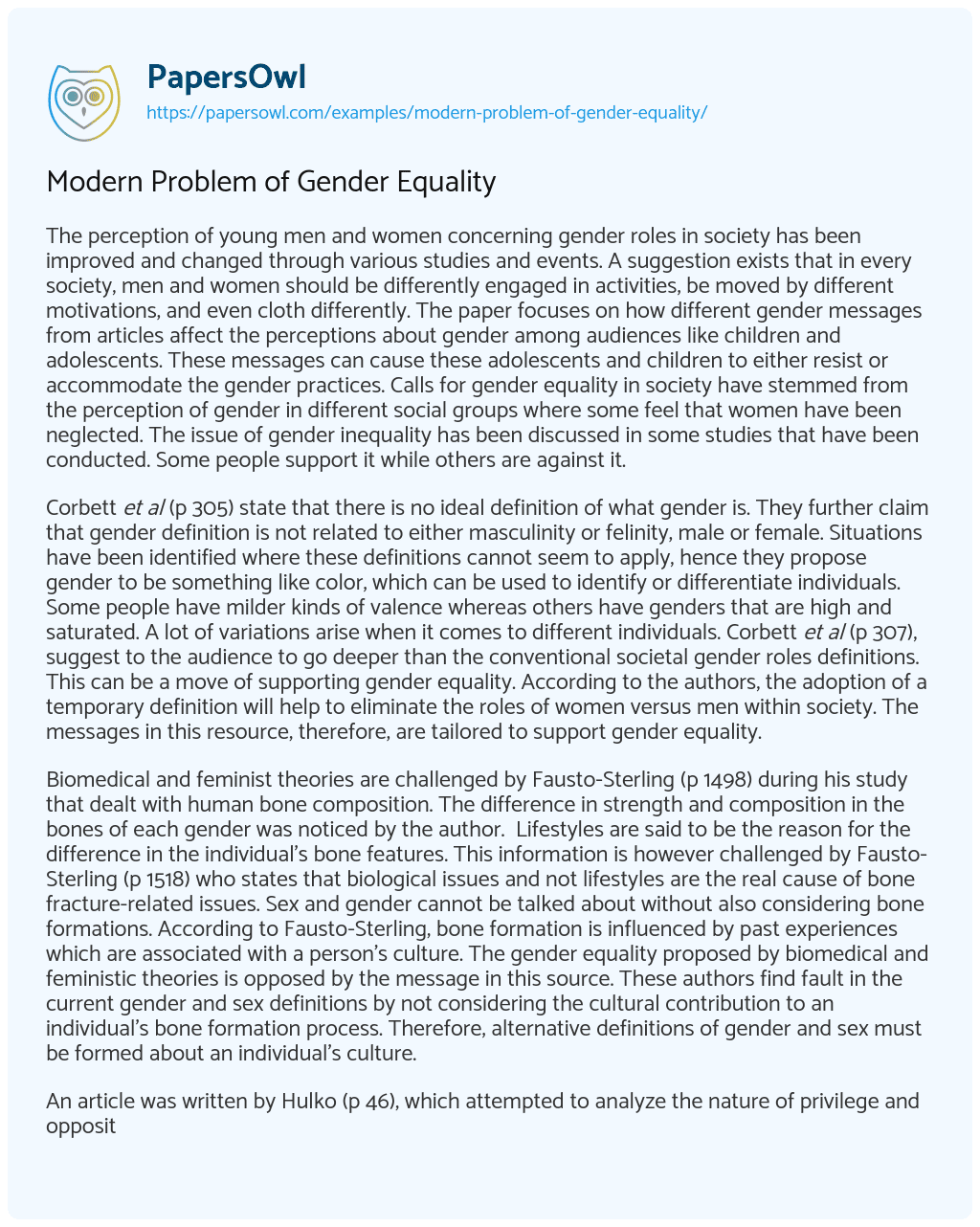 The perception of young men and women concerning gender roles in society has been improved and changed through various studies and events. A suggestion exists that in every society, men and women should be differently engaged in activities, be moved by different motivations, and even cloth differently. The paper focuses on how different gender messages from articles affect the perceptions about gender among audiences like children and adolescents. These messages can cause these adolescents and children to either resist or accommodate the gender practices. Calls for gender equality in society have stemmed from the perception of gender in different social groups where some feel that women have been neglected. The issue of gender inequality has been discussed in some studies that have been conducted. Some people support it while others are against it.

Corbett et al (p 305) state that there is no ideal definition of what gender is. They further claim that gender definition is not related to either masculinity or felinity, male or female. Situations have been identified where these definitions cannot seem to apply, hence they propose gender to be something like color, which can be used to identify or differentiate individuals. Some people have milder kinds of valence whereas others have genders that are high and saturated. A lot of variations arise when it comes to different individuals. Corbett et al (p 307), suggest to the audience to go deeper than the conventional societal gender roles definitions.  This can be a move of supporting gender equality. According to the authors, the adoption of a temporary definition will help to eliminate the roles of women versus men within society. The messages in this resource, therefore, are tailored to support gender equality.

Biomedical and feminist theories are challenged by Fausto-Sterling (p 1498) during his study that dealt with human bone composition. The difference in strength and composition in the bones of each gender was noticed by the author.  Lifestyles are said to be the reason for the difference in the individual’s bone features. This information is however challenged by Fausto-Sterling (p 1518) who states that biological issues and not lifestyles are the real cause of bone fracture-related issues. Sex and gender cannot be talked about without also considering bone formations. According to Fausto-Sterling, bone formation is influenced by past experiences which are associated with a person’s culture. The gender equality proposed by biomedical and feministic theories is opposed by the message in this source. These authors find fault in the current gender and sex definitions by not considering the cultural contribution to an individual’s bone formation process. Therefore, alternative definitions of gender and sex must be formed about an individual’s culture.

An article was written by Hulko (p 46), which attempted to analyze the nature of privilege and opposition. The author aimed at understanding the intersectionality and interlocking of oppression in society. Different groups of lesbians and women were subjected to interlocking types of oppression. To understand the connection that existed between the oppression experienced by different groups, the author used varied sources. According to Hulko (p 53), identity categories are indivisible, interactive, spatial, contingent, and temporary. An entry point for change could be brought about by the understanding of the nature and interconnectivity of the privilege and oppression elements.  For some groups in oppression to be saved, there is a great need for change to occur (Hulko, p 55). Understanding that the elements of oppression are temporary and interconnected is the first step toward this change. The author indirectly supports gender equality through his message.

Hyde (p 581) proposed that a great similarity exists in numerous psychological aspects between females and males. This differs greatly from the popular argument that states that many psychological aspects differ significantly between females and males. This is what is called the gender similarity hypothesis. Hyde (p 581) associates the perception that genders differ psychologically with many relationships and workplace problems. According to the gender similarity hypothesis, females and males are similar in most aspects, but not in all of them. Several studies support this information. The costs of perceptions that women and men are different must be considered. A lot of harm can be caused by these perceptions in many realms including the role that women should play in society. Hyde’s message strongly supports gender equality. According to her, it is costly to consider genders as different.

Mothers were noted to depict reactions when it came to their children’s behavior, according to a study done by Morrongiello and Hogg (p 113). Mostly, it was the sons who were punished by the mothers after engaging in bad behavior whereas for the daughter the mothers just expressed their disappointment with them for such mannerism. It was noted that mothers believed they could influence their daughter’s risk-taking behavior as opposed to that of their sons. This contrasts with research that suggests that more boys, compared to girls, are at risk of injuries. This information reveals some discrimination against boys as regards protection. This message, therefore, advocates for gender equality by pointing out the need for equal protection of children regardless of their gender.

The risk of gender stereotypes concerning abilities in Mathematics has been explored by Shapiro and Williams (p 177). They argue that parents and teachers transmit negative attitudes to girls regarding the abilities that women have in Mathematics. Gender-related mathematics attitudes are also said to be affected by environmental factors. Therefore, girls shrink away from careers in fields like technology, engineering, and science due to these negative attitudes (Shapiro & Williams, p 182). The social status of women can be influenced by their failure in these fields. The issue of gender inequality can therefore be dealt with by the information in this article. Mathematics stereotypes that are related to gender must be done away with, to empower women to improve their performance. It can therefore be concluded that these authors support gender equality in education.

Feminist theories can be informed by the aspect of intersectionality, as suggested by Shields (p 307). Intersectionality can be defined as the relationship between social identities. This can be said to be one of the primary elements of feminist theories currently. In the aim of improving the position of girls and women in society can be improved, one needs to understand the existing connection between the factors influencing gender. In modern feminist psychology, intersectionality plays a central role in the discussion of gender issues (Shields, p 310). According to the author, there must be information concerning factors influencing women and they must be linked. Scholars will be able to have an understanding of feminist theory effectively. Gender equality is therefore supported by this article’s message, which proposes a multidimensional approach to the study of women’s role within society.

Different messages from different authors regarding gender roles have been discussed in this paper. Findings from other studies have been used by these authors to discuss gender equality issues. Cultures have been noted to influence most of the societal gender roles. Gender equality has been supported by most of these messages as a way of improving the productivity of society. Gender inequality has been insisted on by most supporters of equality as having the potential to hurt the productivity of women in society. The messages presented by these articles are verifiable and can be useful in influencing adolescents’ and children’s perceptions of gender roles.