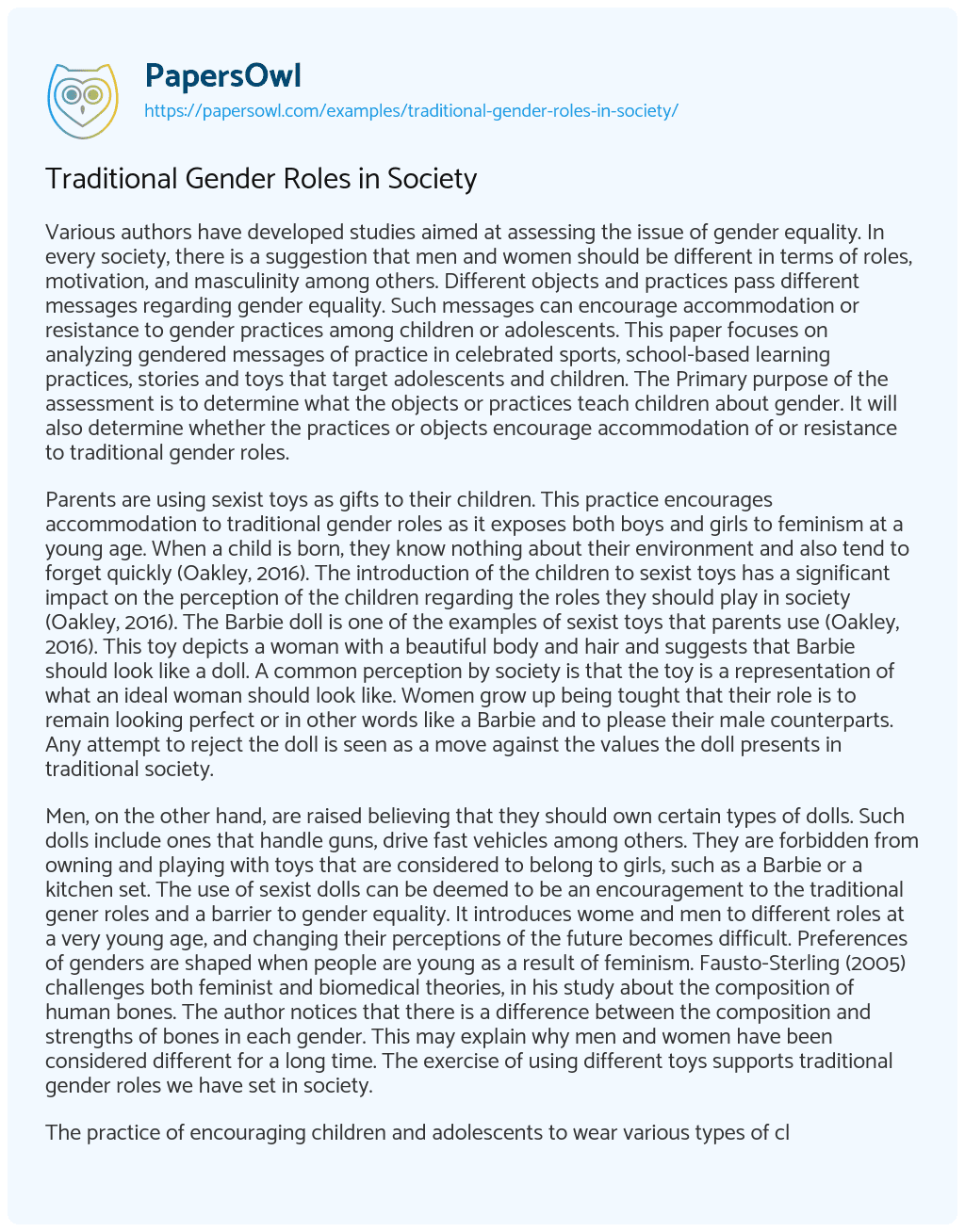 Various authors have developed studies aimed at assessing the issue of gender equality. In every society, there is a suggestion that men and women should be different in terms of roles, motivation, and masculinity among others. Different objects and practices pass different messages regarding gender equality. Such messages can encourage accommodation or resistance to gender practices among children or adolescents. This paper focuses on analyzing gendered messages of practice in celebrated sports, school-based learning practices, stories and toys that target adolescents and children. The Primary purpose of the assessment is to determine what the objects or practices teach children about gender. It will also determine whether the practices or objects encourage accommodation of or resistance to traditional gender roles.

Parents are using sexist toys as gifts to their children. This practice encourages accommodation to traditional gender roles as it exposes both boys and girls to feminism at a young age. When a child is born, they know nothing about their environment and also tend to forget quickly (Oakley, 2016). The introduction of the children to sexist toys has a significant impact on the perception of the children regarding the roles they should play in society (Oakley, 2016). The Barbie doll is one of the examples of sexist toys that parents use (Oakley, 2016). This toy depicts a woman with a beautiful body and hair and suggests that Barbie should look like a doll. A common perception by society is that the toy is a representation of what an ideal woman should look like. Women grow up being tought that their role is to remain looking perfect or in other words like a Barbie and to please their male counterparts. Any attempt to reject the doll is seen as a move against the values the doll presents in traditional society.

Men, on the other hand, are raised believing that they should own certain types of dolls. Such dolls include ones that handle guns, drive fast vehicles among others. They are forbidden from owning and playing with toys that are considered to belong to girls, such as a Barbie or a kitchen set. The use of sexist dolls can be deemed to be an encouragement to the traditional gener roles and a barrier to gender equality. It introduces wome and men to different roles at a very young age, and changing their perceptions of the future becomes difficult. Preferences of genders are shaped when people are young as a result of feminism. Fausto-Sterling (2005) challenges both feminist and biomedical theories, in his study about the composition of human bones. The author notices that there is a difference between the composition and strengths of bones in each gender. This may explain why men and women have been considered different for a long time. The exercise of using different toys supports traditional gender roles we have set in society.

The practice of encouraging children and adolescents to wear various types of clothing can also be considered to pass a message to both children and teenagers. The modern society prefers boys to dress in a particular way that is different from the girls (Oakley, 2016). This is also the case when it comes to girls. For example in one incident, a girl known as Claire breaks up with his boyfriend and tries to dress like a man, to try and change her feelings (Oakley, 2016). She says that men are easily tricked compared to women as they fail to notice her gender as a result (Oakley, 2016). When she sends a picture of her dressed as a man to her boyfriend, she seems not impressed to be her dressing (Oakley, 2016). This information shows that women are not allowed to wear as their male counterparts. The girl later chooses clothes that are feminine to please her boyfriend. The practice of clothing passes a message that supports the traditional gender roles whereby men and women were considered different in their dressing.

The division of work is another field that reflects gender roles in society. Here, men seem to have been left out of the conversation as it relates to the roles they play in society. Men are known to take up manual jobs to provide for households in contrast to women. Most of these jobs expose them to risks that have in the past resulted in injuries. While it may be seen as if they have taken all the opportunities at the expense of women, men are exposed to risks that make them die earlier than women. This may be considered an important issue when it comes to defining inequality. According to Corbett et al (2014), there is no ideal definition of gender. The authors state that the definition of gender is not related to femininity, masculinity, female or male. The roles allocated to genders have been hindrances to gender equality for the last few decades. The perception that men carry out the difficult tasks has continued to dominate in society. It has become increasingly difficult to incorporate women in sectors that are meant for men due to resistance from society. The perceived roles of men and women in the work environment can be considered to accommodate traditional gender roles.

The participation of both girls and boys in sports such as athletics has had significance in influencing the perception regarding gender roles. Both girls and boys participate in similar sports in schools (Pfister, 2010). This was not the case in the past the sports world was men dominate and women were limited from any sports activites. Weman were depicked as being on the sidelines as cheerleaders and supporters. Various studies and theories have been developed regarding the differences in gender. For example Corbett state’s that the definition of gender is not related to femininity, masculinity, female or male. There are many situations where these descriptions do not seem to apply and hence the authors consider gender to be something like color, to identify or differentiate individuals. Such studies may be considered to have contributed to the participation of women in sports. The inclusion of both men and women in sports passes an essential message to teenagers and women. The message is that both men and women have equal capabilities. It, therefore, rejects the inclusion of traditional roles of gender in contemporary society.

This paper has highlighted different practices and events and their roles in influencing gender perceptions. Teenagers and children are exposed to different events, toys and stories. Each of these elements is likely to carry a message that supports the traditional gender roles. Various gender-based philosophies can also be utilized in analyzing these events and messages. The hypotheses present messages that are useful and can be used to verify the influence of the messages and events on gender perception.