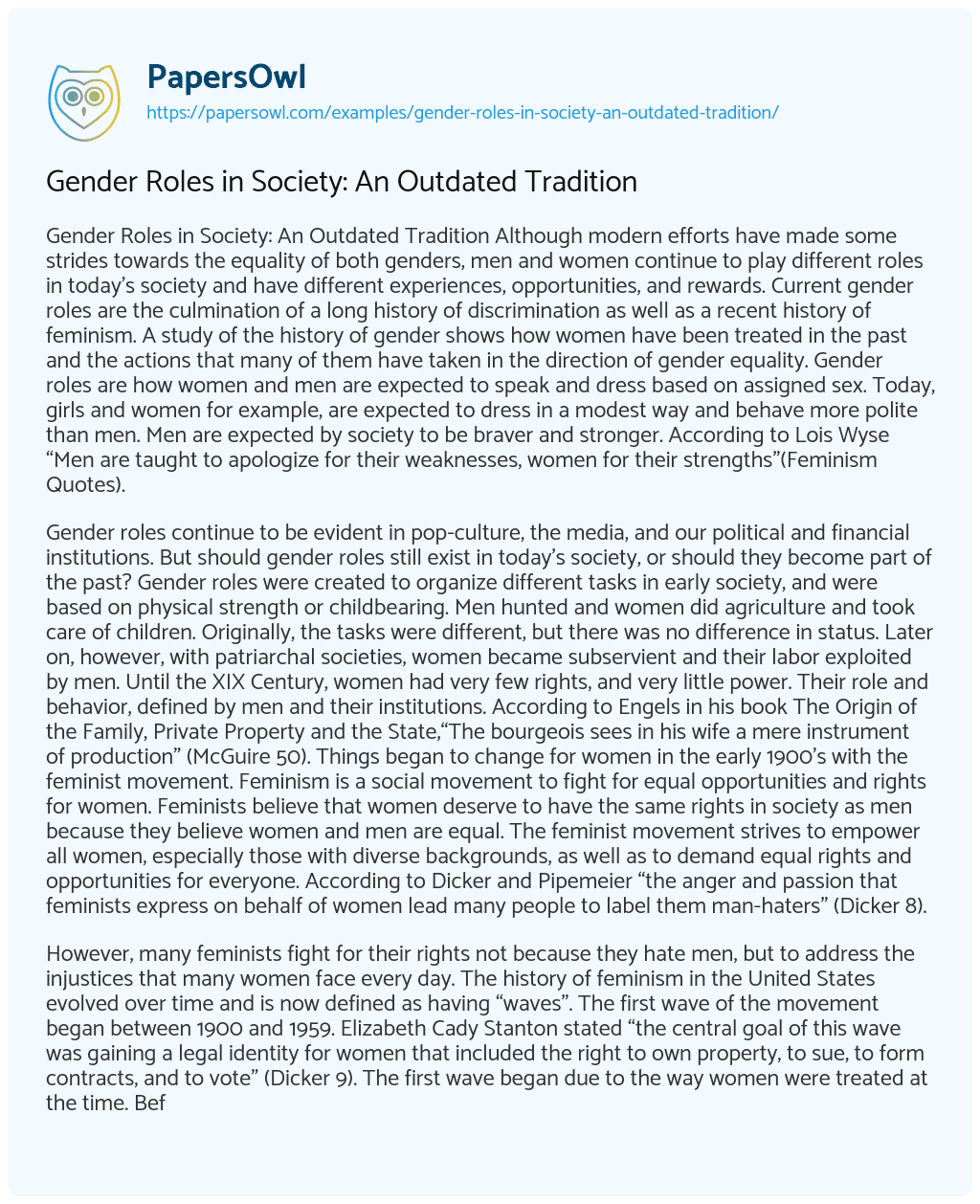 Gender Roles in Society: An Outdated Tradition Although modern efforts have made some strides towards the equality of both genders, men and women continue to play different roles in today’s society and have different experiences, opportunities, and rewards. Current gender roles are the culmination of a long history of discrimination as well as a recent history of feminism. A study of the history of gender shows how women have been treated in the past and the actions that many of them have taken in the direction of gender equality. Gender roles are how women and men are expected to speak and dress based on assigned sex. Today, girls and women for example, are expected to dress in a modest way and behave more polite than men. Men are expected by society to be braver and stronger. According to Lois Wyse “Men are taught to apologize for their weaknesses, women for their strengths”(Feminism Quotes).

Gender roles continue to be evident in pop-culture, the media, and our political and financial institutions. But should gender roles still exist in today’s society, or should they become part of the past? Gender roles were created to organize different tasks in early society, and were based on physical strength or childbearing. Men hunted and women did agriculture and took care of children. Originally, the tasks were different, but there was no difference in status. Later on, however, with patriarchal societies, women became subservient and their labor exploited by men. Until the XIX Century, women had very few rights, and very little power. Their role and behavior, defined by men and their institutions. According to Engels in his book The Origin of the Family, Private Property and the State,“The bourgeois sees in his wife a mere instrument of production” (McGuire 50). Things began to change for women in the early 1900’s with the feminist movement. Feminism is a social movement to fight for equal opportunities and rights for women. Feminists believe that women deserve to have the same rights in society as men because they believe women and men are equal. The feminist movement strives to empower all women, especially those with diverse backgrounds, as well as to demand equal rights and opportunities for everyone. According to Dicker and Pipemeier “the anger and passion that feminists express on behalf of women lead many people to label them man-haters” (Dicker 8).

However, many feminists fight for their rights not because they hate men, but to address the injustices that many women face every day. The history of feminism in the United States evolved over time and is now defined as having “waves”. The first wave of the movement began between 1900 and 1959. Elizabeth Cady Stanton stated “the central goal of this wave was gaining a legal identity for women that included the right to own property, to sue, to form contracts, and to vote” (Dicker 9). The first wave began due to the way women were treated at the time. Before the 1900s, a woman’s virtue was measured by her devotion for religion, sexual purity, and willingness to subdue to their husband or any other man. Another problem that many women faced was their loss of independence and identity, especially after marriage, as they had to change their “maiden” name, and having their legal name written with their husband’s last name. In addition, “if you desired more education, you were viewed with suspicion and called a bluestocking” (Dicker 21). Many intellectual women that fought for women’s rights were violated in the workforce just because they were trying to make a more equitable society. Many U.S. women between the 1970s and 1980s created a second wave in response to the first wave.

Focussed on the woman’s right to control her own body, on reproductive rights, reducing disparities in sexual behaviors, the work in the household, representation in social institutions. The movement became global and rose in importance in places like Asia and Europe. Moreover, marital rapes and domestic violence were issues that the second wave of feminism wanted to address. The second wave movement began with The Feminine Mystique a book made by Betty Friedan. According to Friedan, “changeless woman, childish woman, a woman’s place is in the home, they were told. A woman was being left behind” (Friedan 138). The author of the book talked about the problem with systemic sexism that made women believe that their job was to stay home. Women started thinking that they were broken and perverse if they did not want to follow the traditional stereotypes. Third wave feminism focused on how race, class, religion, gender, and nationality are also important factors in feminism. The new wave included the notion that race, gender, class, sexuality, and ethnicity are connected. Oppression does not only exist in a women’s household but also in their workplace. Krolokke and Anne Scott Sorensen argue, “Second Wave feminism has come under attack from other marginalized groups, such as African American women and lesbians, for not including them” (Maxwell 3). Henry stated that “third-wave feminism is frequently presented as a racially and ethnically diverse movement, with black women moved from the margin to the center of this new wave” (Henry 163).

Many women of color joined the Chicana feminist Cherrie Moraga. Chicana is an identity for Mexican Americans who live in the United States. They wanted to express their concerns that gender inequality not only happened to white middle-class women but also to other ethnicities. Another important aspect of the third wave is reproductive/abortion rights. Dicker stated that the “Hyde Amendment prohibited the use of Medicaid funding for abortion services, except in cases of rape and incest or if the mother’s life was threatened by the continuation of the pregnancy” (Dicker 105). As a result of the amendment, many lower class women could not afford to pay for abortions. Despite the progress made, many people still believe in the traditional ideas that women and men should behave in specific ways, or fit into specific categories determined simply by their gender. Still women do not equal pay, nor are they represented equally in the economy, the institutions or the government. However, gender roles are not based on people’s natural behaviors or capacities. Gender roles should not exist in today’s society even if they have been part of our culture for many centuries. A modern gender role is required because the “traditional” gender roles are limiting and discriminate. Gender roles stunt the progress of an equal society, and lead people to believe that they may be flawed just because they do not fit the social gender role expectation.